Addendum 1 (Illustration added at the beginning): 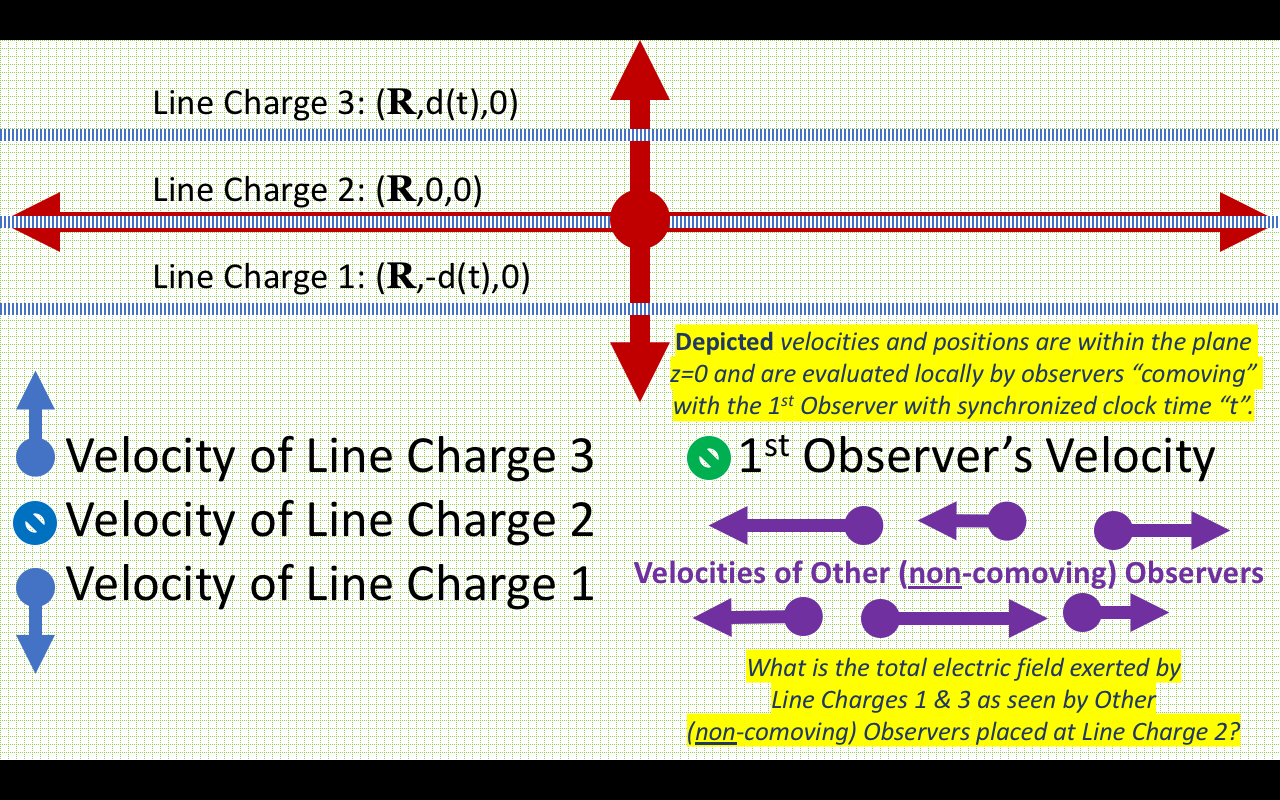 Suppose I had 3 identical parallel line charges parallel to the x-axis of infinite length in the same geometric plane.

The first and third line charges are equidistant from the second.

Now suppose I have a series of observers that have different velocities which vary only along the x-axis (i.e. differences in the x-component of velocity only).

However, the others would observe such electric fields directed along the x-axis.

How do we ensure there is no acceleration of the second line charge despite the electric field exerted on it in the x-direction? Is its momentum affected due to the varying "electric potential" therefore "mass" in some compensating way, ensuring no acceleration, as in (mv)' - m'v = mv' = 0?

One should consider how a neutral wire with an electric current can be represented by the superposition of two line charges with equal and opposite linear charge densities while having different velocities. Notice that in the bottom half of the illustration below labeled "Test charge frame:" (in red) it shows an electric field with a component parallel to the wire that exists because the positive charges contribute to it and yet the negative charges do not negate that contribution. From http://physics.weber.edu/schroeder/mrr/mrrtalk.html

As I said in my comment, you need special relativity to transform the components of the $\mathbf E$ and $\mathbf B$ fields. They transform according to $$ \begin{align} \mathbf E'_{||} &= \mathbf E_{||} \\ \mathbf B'_{||} &= \mathbf B_{||} \\ \mathbf E'_{\perp} &= \gamma (\mathbf E_\perp + \mathbf v \times \mathbf B_\perp) \\ \mathbf B'_{\perp} &= \gamma \left ( \mathbf B_\perp -\frac{1}{c^2} \mathbf v \times\mathbf E_\perp \right ) \end{align} $$ where the primed quantities denote the (total) fields at a frame moving with velocity $\mathbf v$ relative to your original frame ($\mathbf v$ is the velocity of any observer), $\gamma$ is the Lorentz factor and the subscript $||$ denotes the component parallel to $\mathbf v$ and $\perp$ the perpendicular component. As you can see, the parallel components remain the same, so no acceleration in the $x$-direction will be measured by any observer. The cool stuff happens in the second figure, where a magnetic field is created whose force exactly counterbalances the electric force in order to don't accelerate the charge.

Not the answer you're looking for? Browse other questions tagged newtonian-mechanics electrostatics charge or ask your own question.

5
Force between two point charges moving parallel to each other
1
"Rotating any system of charges causes a corresponding rotation of the electric field."- What is the proof?
1
Electric Field of Superposition of Line Charges to Form an Equilateral Triangle
1
Why do charges redistribute themselves on parallel conducting plates? Vector field vs field line view?
1
Physical example of line charge
0
How do surfaces charges accumulate?
0
Possibility of Nonzero or All Azimuthal $E$ Field Component of a Line Charge enclosed by a Gaussian Cylinder
1
Why does the charge goes down the line?