Question about Earth being round, and whether a hypothetical scenario could be true [closed]

I am in no way, shape or form a physicist. This is a question I was debating in my head, and has nothing to do with flat Earth or protesting the Earth is not indeed round. I have a simple question involving how we determine the Earth is round using instruments and mathematics and applying that to a hypothetical scenario.

Using the instruments, math, and other techniques we use today to determine the Earth is indeed a sphere or round. Say the southern hemisphere or the bottom half of this hypothetical Earth was not complete, it was missing parts but yet still partly intact due to a planet collision millions of years ago that struck only the bottom half of earth (southern hemisphere). Imagine parts intact.

Would the math, readings and methods we use to determine the Earth is round even when parts of the bottom half of our Earth are missing still read as a sphere or completely round?

Now, this paint drawing is pathetic: I am not an artist. But I hope this helps give off a slight idea of what I am asking. 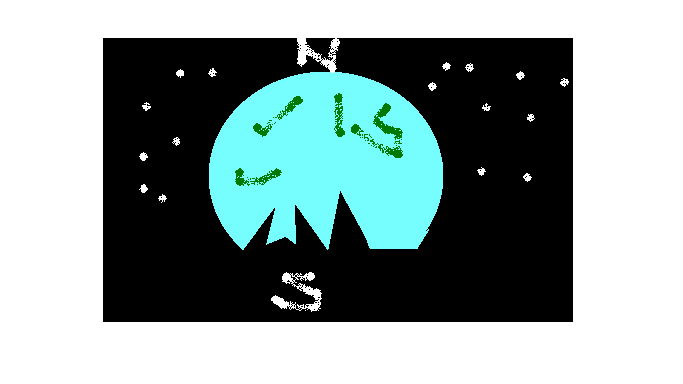 For those who would just say where is the rest of the Earth that was knocked out of place, I would say asteroid belt.

Determining the shape of the Earth is not something you describe with any completeness in this forum. Which shape are you talking about? The topography or the gravity field? Each is a separate field of research, with many different methods.

First, the Earth is not a sphere. While a sphere is the lowest energy solution of a self-gravitating body, the Earth spins, and spinning leads to an equatorial bulge. The bulge is usually handled by approximating the shape as an oblate spheroid. Since the Earth is bumpy and uneven, there isn't an unambiguous choice for that spheroid, but a very popular one used by GPS is WGS84, defined by the semi-major axis and the inverse flattening:

Nevertheless, there have been many defined since at least 1738 (Maupertuis). Some are global, others work better regionally. The most recent one is IERS (2003):

So once you have that, you still don't have the Earth's shape: there is a bumpy surface. Historically, high resolution maps have been local, in local coordinate systems, and not consistent with other maps from other regions. That is, if you went around the World and collected local maps and made them into one single map in a unified coordinate system, you'd have gaps, cliff-artifacts, and non-physical overlaps. This all changed with NASA's STS-99, the Shuttle Radar Topography Mission (SRTM).

SRTM used interferometric synthetic aperture radar (InSAR) to map a large portion of the Earth's surface at DTED level 0 (30 arc second posting) in a single consistent coordinate system. It has since been extended to the entire globe in a product called NASADEM.

At this point we know the Earth is round because we have the entire surface mapped digitally in a single coordinate system (WGS84).

Note that this is insufficient for actual map users because the gravity field is not spherically symmetric. There are inhomogenaities in the core, mountain ranges, and trenches that cause the imaginary level surface (mean sea level extended through the continents) to vary by hundreds of meters. Sea level actually goes down over deep ocean trenches because there is less gravity. Likewise, it goes up over seamounts, because there is more gravity.

There are myriad techniques used to solve for the geoid. One is satellite orbit metrology: the GRACE mission for example, is so sensitive, it can detect the gravity from the Amazon river in flood stage. It would certainly see a hole in the Southern Hemisphere. Anyway, once the gravity is known, it is published as "The Geoid" (at least the unclassified version is). Of course, it too is ambiguous, and there are many geoids in use. EGM96 is popular, while the "new" geoid is EGM2008.

(Note: the speed and direction of rotation, or location of the poles and length of the day, are also variable and active areas of modeling, measurement, and research.)

As has been mensioned in Solomon Slow's comment the scale of missing crater you have in your sketch is not acceptable for various reasons.

-Structurally the materials earth is made of can not support themselves under their own weights and will be crushed and collapse to a round shape which will fill the huge canyons.

-At the scale your sketch indicates the molten core of the earth which we usually see frozen after a volcanic eruption, lava, and even the hot and high pressure liquid iron would be exposed and annihilate the atmosphere and life.

-There is actually one theory which explains the creation of moon as the outcome of a planet, or astroid, likely the size of Mars that collided with earth early after the creation of the solar system, and blew a big chunk of material away from the earth which later cooled off as moon, ( The Giant Impactor Theory). But even that big crater left, eventually healed to the rounded earth.

The reason that planets and heavenly objects bigger than a certain size are round is gravity. Many theories believe that the planets mostly are created of their solar system rotating ring of dust colliding and coalescing into big masses which then pulled and attracted more dust to grow larger and because of gravity they formed into spheres.

-As an example let's imagine an astroid getting big enough to have substantial gravity is still not round and is elongated. If its orbit crosses a cloud of dust particles, they tend to get attracted and stick to it's narrow middle more because they hit closer to its center of gravity, where it's more strong, and build it into a round shape.

Not the answer you're looking for? Browse other questions tagged experimental-physics earth planets or ask your own question.

153
Simple check for the global shape of the Earth
62
What is the simplest way to prove the Earth is round?
23
Backyard experiments to falsify the Flat Earth theory

3
Basic question about probability and measurements
6
If the Moon had gravity as good as the Earth and a magnetic field could it have supported life?
1
What geological properties of the earth could we deduce by measuring magnetic field strength and direction?
2
about the rotation of the earth and gravity, when all continents were merged
1
about angle between magnetic axis and geographical axis of earth
3
What are the problems with using spirit level experiment to prove the flat-earth theory?
1
Question about spinning Earth
0
Question about the Normal Force exerted by Planet Earth in relation to centripetal force