I am confused about what the Clausius-Clapeyron equation is saying basically. I learned it from Finn's Thermal Physics textbook. Here is the illustration they used to derive it. 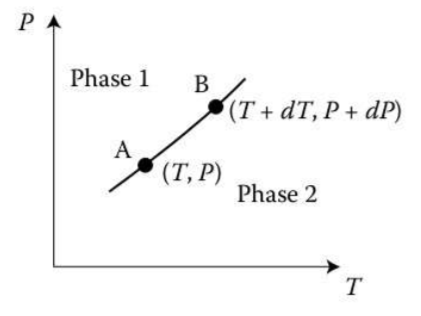 Matter of two different phases can only coexist when they have the same specific gibbs function.

I'm not sure why this is necessarily the case, but Finn merely states this.

From the previous equation, via a Taylor expansion and the thermodynamics identity for G,

The mathematics of arriving from the equation in terms of specific gibbs functions and to the final result is fine with me, but I don't actually know what this represents. To me, it is one of two things:

But, to be honest I really have no idea what this is. I understand the mathematics but not the underlying principles here.

For instance, for these two graphs:

I am confused about what the Clausius-Clapeyron equation is saying basically.

The equation is telling you about the slope of the pressure against temperature graph when two phases coexist with one another.

If $L$ and $\Delta V$ do not change by very much over a certain temperature range then integrating your equation gives $P_2-P_1 = \dfrac {L}{\Delta V}\ln{\dfrac{T_2}{T_1}}$ so if you have knowledge of one point on the graph, $(P_1,T_1)$, the (Clausius-)Clapeyron equation enables you to find other points $(P_2,T_2)$.
In other words the prssure and the temperature are not independent of one another.

I'm not sure why this is necessarily the case, but Finn merely states this.