I'm currently reviewing electricity for the AP Physics C exam, and came across a problem or general topic I don't really understand that has to do with Gauss's law.

So when the enclosed charge is 0, as in the case of a hollow spherical shell with uniform charge distribution, it follows that the electric field is zero in the sphere.

However, when the charge distribution becomes non-uniform, the enclosed charge is still zero, implying that the electric field is still zero. However, if all the charge on the sphere is moved to one side, there should be an electric field directed from one hemisphere to the other. I'm wondering how this application of Gauss's law here is wrong and why.

When writing up this question I found this link: Gauss' Law- Hollow Sphere with Non-Uniform Charge Distribution where someone answered a similar question. However, I still don't understand why if flux is zero it does not mean the electric field is zero. Please keep in mind that I only have taken Calculus up to AP Calculus BC, which I think roughly corresponds to Calculus II.

However, I still don't understand why if flux is zero it does not mean the electric field is zero.

Let's look at a simple example. What is the value of the following integral? $$\int_0^1 (3x^2-1)\text d x$$ If you do the work (help you with your AP calculus) you will find that the integral is $0$. Yet the integrand is not $0$ along the entire interval we are integrating over.

To drive it a little further, imagine I told you I'm thinking of 10 numbers that add up to 100, and I asked you to tell me what the 10 numbers are. You would have no way to know. However, if I give you some more information, like that the numbers are all equal, then you could determine the numbers. The integral is essentially an infinite sum, and if all I told you was the value of this sum then you would have no idea what the terms were that I used to get that sum.

The electric field bit is easy.

What is more difficult is to show that the net electric flux through the Gaussian surface, which is a sphere, is zero. 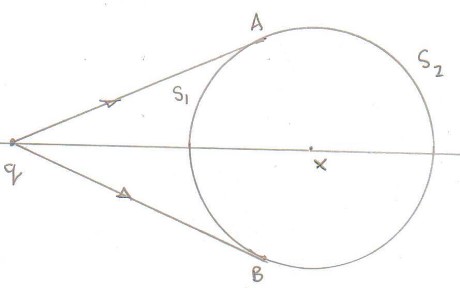 A Gaussian surface I can deal with mathematically is shown below as in read $ABCD$.

It consists of two spherical caps $S_1$ and $S_2$ of radius $r_1$ and $r_2$ and a surface $S_3$ which joins the two caps and which is along (parallel to) the electric field lines originating from the charge. 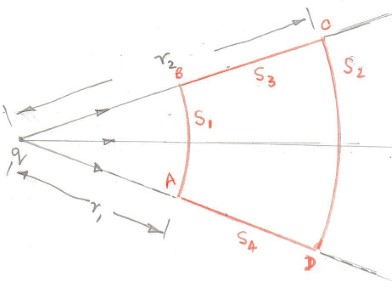 The reason for choosing the caps is that because the electric field is radial and so will be at right angles to the surface of the cap and the areas of the caps $A'$ is proportional to the square of the distance of a cap from the point charge $r^2$ ie $A' \propto r^2$.

There is no electric flux through surface $S_3$ as the electric field is along the surface.

Generally, at some points of the surface over which you integrate $\vec E \cdot \vec A $ is positive and at others it is negative. In the case that no charge is included that is $\vec \nabla \cdot \vec E =0$, it can be mathematically proven that it is zero on average.