Pair creation and annihilation and Wheeler's one electron universe

Nevertheless taking inspiration from this idea I wondered whether it is possible to interpret a pair creation of electron and positron followed by pair annihilation as one electron moving in a timeloop continuously absorbing and emitting photons.

I wondered whether it is possible to interpret a pair creation of electron and positron followed by pair annihilation as one electron moving in a timeloop continuously absorbing and emitting photons.

This phenomenon actually exists and is called vacuum polarization. You can imagine it as one electron moving in a loop, as visualized by the following Feynman diagram. However, it doesn't mean that an infinite number of photons is absorbed and emitted.

It just means that a traveling photon occasionally can turn into an electron-positron pair, and a short time later the pair turns back into a photon again.

There are other processes also involving a closed electron-loop. 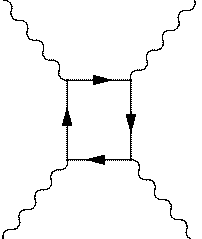 Not the answer you're looking for? Browse other questions tagged particle-physics quantum-electrodynamics time-travel pair-production closed-timelike-curve or ask your own question.

1
How can nuclear decay both annihilate and create?
6
Positron-electron annihilation - can more than two photons be created?
9
How does gamma-gamma pair production really work?
0
Spontaneous Creation of Electron and Positron Pair
3
How about a one-proton universe?
1
Electron-positron annihilation/creation
1
Is positron creation operator times electron creation operator equal to the ground state?
0
Can positrons emit photons like electrons do?