Is Sun brighter than what we actually see?

I learned from that plasma can reflect radiations of frequency less than that of its own oscillations. If so, considering the plasma in Sun's atmosphere, it should also reflect solar radiations. 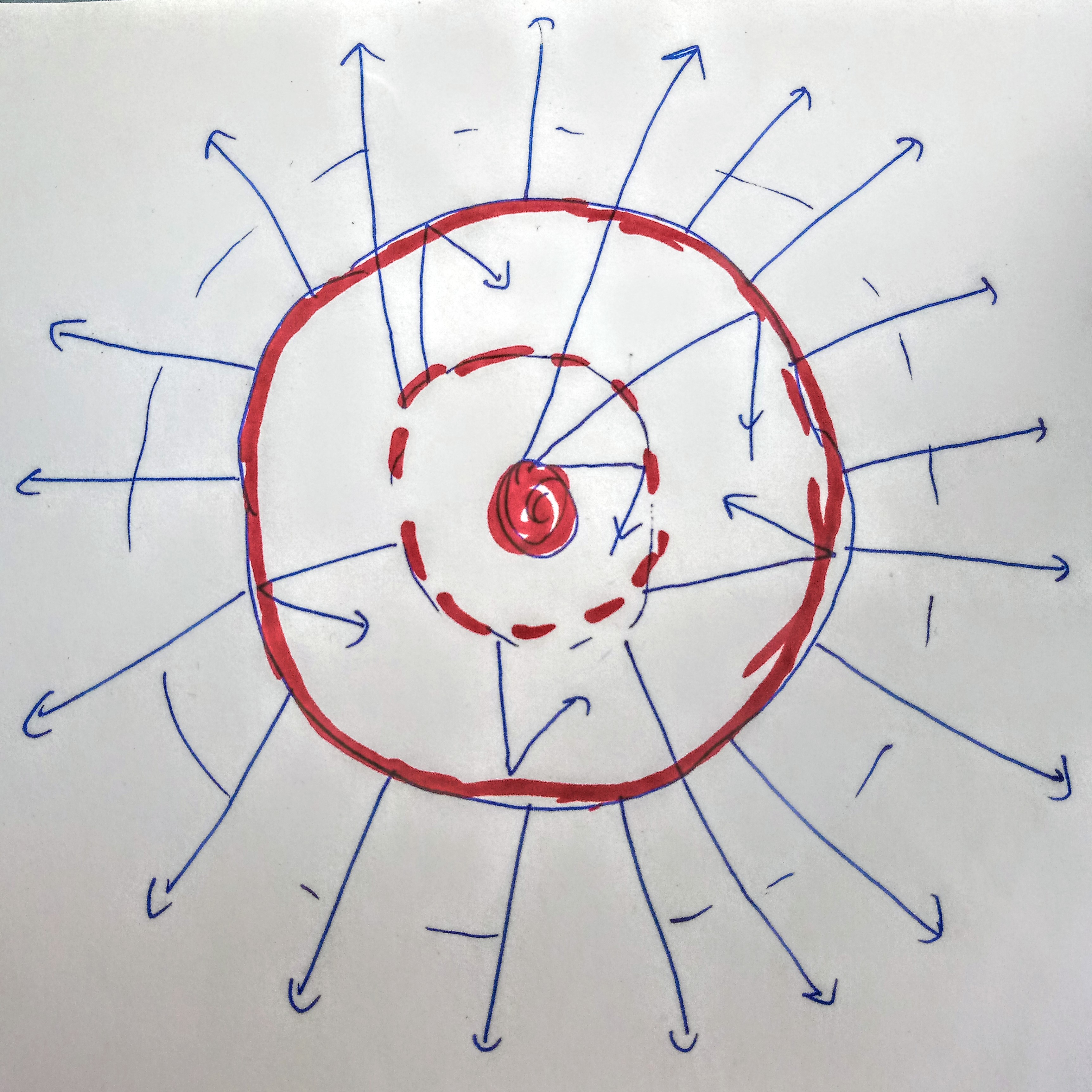 That would mean that the radiation emitted from the inner layers of the Sun would be reflected back by the outer layers. So, the only radiation coming out should be the ones generated at the outer layers, for which there is no denser layers of plasma surrounding it. And of course, the ones that have higher frequencies than the plasma in each layer would come out unscathed.

If this is true, most of the radiation generated by fusion will be trapped inside, and what we observe is only a fraction.

Note that the intensity of observable radiation coming out from stars would now mostly depend on the outermost layer. So, wouldn't it be inappropriate to consider stars as Black bodies while determining their temperature and other properties? Is Sun brighter and hotter than what we see from outside?

Note that the intensity of observable radiation coming out from stars would now mostly depend on the outermost layer.

Because the material in the star is opaque, it completely depends on the outermost layer. Of course the properties of that layer (such as its temperature) are driven by the energy coming from the interior.

So, wouldn't it be inappropriate to consider stars as Black bodies while determining their temperature and other properties?

It is appropriate for an object that has a spectrum that closely matches a blackbody spectrum. However the only property that describes is the temperature of the visible layer. It doesn't imply anything about the interior and processes that produce and distribute energy. You shouldn't read blackbody and think that means that the (invisible) interior is simple or in some way similar to the exterior.

The sun's interior is much hotter than the exterior (around 15 million Kelvin in the core, compared to the 6000 Kelvin or so at the photosphere). Because it is not visible, I would hesitate to call it "brighter". But you could consider it that way.

Yes, you are looking at the outer layer

All the heat and light from the Sun is emitted by that outermost layer, which is essentially opaque to the processes going on inside it. The solar spectrum is a very good fit for a black body, and thus a black body temperature calculation applies to the surface of the Sun. It's not that hot, at around 5700 K.

Yes, inside it gets hotter. A lot hotter

5700K is not hot enough for fusion, unfortunately. As you correctly guessed, most of the light generated in the core stays there. At the core, the temperature is millions of Kelvin, and more than a hundred times the density of water as a plasma.

Remember the Sun is a big gas/plasma ball

The size of the Sun is governed by the balance of forces; outward pressure from the plasma which wants to expand vs inward pull of gravity. If there was more energy generated, that would tend to make the ball expand - there's no 'surface' to constrain it. So the surface and its properties are entirely a product of the energy being generated within the ball, and in fact largely at the core.

The Sun is in a (broadly) stable state - it's not getting bigger or hotter. And the energy released by fusing nuclei doesn't have any other place to go; it's not going to go back into the heavier nuclei and split them up. So if the Sun is stable, that energy must all be flowing out in one way or another.

We know, then, that the total energy being emitted by the Sun's surface is equal to the amount of energy being released by nuclear interactions at the Sun's core.

We aren't saying the Sun is just a hot blob

By modelling the Sun as a black body, all we are saying is that we can see its spectrum matches that of a generically hot thing at a particular temperature, and from there (and some assumptions about it being basically the same in all directions) we can work out the total power output of the Sun. We haven't had to make any assumptions about what's going on inside the Sun, only observe what reaches us and infer what must be coming out overall.

We know some things; how much power the Sun is producing, how big it is, the proportions of atomic species at the surface (from the details of the spectrum), its overall mass, the laws of gravity and the behaviours of plasmas. From that we have to try to model what must be happening inside.

We have inferred, for example, what the dominant nuclear processes inside the Sun must be; we know the temperatures and pressures are not high enough for some cycles, but high enough for others.

The following is a nuanced side point but relevant.

Is Sun brighter than what we actually see?

The short answer is yes.

The longer answer is also yes, but for a subtle reason. The solar spectrum actually peaks in green visible light (e.g., see https://physics.stackexchange.com/a/137202/59023). We do not see a green star, however, because our eyes do not filter other frequencies and they have their own nonlinear response function that depends upon frequency. Because the response is not flat in frequency and it does not cover all frequencies, the total brightness "measured" by our eyes is not the same as that emitted by the sun.

I will admit that this is a nuanced point and not directly related to the intention of the original question, at least from what I inferred. However, it is an important point to remember, namely, that our eyes (and ears) do not have flat response functions. We actually see yellow better than green, surprisingly.

Is Sun brighter and hotter than what we see from outside?

Brightness and hotness are somewhat subjective things here if we are asking about what any given human perceives (i.e., because it requires the verbal/written/signed description from the individual in question). Further, as an example, object A can be much hotter than object B but be perceived as dimmer depending the primary frequency at which the object emits radiation and the response of the receiver.

Suppose the receiver is a telescope with spectral line filters and something like a Gaussian response centered on the spectral line peak frequency. If not properly calibrated, a signal could appear to increase then decrease in intensity simply because it scanned the frequency range of the filter. To account for this, one tries to properly calibrate so that things like brightness correspond to some measure of the number of photons (or flux or similar measure) received, i.e., quantify it so it can be compared and tested against other observations.

To address the specific part of your question relating to the "outside" comment, the sun is a perfect illustration of why this criteria is misleading. The core of the sun, as BowlOfRed already stated, is ~4,500 times hotter than the surface (i.e., the photosphere). The outer atmosphere (i.e., the corona) is ~170 times hotter than the surface but you cannot see it as it is so much dimmer than the surface. One needs a coronagraph to view the visible light spectrum of the corona. The corona is so hot it actually radiates in the UV and x-ray frequency range. Again, you could never observe this as it is outside the range of frequencies to which your eye can respond.

So to answer your question, yes, the sun is both brighter and hotter than what you can see. Further, it is hotter further inside AND outside but you cannot see either region with the naked eye (you can see the corona during a total solar eclipse for ~few minutes).

Not the answer you're looking for? Browse other questions tagged astrophysics radiation thermal-radiation plasma-physics or ask your own question.

68
Why is the sky never green? It can be blue or orange, and green is in between!

5
The Sun Can Make Stuff Hotter Than Itself
6
Radiation pressure on a Dyson sphere
8
Jupiter radiation belt: where >MeV particles comes from?
12
Which color of an umbrella is more effective against sunlight?
10
How does the sun's surface conduct thermal energy from the convective zone to the corona?
2
Energy transport mechanism in stars
19
Why do main sequence stars get bigger and more luminous as they age?
1
Trouble understanding exactly why core of sun does not mix with outer layers
1
Could anything ever be brighter than the sun in our sky?