Why isn't the circumferential light around the M87 black hole's event horizon symmetric?

After the revelation of the first black hole images, it seems there is a bias towards the south side. Is it because of measuring it from earth or is it something more fundamental in the understanding of gravitation? 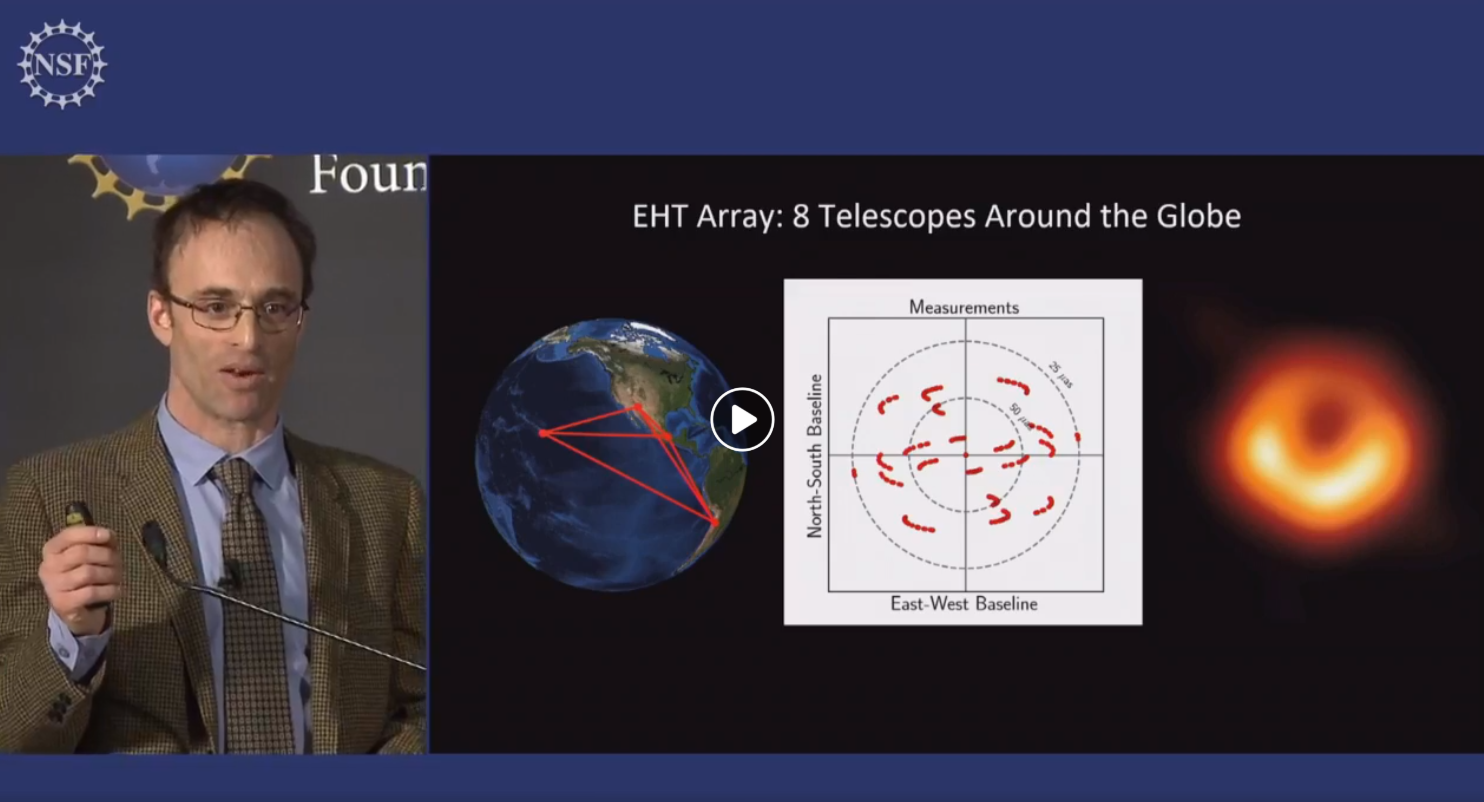 The pictures below from the fifth event horizon telescope paper makes things clear. 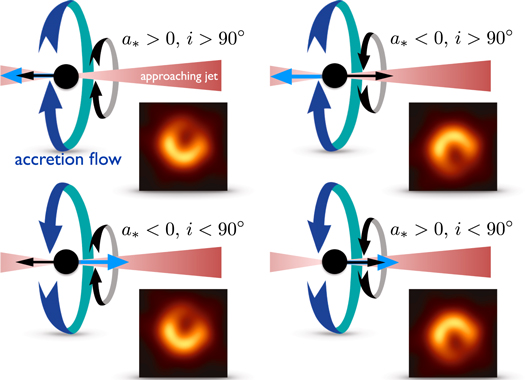 The black arrow indicates the direction of black hole spin. The blue arrow indicates the initial rotation of the accretion flow. The jet of M87 is more or less East-West (when projected onto the page - in fact I believe the projected jet axis position angle should be more like 72 degrees rather than 90 degrees), but the right hand side is pointing towards the Earth, with an angle of about 17 degrees between the jet and the line of sight. It is assumed that the spin vector of the black hole is aligned (or anti-aligned) with this.

As the paper says: "the location of the peak flux in the ring is controlled by the black hole spin: it always lies roughly 90 degrees counterclockwise from the projection of the spin vector on the sky."

EDIT: Having read a bit more, there is a marginal (1.5 sigma) discrepancy between the large scale jet orientation, which should be at about a PA of 72 degrees (measuring to the right) from North in the observations and the deduced orientation of the black hole spin axis which is around $145 \pm 55$ degrees measuring from the same datum line.

My original answer below is wrong, see the correct answer of Rob Jeffries. The author of the OP 0x90 asked me to not delete this answer and instead explain why it was wrong. Perhaps this can be a teachable moment in how the EHT pictures can be misinterpreted.

You can compare with this image from the 5th paper of the ApJ Letters "First M87 Event Horizon Telescope Results. V. Physical Origin of the Asymmetric Ring", which shows one of the best-fit theoretical simulations alongside the observed image:

There is a number of other effects at play, though. You see only a narrow frequency band, so once the light is shifted by the Doppler effect to a different wavelength in either direction, or when the plasma has the wrong temperature, you stop seeing it in the image. An additional general-relativistic effect is a "space-time push" the rotation of the black hole gives to co-rotating photons, which causes a slight west-east asymmetry in the image as well.

Explanation why the above is wrong:

As already noted, the what we see in the EHT image reconstruction is not just any image, it is a representation of the strength of a radio signal at almost exactly 1.3 mm in wavelength. Even though it is rendered in yellow to orange color for intuition, it is not an ordinary image of an object over a continuous spectrum and the radiation of the plasma ends up being much more directional and specific than you might usually expect. Another ingredient that greatly complicates the understanding of the image are relativistic effects. For example, often the emission from behind a black hole turns out to outshine anything in front of it! Even judging a slightly blurred numerical simulations without additional knowledge requires a great deal of direct experience with the problem.

The crucial mistake I made was the assumption that the image would always be rotated so that the assumed spin axis is pointing north. This is how every numerical simulation result is presented and I have been fooled by doing too much theory to think differently. Naturally, if they do not even know where the spin axis is pointing and have at best a blurry idea, it is better to plot with respect to a standard system of celestial coordinates, which happened in the EHT image.

Now let me expand on Rob Jeffries answer to contribute to the picture of how the image emerges. I extracted and rotated this picture from simulations of Monika Mościbodzka and other EHT collaborators (2014, A&A): 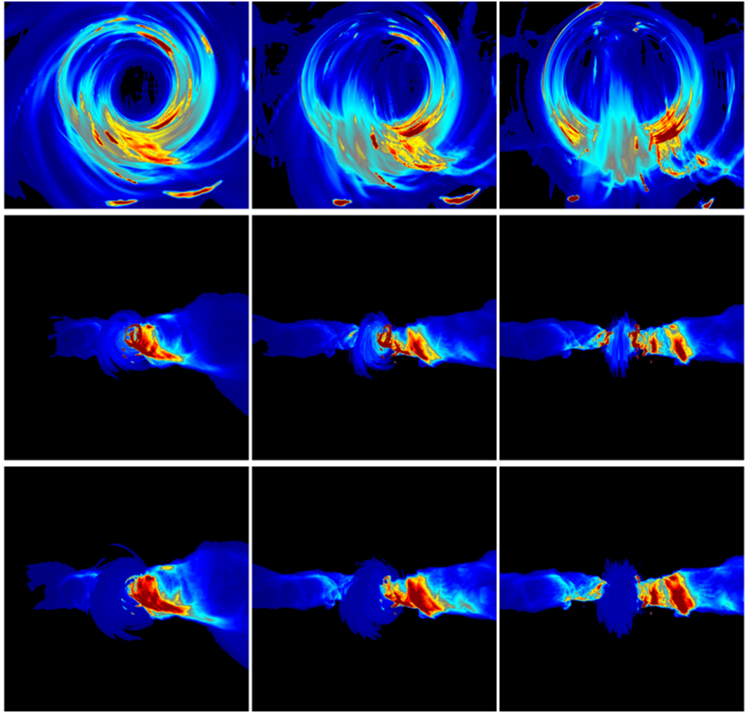 In this picture you see simulation results where the jet as well as the black hole spin are tilted in various ways with respect to the observer (the jet and spin are always aligned here). The tilt is the same in every column, and every row represents a different magnification and wavelength of observations. You see that when the plasma is moving toward you, it appears brighter. This is relativistic Doppler beaming. There are various components to the image, including not only the disk but also the jet.

If the disk was edge on, you would see a ring created by the jet (plus disk-to-jet transitioning matter) that is stricken through by the main disk. This corresponds to the right-most column. As you rotate more and more (but not quite) face-on towards the disk, there will still be a component of the plasma that ends up being strongly beamed towards you while the whole image starts looking quite a lot like a pure ring (left-most column). This is the current leading scenario for what EHT saw in M87.

I found this animated GIF to explain this really well:

Given this, it looks like it's just relative location of the black hole to the light sources behind/around it.

Not the answer you're looking for? Browse other questions tagged general-relativity black-holes astronomy event-horizon accretion-disk or ask your own question.

31
Did the new image of black hole confirm the general theory of relativity? (M87)
15
Why don't the black holes appear black in color in images of galaxies taken from HST?