What conductance is measured for the quantum spin Hall state when the Hall conductance vanishes?

It's probably just a definition, but what did König et al. actually measure when he confirmed the existence of surface states in CdTe/HgTe/CdTe quantum wells (see http://arxiv.org/abs/0710.0582)?

"However, because the Hall conductance of the QSH state vanishes, it is clear that the TKNN or Chern number discussed above, which corresponds to the the value of the Hall conductance in units of e2/h, cannot provide a useful classification of the QSH state. This issue has been addressed within both the topological band theory (23) and the topological field theory (23). Accordingly, the proper topological invariant is valued in the Z2 group containing only two elements, 0 or 1, with 1 corresponding to the topologically nontrivial QSH insulator and 0 corresponding to a topologically trivial insulator with no robust gapless edge states."

"Because spin-orbit coupling destroys spin conservation, there is no such thing as a quantized SH conductance in the QSH effect. This is another way to understand why the correct topological invariant for the QSH effect is Z2 and not Z. Finally, the BHZ Hamiltonian predicts a single helical edge state per edge."

Yes, König et al. did indeed measure charge conductance in CdTe/HgTe/CdTe quantum wells. I think your dilemma is a result of mixing up the description of the properties of the quantum spin Hall insulator with and without the existence of external bias. The intuitive picture of counter propagating edge states with opposite spins, that is repeatedly discussed in the literature, is without external bias. Imagine a HgTe 2D layer (in the inverted regime) just sitting there without anyone doing anything to it. Focusing on (say) the top edge, you have (say) $|\mathbf{k},\uparrow\rangle$ propagating to the right (with conductance $e^2/h$) and it's Kramer's partner $|-\mathbf{k},\downarrow\rangle$ propagating the left. In the absence of an external bias the Fermi levels of both states are equal. That is why the charge conductance is $\sigma^{\text{charge}} = e^2/h + (-e^2/h) = 0$ (where the minus sign comes from the fact that the current from the $|-\mathbf{k},\downarrow\rangle$ state is flowing in the opposite direction). However, a spin up current going in one direction (say $+\hat{x}$) and the same magnitude of spin down current going in the other direction ($-\hat{x}$) is equivalent to twice the amount of spin up current in the $+\hat{x}$ direction. That's why you end up with a spin conductance of $2e^2/h$. 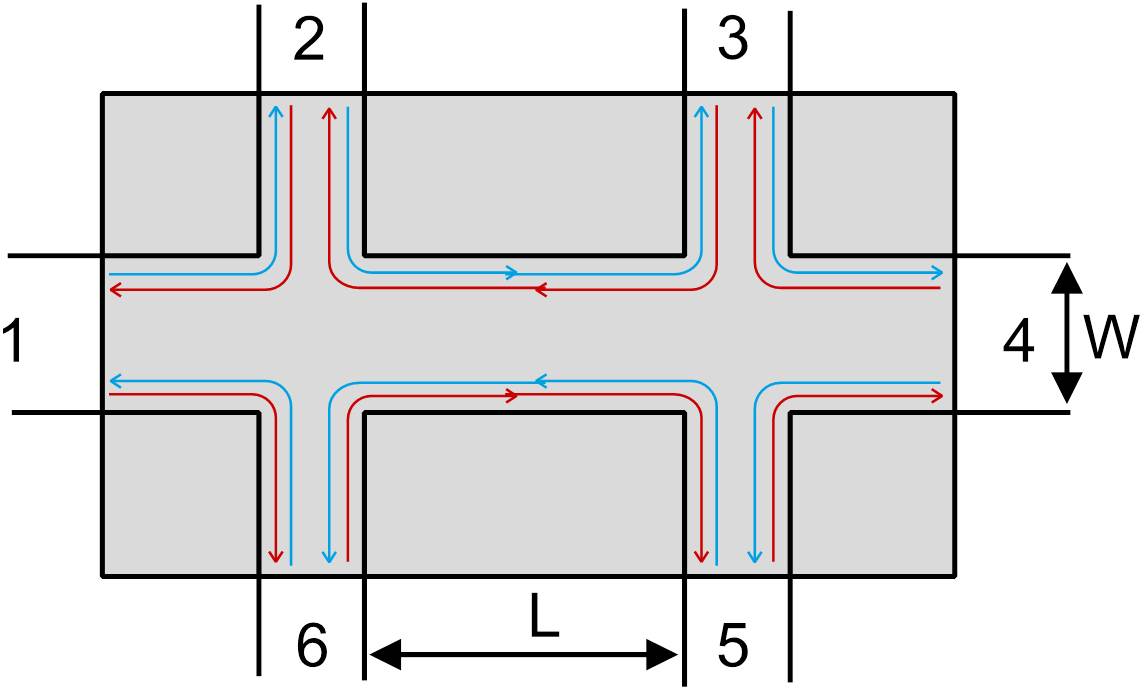 This is exactly what Roth et. al experimentally observed 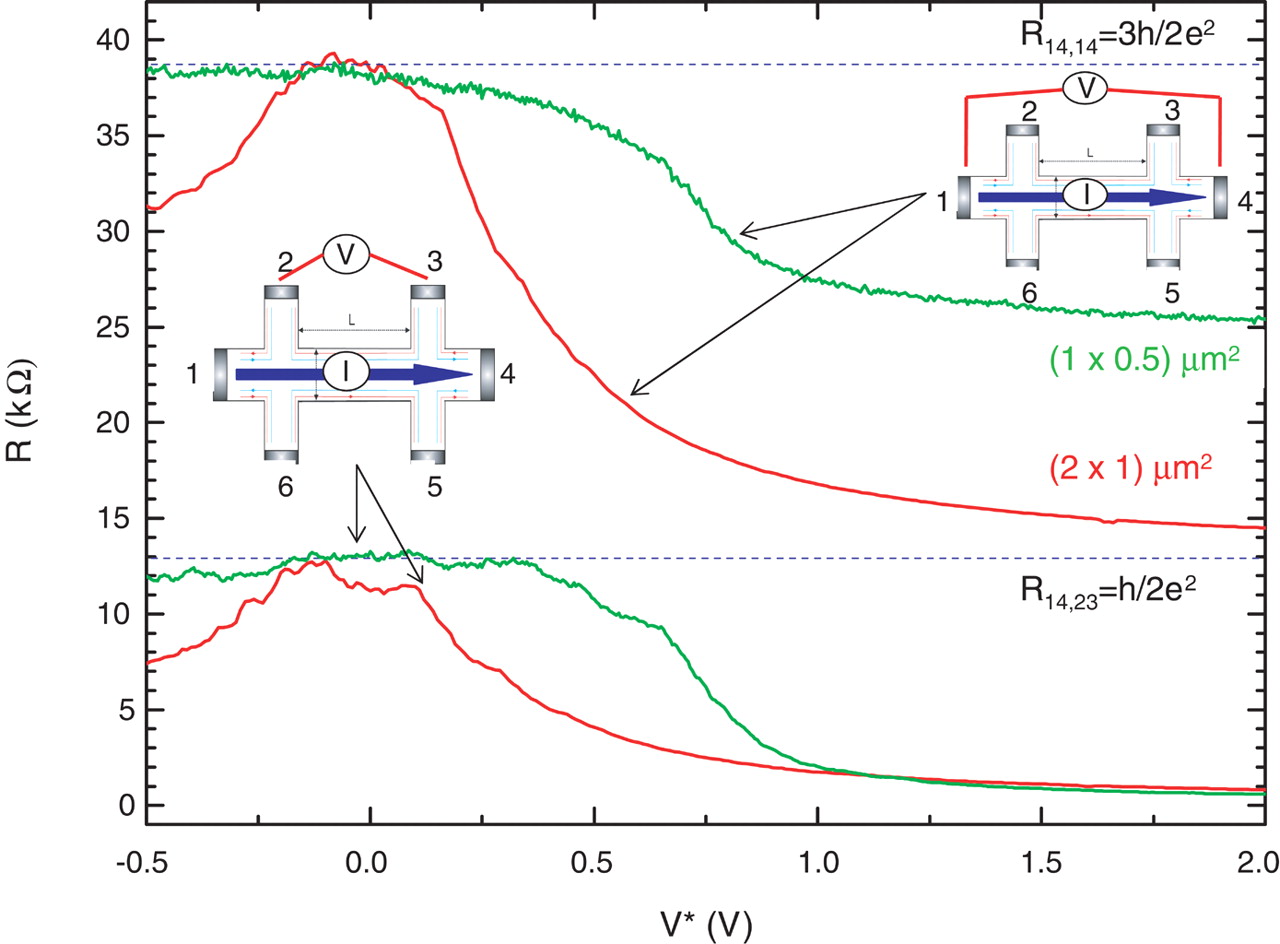 These values of two- and four-terminal resistance were confirmed to be independent of the sample geometry ($L$ and $W$). As a result, you can rule out any type of conduction other than the edge states. Additionally, you expect these values of resistance only if you assume helical and dissipationless edge states. Therefore these measurements should confirm the existence of the quantum spin Hall state in HgTe.

Also: Why is there only a single helical edge state per edge? Why must we have at least one and why can't we have, let's say, two states per edge?

If you had (say) two pairs of counter propagating helical edge states then such a system is not robust to disorder. Such a situation is shown in part (a) (in the absence of disorder) in the figure below. The states belonging to the red and blue bands at the same height (i.e. same energy $E(\mathbf{k},\uparrow)=E(-\mathbf{k},\downarrow)$) form Kramers' partners. The brown shaded regions represent the bulk bands. Since you have two pairs of Kramers' partners, the respective bands will naturally intersect at two points (as shown in part (a)). Any kind of disorder will result in gapping out of the states as shown in part (b). But note that such a gapping out process is permitted by Kramers' theorem. A quick way to see this is: look at the reflection of any band with respect to the vertical ($k=0$) axis. Under such reflections red should transform into blue and vice versa. 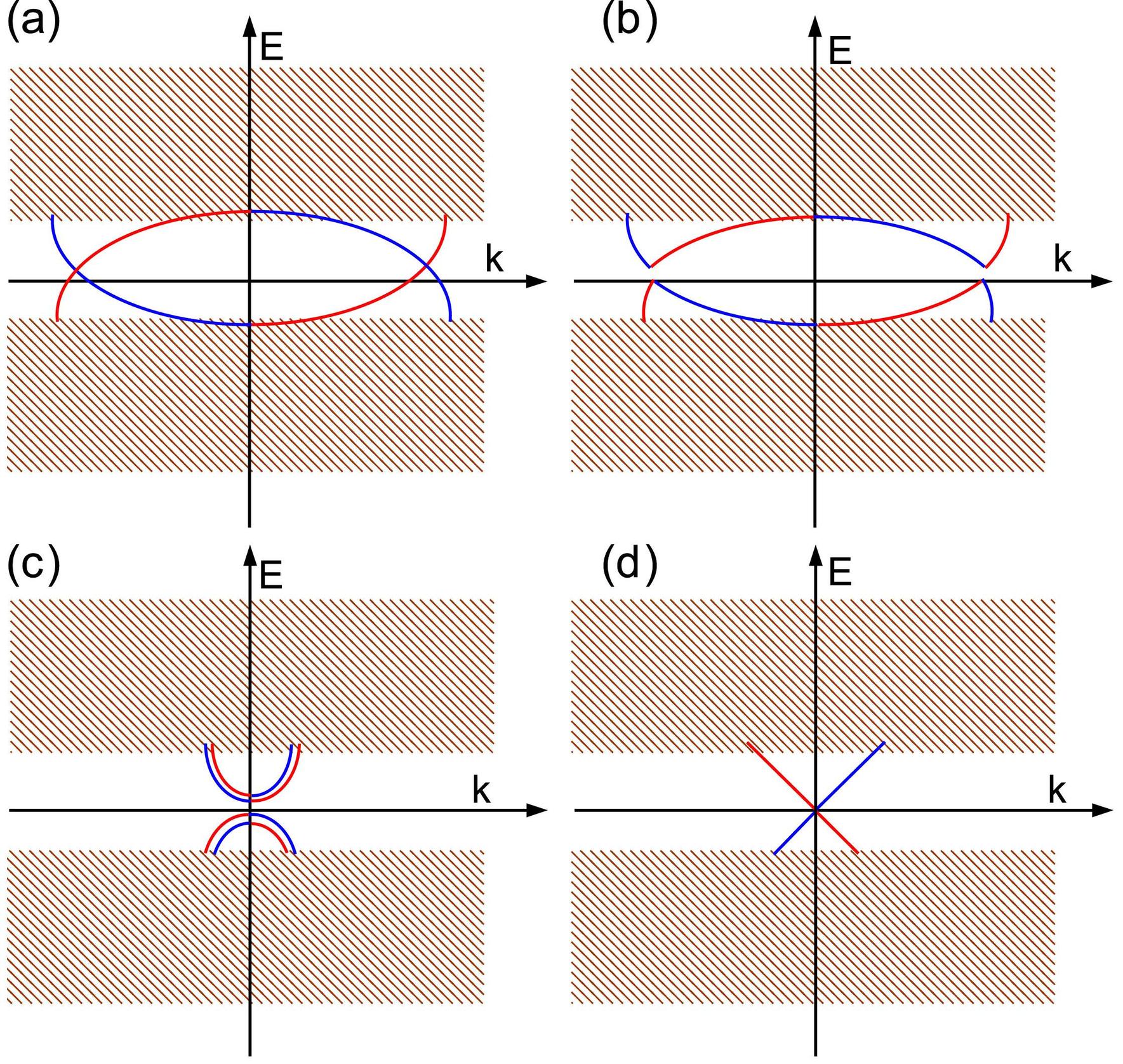 Now, imagine that you had two copies of Dirac-like helical edge states. In other words, two copies of part (d) superimposed on one another. When you gap out the system it will look like part (c). You can observe that in the part (c) time reversal symmetry is still preserved after gapping. In part (d), however, you only have one copy of Kramers' partners. There is only one point of intersection (as opposed to parts (a) and (b)). You can observe that there is no way in which you can open a gap (at $k=0$) while still satisfying time reversal symmetry. More specifically, introducing a gap (in part (d)) will only violate Kramers theorem at the $k=0$ point (i.e. $E(\mathbf{k},\uparrow)$ and $E(-\mathbf{k},\downarrow)$ will not be equal at $k=0$). Hence if the disorder respects time reversal symmetry then such a band intersection is said to be "protected by time reversal symmetry." In realistic systems like the HgTe quantum well, say you had $2n+1$ Kramers' partners. In that case disorder will destroy such Kramers' partners in $n$ pairs such that only one pair is left in the end. The existence of odd number of pairs is guaranteed in a topologically nontrivial phase. In fact, that is how people identify a topologically nontrivial phase.

Because spin-orbit coupling destroys spin conservation, there is no such thing as a quantized SH conductance in the QSH effect. This is another way to understand why the correct topological invariant for the QSH effect is $Z_2$ and not $Z$. Finally, the BHZ Hamiltonian predicts a single helical edge state per edge.

You should read the lines before the above ones. The authors mentioned that spin is not a good quantum number. When you introduce spin orbit coupling the Hamiltonian is diagonal in the total angular momentum basis. The total angular momentum can be defined as $$\hat{\mathbf{J}}=\hat{\mathbf{L}}+\hat{\mathbf{S}}$$ and you can label the eigenstates as $|j,m_j,s\rangle$ where $\hbar j(j+1)$, $\hbar m_j$, and $\hbar s$ are the eigenvalues of $\hat{\mathbf{J}}^2$, $\hat{J}_z$, and $\hat{S}_z$. In the bulk of HgTe $m_j$ is a good quantum number instead of $s$. On the edge, however, even $m_j$ is not conserved in due to lack of rotational symmetry. I think that what the authors are trying to do is emphasize the difference between the quantized spin Hall effect and the quantum spin Hall effect. As I will describe shortly, quantized spin Hall effect is not possible. For example, say you are trying to observe the spin analogue of the integer quantum Hall effect. You pass a longitudinal current in a ferromagnetic material (where spin is conserved) then you would get the same integer steps $\mathbb{Z}$. There will be both spin and charge accumulation in the transverse direction. Heuristically this is sort of like a hybrid between spin and charge Hall effects. This is also known as the quantum anomalous Hall effect. But note that time reversal symmetry is broken in such a system. The moment you introduce time reversal symmetry $\mathbb{Z}$ collapses to $\mathbb{Z}_2$. If you had a pure spin Hall effect, i.e. there is spin but no charge accumulation in the transverse direction, then time-reversal symmetry is preserved. Therefore you will never observe a quantized (or $\mathbb{Z}$) spin Hall effect.

Not the answer you're looking for? Browse other questions tagged condensed-matter or ask your own question.

22
Is there an algebraic approach for the topological boundary (defect) states?
13
Is edge state of topological insulator really robust？

6
Would HgTe be a topological insulator?
8
Quantum Hall Effect and Edge States
4
Topological Insulators: is HgX a special case?
6
Kane and Mele's argument on the existence of edge states in quantum spin Hall effect of graphene
8
Why do edge states in graphene exist between the valence and conduction band?
4
Why one can observe Quantum Hall Effect in 3D Topological Insulators in an external magnetic field when TRS is broken?