A uniform ladder, $AB$, is leaning against a smooth vertical wall on rough horizontal ground at an angle of $70°$ to the horizontal. The ladder has length $8\ \rm m$, and is held in equilibrium by a frictional force of magnitude $60\ \rm N$ acting horizontally at $B$, as shown in the diagram. Write down the magnitude of the normal.

The normal reaction makes both A and B rotate, so I don't understand how we can ignore it by taking the moment at B OR A?

I have 60*8cos20 on the LHS (clockwise) = X*9.8*4sin20 (anti) but then I remember the normal force and it feels like I should add everything from the LHS to the RHS and I don't understand why that's wrong.

If I'm taking the moment at B, the 60N to the left frictional force still makes point -A rotate clockwise. and the Normal force, makes point A rotate anti-clockwise, so I still can't ignore it?

Similarly, there have been other seesaw questions, where I am told if I take the moment at the pivot then I can ignore the reaction at the pivot. Sure, but isn't there still a normal reaction from the seesaw back up into the (particle) weights on top of them?

Please can someone explain the simple thing I must be doing incorrectly, thanks!

In situations like this, it doesn't mean the force no longer matters, it's just saying that a force doesn't have a torque about the point at which it is applied.

You might be confused because you are thinking "if a force causes rotation about some point then it has a torque." But the issue is you have to specify the point you are calculating the torque about first. You can't talk about torques without first specifying the point you are "looking at". In other words, the statement "A force has a torque of $\tau\ \rm{N\cdot m}$" is meaningless.

The forces acting on B without pivot are unable to provide a force that allows the ladder to rotate around point B.

To apply a moment at point B, you need to have both a force, and a moment arm. The forces applied at point B have no moment arm, and therefore cannot contribute to the ladder rotating around that point (or, you could say when you do the math, their moment arm is zero, and therefore the moment they produce is 0).

That does not mean that the forces at point B cannot cause rotation around a different pivot point; just that those forces do not contribute to the pivoting around point B.

I have included the forces which are acting on the ladder in the left-hand diagram. 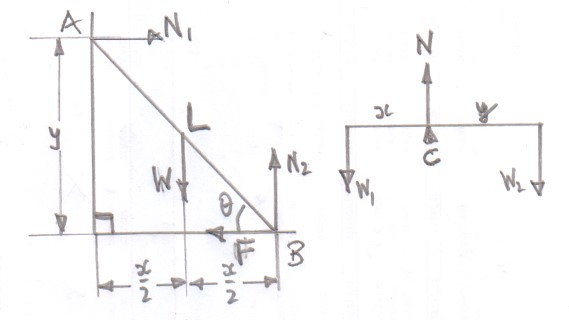 Now look at the torques acting on the ladder in a slightly different way.

The ladder is subjected to two couples $W\,\frac x 2$ anticlockwise and $F\, y$ clockwise which for static equilibrium must be equal in magnitude.

Your seesaw, with $N=W_1+W_2$ as the net force equals zero condition, is subject to two equal magnitude and opposite direction couples, $W_1\,x$ and $W_2\,y$, so that $W_1\, x = W_2\, y$ which is just the equation you might write when taking moments about the pivot $C$?
Again taking moments about any point will yield the same result.

2
Nature of frictional force
0
Frictional forces and their directions
1
Static equilibrium - Ladder against a wall, how far can person ascend
0
Torque and angular acceleration , moments , counterweight
0
Leaning ladder problem
0
If I hold a ladder at an incline to a frictionless surface and then release it, will it slide?