Springs with some finite mass

Let us consider a spring which is having some finite mass. By the help of some external agent the spring has been extended by some distance $x$. Will the restoring force produced in the spring still be directly proportional to the extension just like any massless spring?

In principle, yes. Generally (i.e in problems) springs are indicated as massless because it makes solving easier in particular situations, but Hooke's Law ($F=-kx$) applies nonetheless.

When spring mass becomes non-negligible, such as determining the acceleration of an attached mass or in the case of spring oscillations, then the mass of the spring has to be considered, and the solution requires integrating over the length of the spring.

Obviously as soon as we start taking into account realistic features of a spring we will lose the linear Hook law (the force is directly proportional to the extension), which is a good approximation for small extensions.

That said we can try to see if the presence of a mass alters the kinematics of the system: so let's think of adding a mass density to a classic ideal spring. The conclusion is that when now you extend the spring by applying a force on it, you will have some inertia of the spring which will further oppose a rapid extension.

Let's see how this emerges from a simple model. We can always write its energy like:$$E=K+V$$ where $E$ is the total energy of the system, $K$ its kinetic energy and $V$ its potential energy.

Focusing on the kinetic term, we know that we can write it as an integral over the mass distribution: $$K=\frac{1}{2}\int_0^L dl \;\lambda\; v^2(l,t)$$ where $\lambda$ is the mass density per unit of length ( $l$ ) and $v(l)$ is the speed of each point of the spring (here $l$ follows the length of the spring, so indicates a point on the spring). Basically we have written the standard kinetic term $dK=\frac{1}{2}dm \;v^2$ for every infinitesimal piece of the string of mass $dm$.

Now let's move to the potential. Does the mass influences the potential energy? Let's neglect relativistic effects (which we neglected in the extimate of the new kinetic term and in the massless model to begin with); we could still have gravity: having a non-zero mass, the points of the string attract each other by gravitational interaction. This would favor configurations of the spring in which it is slightly compressed (so that all the points are slightly nearer to each other). However since this computation looks messy and since I assume your spring will not have a planetary mass while conserving the original elastic constant, we will neglect this effect too.

Note that I just said that if the spring was to be very heavy its elastic constant and therefore its potential energy would change. This is due to the fact that elastic energy is generated by electric bounds between molecules (or lattice ions in the case of a metallic spring). If you want a spring as heavy as a planet you will need its section to be hundreds of kilometer thick: therefore you will have a lot more microscopic bounds opposing the (giant)spring's torsion and compression.

This was to say that the potential energy $V$ will remain that of the original massless spring: $V=\frac{1}{2}k \Delta x^2$, where $\Delta x$ is the extension of the spring.

Now in order to understand how the Hook law is changed you should write down the equations of motion. If we add a constant external force $F_{ext}$ to the system it will act as a power source (modifying the energy with a term $+\Delta x\; F_{ext}$).

This means that only in the static limit in which the spring has stopped accelerating the Hook law will be again valid.

The law $F=-kx$ is a very good mathematical approximation of the real springs. But any real spring doesn't obey this law precisely. There are always some differences.

Massless spring is obviously a mathematical abstraction as well. In most circumstances we can treat real springs as massless. But not always, it depends on the problem to be solved.

We can use yet another mathematical abstraction: "ideal spring with mass". But we can't require that it always obeys the law $F=-kx$, because it would be not a spring but something weird.

Imagine that we have extended the spring and let it go. Even our mathematically ideal spring can't instantly get to it's original length parts of the spring have mass and can't move very fast. So there will be a period of time when the spring is still extended, but there is no force applied to it.

However this mathematical abstraction can obey the law $F=-kx$ when there are no movements in the system.

Hooke's law differs from other physical laws in an important respect:

Hooke's law is not a fundamental law - this should be obvious when you consider that a spring is not a naturally occurring object, but a manufactured piece of engineering.

It is possible to buy springs which do not obey Hooke's law, which are manufactured for specific purposes. In this respect Hooke's law is more akin to an engineering specification than a physical law, though for the purposes of teaching physics it is treated as one.

So in truth the answer to "will a spring obey Hooke's law under some specific conditions", is that you should consult the manufacturer's data sheet. This will give information such as the maximum extension before the spring is permanently deformed and so on.

For a spring that suffers a uniform stretching (i.e., without acceleration), the force-elongation equation is $$F=ku_L$$ where u is the displacement of the end of the spring at x = L relative to its undeformed length of L. This equation can also be expressed in the form $$F=kL\frac{u_L}{L}$$

For a spring that suffers a non-uniform stretching (such as is present with acceleration), the corresponding relationship is $$F=kL\frac{\partial u}{\partial x}$$ where u = u(x) is the displacement of the spring cross section that was at axial position x in the undeformed configuration of the spring.

Real springs have several properties that are not modeled by Hooke's linear law. You can find comparisons pretty easily. Experiments with springs might be one of the easiest to perform at home: 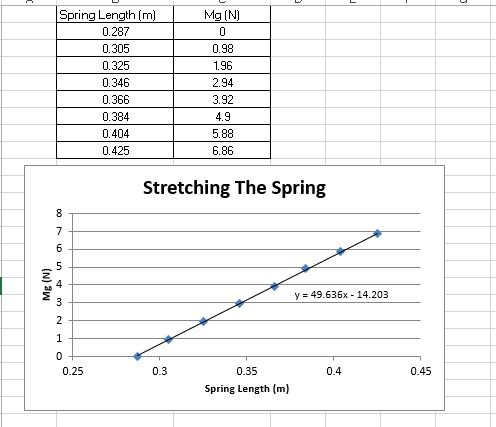 I don't see any experimental data on evaluating effect of spring's mass on force produced, probably because in most experiments mass of the spring is much smaller than the force applied to the spring to deform it. After all, mass of spring is linked with its spring constant k. Thicker wire of a spring will increase its mass, but also will increase spring constant, i.e. it will require more force to deform it to the same length

Not the answer you're looking for? Browse other questions tagged newtonian-mechanics mass spring oscillators elasticity or ask your own question.

4
Why the work done by system not stored as potential energy?

2
Is mass proportional to the displacement from equilibrium in Hooke's law?
0
Can Hooke's law go along with Newton's 3rd law & how is momentum conserved in case of spring?
1
On the definition of elastic restoring force in a spring
3
Why does different part of a spring having mass expand proportional to their distance while the spring has some mass hanged in the bottom?
0
Extension in Massive Springs under gravity