Object on a banked curve

If an object is to move on a frictionless banked curve without skidding outwards or inwards, the object is provided centripetal force to maintain it in a circular track by the component of the normal by the surface on the object directed radially inwards. There’ll be one possible speed it can move at in the circular track. If it moves at a speed greater than that, it’ll skid outwards and if it moves at a lesser speed, it’ll skid inwards.

I think if it moves at a greater speed than the value which is feasible in accordance with the value of the centripetal force then the normal won’t be able to provide enough force to overcome the object’s inertia and that is why it’ll skid outwards. Is this correct?

Why will the object skid inwards if it moves at a speed less than the only possible value it can have?

First, let's look at the typical analysis of what you discuss for obtaining the "one possible speed" to move around the banked curve on a circle of constant radius. It might help to imagine the banked curve, or incline, as a cone the object moves around. For the variables, $m$ is the mass of the object, $g$ is the acceleration due to gravity, $r$ is the distance the object is from the center of the circle (i.e. the horizontal distance from the bottom of the incline), $\theta$ is the angle the incline makes with the horizontal, and $\phi$ is the angular displacement of the object, where $\phi=0$ can be arbitrarily chosen due to the symmetry of the problem.

We have in the vertical direction the forces $N\cos\theta$ and $-mg$. Since we want our object to not move up or down the incline it must be that these forces are equal. i.e. $$N=\frac{mg}{\cos\theta}$$

And then in the horizontal direction we have our centripetal acceleration, so that $$\frac{mv^2}{r}=N\sin\theta$$

However for what will come later it will be easier to use the angular speed $\omega$ which is the time rate of change of the angular displacement $\phi$. In this special case where we aren't moving up or down the incline, $v=\omega r$ Therefore $$mr\omega^2=N\sin\theta$$

Notice that we can't just talk about a "single speed" without also specifying the radius we want our circle to have.

Another way to look at this that is better for the following discussion is that there is an equilibrium radius for a given equilibrium angular speed: $$r_{eq}=\frac g{\omega_{eq}^2}\tan\theta$$

Now let's think about the more general case. This gets drastically more complicated, and it is better to use something like Lagrangian mechanics to determine how the system behaves, since Lagrangian mechanics does not require us to know how the normal force behaves in general. This all involves calculus, but I will try to do my best to explain what the calculus means for those who are not as familiar with calculus.

The motion of the object is given by the following coupled differential equations$^*$, where a dot represents the time derivative (time rate of change) of that variable: $$m\ddot r\sec^2\theta-\frac{L^2}{mr^3}+mg\tan\theta=0$$ $$\dot\phi=\frac{L}{mr^2}$$ where $L=mr^2\dot\phi=mr^2\omega$ is the angular momentum of the object that is constant and depends on the initial conditions. You can check that at equilibrium in $r$ (i.e. $\ddot r=0$) we get the expression for $r_{eq}$ we obtained above in terms of $L$: $$r_{eq}=\left(\frac{L^2}{m^2g\tan\theta}\right)^{1/3}$$ Now, if we solve this equation with initial conditions right at equilibrium we get a constant $r$ and a constant $\dot\phi=\omega$.

So everything checks out so far. Now to the crux of the question. Let's say we are at equilibrium in uniform circular motion and then we suddenly decrease our angular speed (i.e. decreasing $L$). What is going to happen? Well, the object will want to move towards the new equilibrium position given by our expression for $r_{eq}$. However, this does not mean it will settle down to this new equilibrium. We can see this by just solving the differential equations with the same parameters as before but lowering the value of $L$ to $0.5$ for example:

The red line shows the new equilibrium radius and angular speed on each corresponding graph. What we see is that the object does always try to get to equilibrium, but analogous to a mass oscillating on a spring it always overshoots this equilibrium value.

Now you also ask about the normal force. We can actually obtain a general expression for the normal force and its components by first rewriting our differential equation for $r$ (algebra left out): $$m\ddot r-mr\dot\phi^2=-mr\dot\phi^2\sin^2\theta-mg\sin\theta\cos\theta$$

and then compare this to the radial component of forces in Newton's second law in polar coordinates: $$F_r=m\ddot r-mr\dot\phi^2$$ 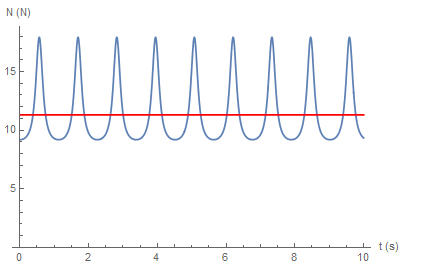 Of course motion along a cone would probably be better described using spherical coordinates, but I wanted to stay with the original analysis of the OP where we consider the radius of the "circle" rather than the distance we are along the incline.

5
What if the net force provided for a circular motion is larger than the required centripetal force?
2
Misunderstanding normal force?
0
Why Normal force is not adjusted if we increase or decrease the speed of car on frictionless banked road?
0
Shape of the orbit in tethered ball?
0
Banked Corners and Centripetal Forces Question
0
What would be the result of a body decreasing safe speed in a banked circular arch?

0
Banked Curve with friction
0
How to predict direction of force of friction on car in banked roads?
0
Conceptual Background for Banked Turn Problems?
0
How to nullify effect of Centrifugal force/centripetal force
0
What causes an object to move up a frictionless banked road?
0
What will happen when the velocity of the car is greater than the rated speed at a banked turn?
0
Why Normal force is not adjusted if we increase or decrease the speed of car on frictionless banked road?