Electric field inside a cavity

What is the electric field in the cavity, if the conductor having the cavity is charged? Does the result depend on the shape and size of the cavity or conductor?

Could somebody give me a detailed answer and if possible prove it mathematically, too?

To get a feel for this I will first introduce Earnshaw's theorem. Earnshaw's theorem states that, given a collection of static charges, it is impossible to trap another charge. As an example consider the following setup: 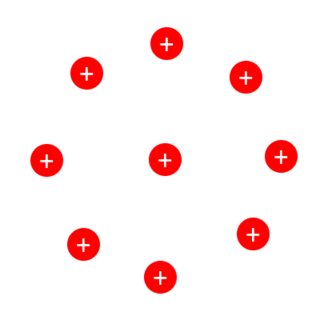 Here I try to trap the middle charge by arranging 8 fixed charges in a circle. At first glance this seems like a stable configuration right? Earnshaw's theorem tells us this is unstable: even the slightest nudge to the middle particle will make it escape towards infinity. So we conclude that by themselves, charges can't form a stable configuration. This is a bit handwavy but from that you can conclude that all the charge must reside on the boundary conductor, because the boundary stops the charges from escaping to infinity.

We can then plug in the electric potential (there are no magnetic fields so we are allowed to define a potential) to get the following:

This last equation is called the Laplace equation and it has many nice properties. One of them is that solutions can't have a maximum or a minimum in it's domain, so maxima and minima have to be located on the boundary. We can argue that the potential along the boundary has to be constant: the charges can't be inside the conductor but they can still move along the boundary. If the potential is not constant the charges will rearrange themselves until minimal energy is found. Let's call this potential $V_0$. Since the inside of the conductor can't be higher or lower than the boundary the entire inside must be equal to this constant potential. A constant potential means zero electric field: $$\vec E_{inside}=-\nabla V_0=0$$

Sorry if this answer is a bit handwavy/messy but for a thorough answer you would need an entire course in electrostatics.

If the conductor is charged, then it only occured because of some external electric field. That is what causes charges in the conductor and on the surface to rearrange in such a way that no charge resides inside, but only on the surface. The field inside is a result of two sources. One due to the external field and the other due to the resulting charged conductor. This net field inside will be zero as the contribution from the two fields will cancel each other out.