Diffraction of White light: Why is violet on the inside

When white light is passed through a diffraction grating, an interference pattern is observed. The center will be white as the path length is equidistant however the edges will be rainbows. What I don't understand is why should violet light be on the inner edge and red light be on the outer edge. I understand that violet light has a shorter wavelength compared to red light so it should diffract less in comparison to red.

What I'm not sure about is how the "strength" of diffraction (how much the wave is diffracted) will impact on the spacing of the patterns. However, it kind of feels intutive that a weaker diffraction should produce a interference pattern that is FURTHER from center (ie opposite of reality) 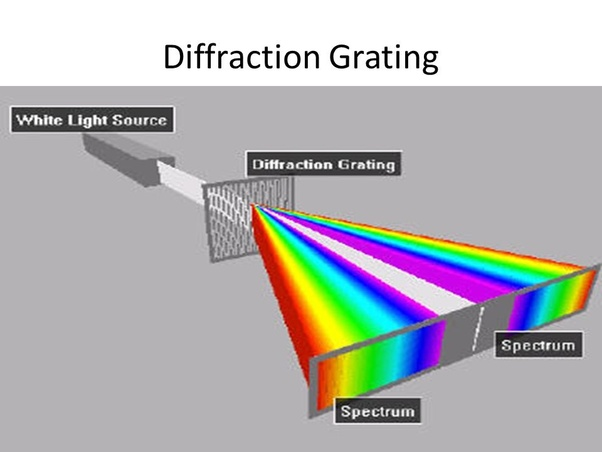 If you look at the formula for the diffraction peaks of a single wavelength $$ d \sin(\theta) =m \lambda$$ where $d$ is the spacing of the grooves in the grating, $\theta$ is the angle off the center, $\lambda$ is the wavelength and $m$ is the order of the peak, it is quite obvious. Gratings have diffraction peaks for certain wavelengths whenever the optical difference between neighboring slits in the grating is a full wavelength, so constructive interference appears. Smaller wavelengths require a smaller path difference, and thus a smaller angle $\theta$, for constructive interference.

However, it kind of feels intutive that a weaker diffraction should produce a interference pattern that is FURTHER from center (ie opposite of reality)

Not the answer you're looking for? Browse other questions tagged waves diffraction or ask your own question.