What happens energy-wise if you put a gyroscope at the north pole?

I had an idea for energy generation: put a gyroscope at the north or south pole connected to a dynamo or similar. The idea was that when the gyroscope resists the Earth's rotation, it would drive the dynamo to create electricity. (The gyroscope's axis of rotation would be perpendicular to the Earth's, of course.) The source of the energy would be the Earth's angular momentum.

So, what exactly does happen? It is apparent that the machine can at least temporarily steal some energy from the Earth, so how does it give it back, so to speak?

EDIT: The gyroscope is not on a gimbal. It's axis can only rotate in the direction of the Earth's rotation, and only by turning the dynamo.

If I understand you correctly:
You describe a gyroscope wheel with the spin axis perpendicular to the Earth's axis, mounted in such a way that there is no freedom to pitch, but the swivel axis is connected to electric generators. 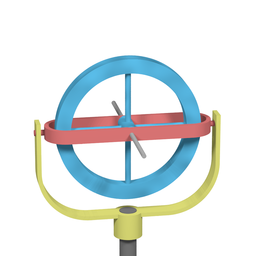 As I understand your description:
A setup where there is no possibility of pitching motion. Compared to the setup in the image: regard the red frame and the yellow frame as a single solid unit, a perfectly rigid structure.

For comparison let me first describe what would happen if the setup does allow pitching motion but with brakes that you can quickly release.

You spin up the gyroscope wheel, initially using the brakes to prevent pitching motion. As the gyroscope wheel spins up the combination of the spinning and the co-rotating with the Earth along the swivel axis gives a tendency to pitch. Since the Earth's rotation is so slow that pitching tendency is very small, but with a sufficiently high spin rate you can eventually achieve a significant tendency to pitch.

Now the case with no freedom for pitching motion:
As you spin up nothing will happen.
Prior to spinning up the swiveling motion of the gyroscope was co-rotating with the Earth's roatation, and all the way while spinning up the swiveling motion will remain co-rotating with the Earth's rotation. Because of the tendency to pitch stress in the supporting structure will mount, proportional to the spin rate. But this setup is described as perfectly rigid, so it can entirely prevent pitching motion.

I think I need to clarify my answer.
The key factor in gyroscopic effects is motion.

When you have a spinning motion, and you add another rotational motion, along a different axis, then in response the wheel will move along a third axis.

But then that third rotational motion has its own effect, and it's easy to misinterpret that.

So take the case depicted in the image. You spin up the wheel, and then you put your fingers on the outer frame to try and swivel the gyroscope wheel. In response the wheel pitches, and that pitching motion results in a tendency that opposes your attempt to make the wheel swivel.

So it feels as if your attempt to make the wheel swivel is opposed by the spinning wheel just like that. If the spin rate is very high a very slow pitching rate is sufficient to give a palpable opposition to the attempt to sustain swivel. It's easy to think of the pitching motion as insignificant, but it very much isn't.

It is difficult to suppress pitching motion altogether, the usual mountings aren't set up for that. Those are factors that contribute to misinterpretation of how a spinning gyroscope wheel responds to being nudged.

Let's say that the gyroscope is started spinning at the pole, with its axis perpendicular to the axis of the Earth, and the gyro is on a gimbal mount that allows the gyro to tilt freely. As the Earth turns, the gyro experiences a torque that rotates the gyro's axis toward alignment with the axis of the Earth. The closer the alignment, the less torque. So what happens is that the gyro aligns its axis parallel to the Earth's axis, and then just stays aligned.

There is a lot to be found on the internet about this idea, including this patent, this, and this.

Not the answer you're looking for? Browse other questions tagged newtonian-mechanics energy angular-momentum conservation-laws gyroscopes or ask your own question.

2
Is gravitation really a conservative force?
3
Measuring Earth rotation rate about its axis with gyroscopes
0
Can/Does angular momentum apply a torque?
2
Why does the direction of a Foucault pendulum change if its axis is not parallel to the rotation axis of the Earth?
4
Confusion about what happens when the rotating axis of a gyroscope is rotated
3
Which way does a symmetric top precess and why?
2
Calculate total angular momentum of object rotating about 2 axis (e.g. Earth)
0
Centripetal force in a gyroscope