To measure distance of astronomical objects, often we may use parallax, the angle it makes with the earth-sun and trigonometry to determine the distance. 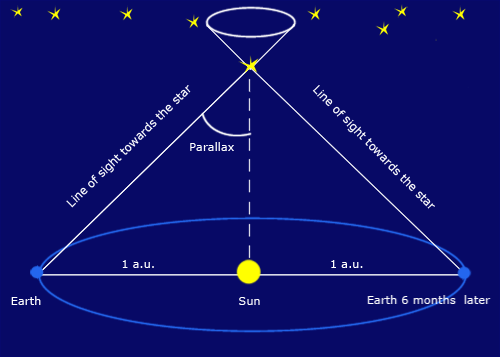 The thing I don't get is why do we need to sweep out at least half a circle and then look at the angular difference. Why can't we just measure the angle at the maximum point of parallax? It seems better than having to half a year just measure the same angle twice. So why is it that we wait 6 months to take 2 readings?

As you know that Parallax angles of less than 0.01 arc sec are very difficult to measure from Earth because of the effects of the Earth's atmosphere.

The answer is that you don't, you would normally have to observe for longer. The reason for that is that parallax motion has to be disentangled from the proper motion of the star (that motion associated with its tangential velocity component with respect to our solar system).

Observing for less than 6 months would reveal motion on the sky that was almost indistinguishable from proper motion, given the small amplitudes of both these effects compared with the precision at which the positions of stars can be measured.

A picture says a thousand words. Here is the track on the sky of a nearest star (Proxima Centauri) which has a very large parallax motion (nearly an arcsecond), but also a large proper motion. The green line shows the path of the star as mapped out by a series of Hubble Space Telescope images. The upticks in the green curve, separated by 1 year, are the motion due to parallax, while the roughly horizontal drift is due to proper motion. So you have to imagine observing this curve for less than half the distance between the upticks and trying to accurately model these data with the sum of these two effects. It wouldn't be impossible for data of this quality and for a star where these motions are relatively large, but becomes increasingly untenable for more distant objects where the parallaxes and proper motions are smaller. 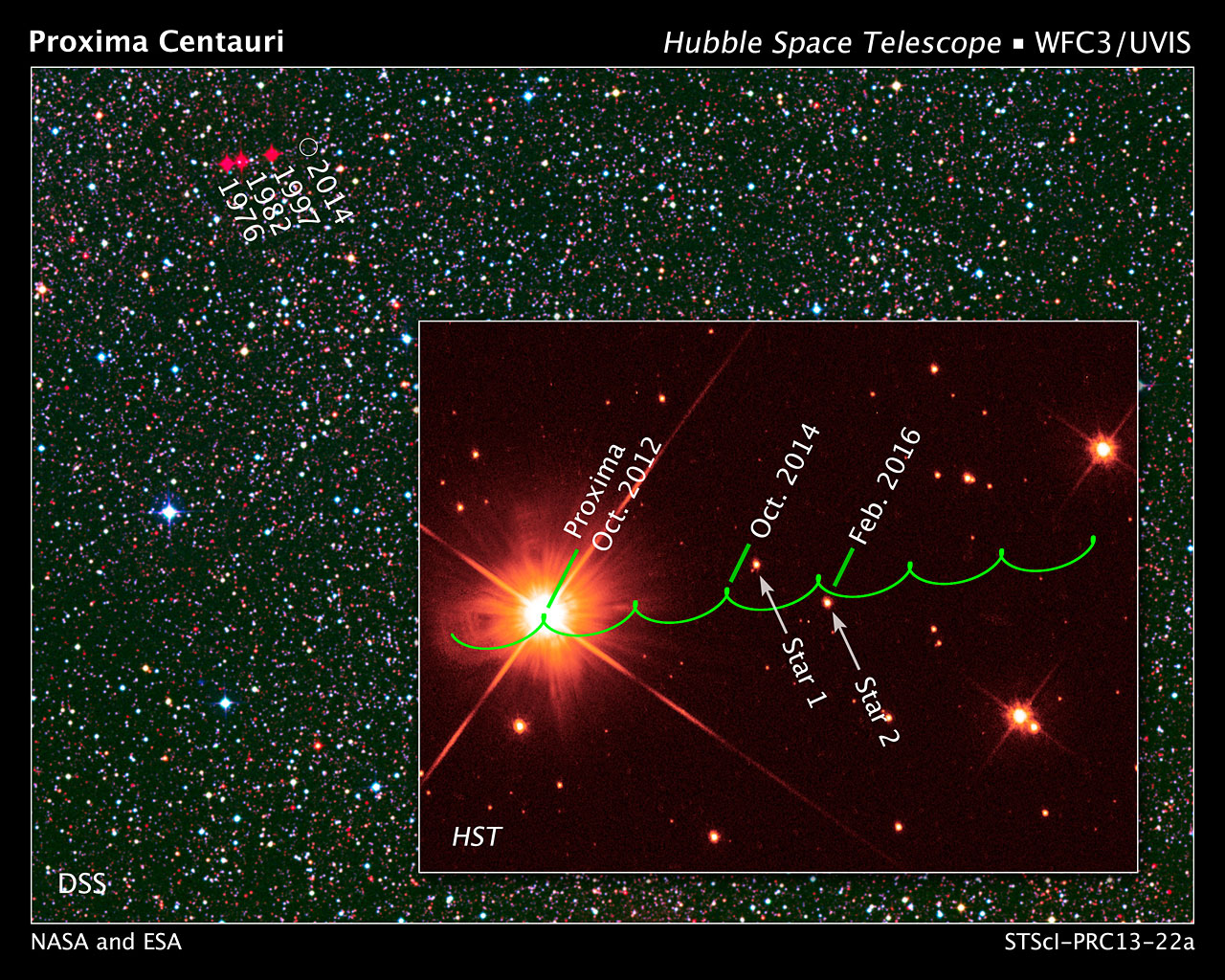 The larger the base ($BC$ vs. $EF$), the smaller angles of the rays from the base, the greater angle between rays (closer to the right angle), and - consequently - the more precise measuring.

Compare: Can you tell, where is the intersection of the blue rays?

Both pairs of rays have their intersection points in the same level (hight). But the red rays ($h$ and $i$) allow us to determine the point of intersection more accurate.

Astronomical distances are large. So, a 'one parsec' distant object has one second of parallax for a full Earth-orbit displacement. That's the equivalent of 5 parts per million of a radian, about the same angle as a dime seen face-on at a distance of a mile.

It isn't easy to accurately measure those small angles, so any result that one can get at one week, is less accurate than (and will be superseded by) a half-year observation.

Not the answer you're looking for? Browse other questions tagged astrophysics astronomy parallax or ask your own question.

14
What accounts for the discrepancies in my calculations of year lengths?
8
Parallax, obliquity, precession, and Orion?
3
Tycho's stellar parallax measurements
3
Do we actually measure distances in light years?
3
Why can we not measure the distance to the Sun directly using Radar?
1
How to use parallax and Cepheids together to measure distances?
1
Parallax versus Redshift when measuring astronomical distances?
3
Why do all the planets and stars in our solar system have such similar average densities?
0
Calculating the Earth-Sun distance
1
How to find the transverse component of a stars velocity given it's proper motion and distance from the observation point?