Amplitude of an electromagnetic wave containing a single photon

Ask Question
Asked 8 years, 1 month ago
Active today
Viewed 19k times
41
$\begingroup$
This bounty has ended. Answers to this question are eligible for a +50 reputation bounty. Bounty grace period ends in 2 hours. Steven Sagona is looking for a more detailed answer to this question:

Single photon sources are an active part of quantum communication research. These photons freely propagate in fiber or free space. It is completely reasonable to ask what the electric field value of such a state is, yet the main answer only discusses the energy (not even amplitude) of such a state. Why such an answer has 29 upvotes (and is the accepted answer) is a mystery to me, it doesn't even answer the question. This question has 20k views, and is used obviously by a lot of people for their information so it should be updated with what actually the electric field of a photon is.

Given a light pulse in vacuum containing a single photon with an energy $E=h\nu$, what is the peak value of the electric / magnetic field?

The electric and magnetic fields of a single photon in a box are in fact very important and interesting. If you fix the size of the box, then yes, you can define the peak magnetic or electric field value. It's a concept that comes up in cavity QED, and was important to Serge Haroche's Nobel Prize this year (along with a number of other researchers). In that experiment, his group measured the electric field of single and a few photons trapped in a cavity. It's a very popular field right now.

However, to have a well defined energy, you need to specify a volume. In a laser, you find an electric field for a flux of photons (n photons per unit time), but if you confine the photon to a box you get an electric field per photon. I'll show you the second calculations because it's more interesting.

There is an extra factor of $1/2$ because, typically, we're considering a standing wave. Also, I've set the magnetic and electric contributions to be equal, as should be true for light in vacuum. An interesting and related problem is the effect of a single photon on a single atom contained in the box, where the energy of the atom is $U = -\vec d \cdot \vec E$. If this sounds interesting, look up strong coupling regime, vacuum Rabi splitting, or cavity quantum electrodynamics. Incidentally, the electric field fluctuations of photons (or lack thereof!) in vacuum are responsible for the Lamb shift, a small but measureable shift in energies of the hydrogen atom.

This is a reasonable question to ask, but the answer is probably not what you're expecting: the electric and magnetic fields don't have well-defined values in a state with a fixed number of photons. The electric and magnetic field operators do not commute with the number operator which counts photons. (They can't, because they are components of the exterior derivative of the field potential operator, which creates/annihilates photons.) The lack of commutativity implies via Heisenberg's uncertainty principle that the field might have arbitrarily large values.

@charles Fransis correctly points out that the expected value of the electric field is zero. (that is, $\langle 1|E|1 \rangle = 0$)

The electric and magnetic field operators do not commute with the number operator which counts photons. (They can't, because they are components of the exterior derivative of the field potential operator, which creates/annihilates photons.) The lack of commutativity implies via Heisenberg's uncertainty principle that the field might have arbitrarily large values.

So yes, we know that since the photon number operator doesn't commute with the E-field operator, so we know the E is uncertain. But realistically speaking, can a really photon have any arbitrarily high E-field amplitude? It could in the same sense that a bounded electron might appear on the moon because it's wavefunction has some tiny component.

Putting things more precisely: what is the probability distribution associated with measuring a particular E-field amplitude for a single photon (that is what is $|\langle E|1\rangle|^2 = |\psi_1(E)|^2$).

The answer is that a photon has a very unique probability distribution that looks like this: 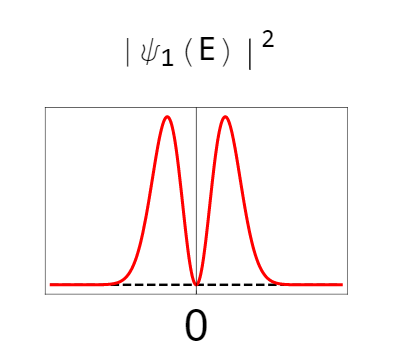 Which, for comparison to if there was only vacuum: 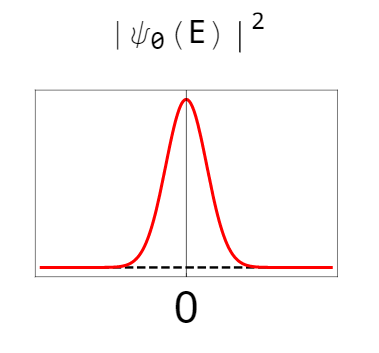 This is a very commonly measured feature of single photons (check out this paper for a classic take on it, and this for something more modern), and this probability distribution (when measuring a photon's electric field) is often used to identify if the quantum state of light is (or isn't) a "pure" single photon.

To see this more clearly, a coherent state, when looking at the statistics as the "phase" of the light changes, it would look like this: 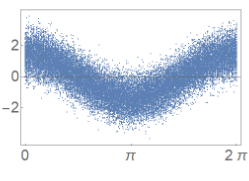 (which is basically $\cos(\omega t)$ with gaussian noise). By comparison a single photon state looks like this: 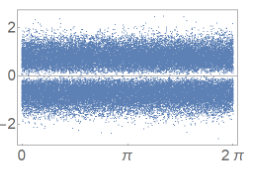 And here we see that changing a "phase" doesn't do anything to a "single photon" (which may have to do with single photons not having a well defined phase.)

Here's an example in the linked experiment: 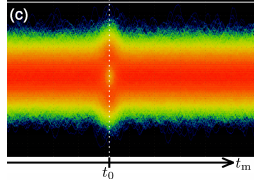 (in this case the x-axis is TIME, not phase!) Pulses with a specific time delay are sent into a homodyne detector (which measures the E-field). Here you can see that for a specific temporal value associated with when the photon hits the detector (repeated for multiple measurements). The value of the electric field has a new distribution, and you see the dip at zero.

Share
Improve this answer
edited 3 hours ago
answered Jan 16 at 20:23

The electromagnetic field can be understood as the expectation $\langle A(x) \rangle$ of the photon field operator, $A(x)$, which annihilates or creates a photon in an interaction with an electron (or other charged particle), provided of course that a charged particle is present for the interaction to take place. For a single photon state $|\phi \rangle$ the action of $A$ will be to annihilate the photon, or create another one, meaning that the resulting state is a superposition of states with two or no photons. The inner product with a one photon state is zero and you necessarily have $$ \langle A(x) \rangle = \langle \phi | A(x) |\phi \rangle = 0. $$

The electric and magnetic field operators do not commute with the number operator which counts photons.

In other words, for a state with a definite number of photons, it is not meaningful to talk of the classical electric or magnetic field, or of a classical electromagnetic wave.

A single photon's wave could have different shapes, really, so the maximum of the Electric field would be impossible to compute given the parameters above. It could be really short with a very high electric field or really long with a low electric field. Or, whatever. That light comes in "chunks" as photons doesn't restrict you.

Suppose the energy of an ocean wave were hv... then how high is it? Well, it would depend on the width and other factors... as surf comes in waves so does light come in photons, but we wouldn't know the exact shape from the question.

If an atom emits energy hf, it emits also an angular momentum (spin). That combination is called "photon" or "wave packet". Linking the appropriate formulas from QM and E&M waves, you get the diameter of the wave packet (about λ/2) but not the length. The radius and the direction of propagation do not change as long as the wave packet is not disturbed. It is not locked in a box but propagates in vacuum.

If the coherence length L is accepted as the length of the cylindrical wave packet, you can calculate the energy density u~f³/L and the electric field strength E~sqrt(f³/L), which is constant inside the cylinder.

If you choose a different shape, perhaps like a cigar, those values differ

By defining the volume of the box, i.e. by setting a volume arbitrarily, one is in effect setting an arbitrary upper limit on wavelength. But a single photon cannot yield a value for wavelength, since there is no possibility of measuring a peak-to-peak distance between adjacent peaks in the waveform, when there is no second peak to measure to.

Energy is a derivative of amplitude, but only in a statistical sense, as an average of many photons per second, since the uncertainty principle makes measuring a single photon problematic. Its electric and magnetic field values are only a statistical average; individual photons may deviate widely from that average. Equations derived from these group averages are likewise valid only for the group, not for individual photons.

Not the answer you're looking for? Browse other questions tagged quantum-mechanics energy electromagnetic-radiation waves photons or ask your own question.

5
Producing photons with same frequency, different amplitude wave
2
Would passing horizontally polarized light through a varying width vertical slit allow you to measure the positional (x) amplitude of light?
4
Photon energy depends on frequency (and/or amplitude)?
4
Where is the amplitude of electromagnetic waves in the equation of energy of e/m waves?
56
What equation describes the wavefunction of a single photon?
26
Born rule for photons: it works, but it shouldn't?
15
Relation between radio waves and photons generated by a classical current
7
Does a photon have an amplitude?
4
Energy of an EM wave compared to energy of a photon
2
Uncertainty-principle and the Maxwell formalism of electromagnetic waves
See more linked questions