However, I know that my conclusion is wrong. Can you point out where I went astray?

Edit: I am trying to make the situation I am referring to clearer. 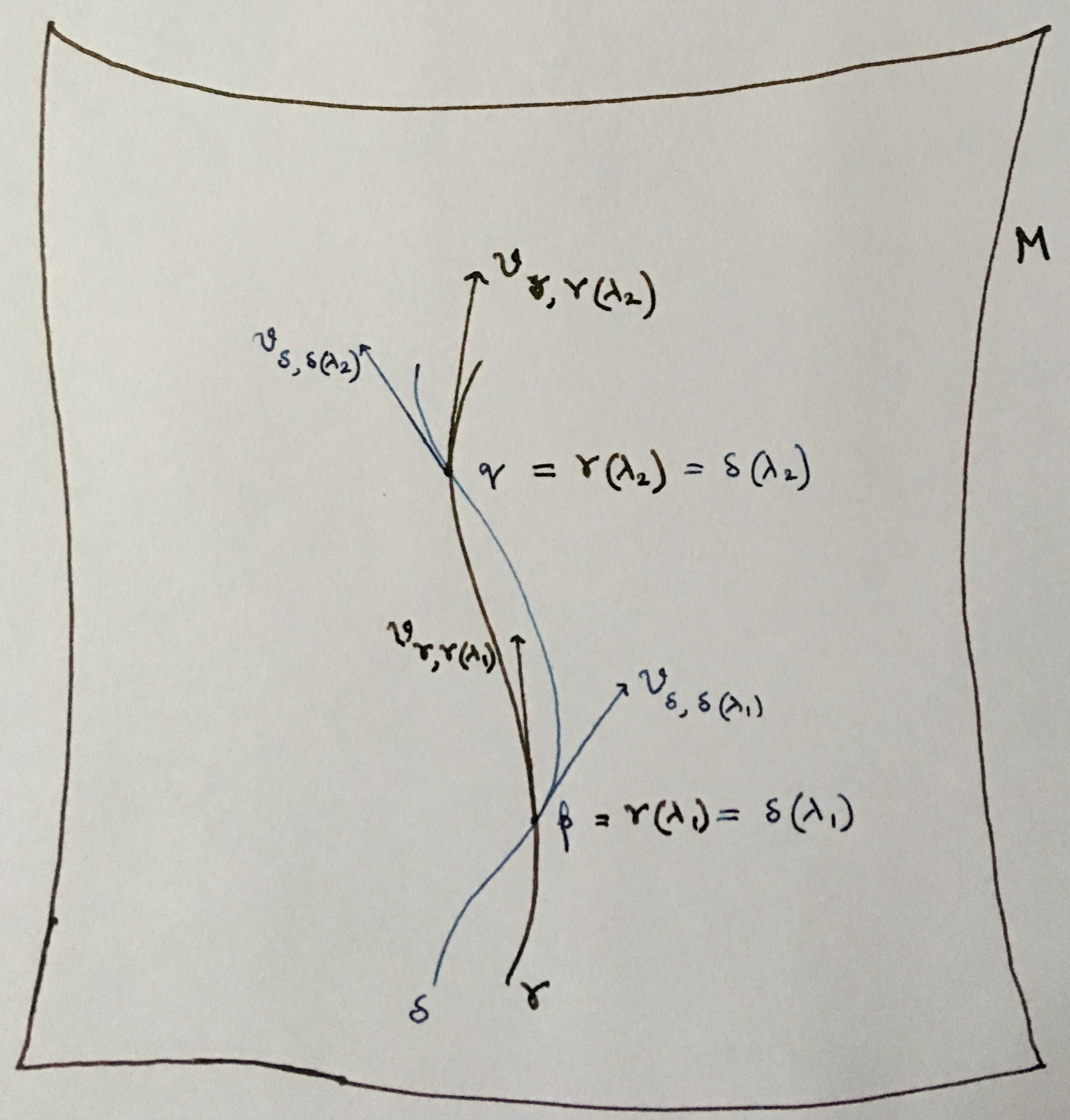 (Sorry for this huge picture. I wanted to make it smaller, but couldn't figure out how to go about it.) This picture shows the two observers $\gamma$ and $\delta$ defined above. Both worldlines are parameterised by the same parameter $\lambda$. This need not be the case but I choose it to convey my point. I wish to determine the proper time measured by observers $\gamma$ and $\delta$ between events $p$ and $q$ in the spacetime manifold $M$. \begin{align} p =& \ \gamma(\lambda_1) = \delta(\lambda_1) \\ q =& \ \gamma(\lambda_2) = \delta(\lambda2) \end{align} This scenario is possible, isn't it? I do not see why $\tau_\gamma$ and $\tau_\delta$ need to be the same. (In fact, in the twin paradox, for example, we see this explicitly.) However, from equation (1) and the deduction above, it follows that $\tau_\gamma = \tau_\delta$. This is my confusion.

Note From the definition of an observer in general relativity, the observer worldline seems to be always parameterised by its propertime. But the propertime measured by two observers between the same two events need not be the same, isn't it?

As concerns your edit:

Perhaps you should consider a concrete example. Choose a space-time such as Minkowski and two randomly chosen curves $\gamma, \delta$ on it that have an arbitrary parametrization $\gamma(\tilde{\lambda}_\gamma), \delta(\tilde{\lambda}_\delta)$ and that meet at some events $p,q$. Now find the proper-time parametrisation $\lambda$ along the entire curves $g(v_{\gamma,\gamma(\lambda)},v_{\gamma,\gamma(\lambda)}) = g(v_{\delta,\delta(\lambda)},v_{\delta,\delta(\lambda)}) = 1$, this can be recast as two first-order differential equations for the functions $\lambda(\tilde{\lambda}_{\gamma,\delta})$. Each of the two differential equations have a unique solution up to a single integration constant. By setting $p = \gamma(\lambda_1) = \delta(\lambda_1)$, you specify both of these integration constants. So, you do not have any freedom to set the same condition for $\lambda_2$ at $q$ because there is no freedom in the solution left and the value of $\lambda$ at $q$ will be generally different for each of the curves. $\blacksquare$

I am just answering my question in a way that is more transparent to me. There is no extra information here compared to the accepted answer or comments therein.

Not the answer you're looking for? Browse other questions tagged general-relativity differential-geometry observers or ask your own question.

4
How a reference frame relates to observers and charts?
14
How one uses the definition of observers in General Relativity?
1
Killing vectors and conserved quantities in general relativity
2
What is global Lorentz transformation and what is local Lorentz transformation?
0
Special Relativity: How do observers measure distance?
2
Difference between coordinate time and proper time in general relativity
1
Proper time in General Relativity and change of coordinates
1
Ιn a Kerr Spacetime (for example) how can you relate the simultaneity of a ZAMO observer with the coordinate time $t$?