Simultaneity on a train

Lets say that at each end of a train car there is a rocket engine and that the train car is presently at rest on the tracks. Also, the two engines are pointing in opposite directions. If someone positioned at the middle of the car flips two switches simultaneously, both rocket engines will fire at the same time. In turn the car does not move since the power output from both opposing engines cancels out. Even if the train car is in motion at a fixed velocity, again this has no effect, so the passenger feels no change at all in the train cars velocity.

However, from someones point of view who is at rest relative to the train tracks, it appears that one rocket engine fires before the other, but this observer too notices no change in the trains velocity.

How can this be?

Sequence of events, seen from the train's frame.

Sequence of events, seen from the track frame:

Edited to correct: Wait, wait, wait. I'd missed the part where the train starts out at rest relative to the track. Given that, there's only one frame of interest here --- namely the frame in which both the train and the track are initially stationary. So there's no need to bring in the track observer at all. The above "sequence of events, seen from the train's frame" remains correct. The "sequence of events, seen from the track frame" is correct if the train is moving along the track, but superfluous otherwise.

A train car has opposing rockets mounted to each end. Igniting them simultaneously, from the perspective of the middle of the car, produces no net force/acceleration on the car. An observer standing on the track a distance from the car sees one rocket engine ignite before the other.
* The distant observer expects that the car will move, given the indication of unequal application of force.
* Why doesn't the distant observer see the car move? 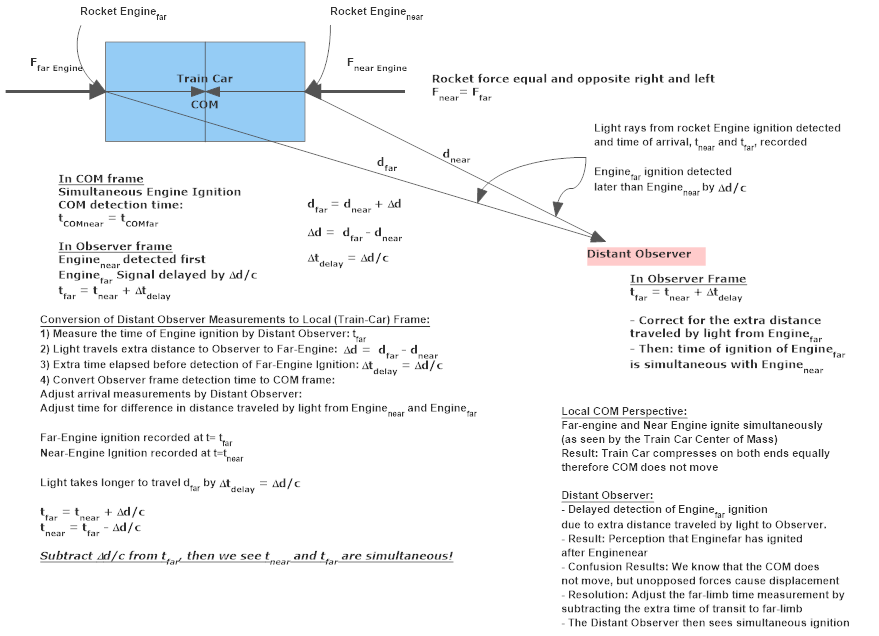 Observer at the Center of Mass:

Distant Observer - down the tracks:

Resolution of the Expectation of Movement
* (Note: There is actually no observed movement of the center of mass, and we must resolve this with our (initially incorrect/naive) expectation.)

Regarding Rigidity, Delayed Measurement, and Center of Mass Displacement:

Summary: the local-frame, where force is applied to a mass, is the primary frame to which we must refer in our evaluation of the actual local acceleration and displacement of a mass when observed at a distance. Thus, we must correct the time measurements of distant observations to transform the distant-frame measured times into local-frame time to correct our measurements to correctly predict the actual movement of the mass and pressure waves.

Observations are frame dependent. That means, if the observer is closer to one engine, they see that engine fire first. Observations are not chronologically accurate. Just because we see something first, doesn't mean it occured first. Now, causal events are always perceived in chronological order. You can't see a building explode before seeing a rocket strike it. It's only unrelated events which occur in different locations which can be observed in reverse chronological order.

9
Collision and simultaneity in special relativity