Can we measure dark matter's effect on spacetime?

I'm not a physicist or mathematician at all, just very curious, so sorry if this is a dumb question.

Now I understand we can make astronomical observations and say, "Oh, 85% of gravity in the universe is unaccounted for, so very indirectly, we've detected dark matter." By the way, I think it's better described dark gravity, because we don't know that it's matter, but I digress.

So I loosely understand the trouble detecting this stuff is that it doesn't interact with ordinary matter, the same kind our detection equipment tends to be made from. Is it instead possible to look for it indirectly, perhaps its effect on spacetime? I suppose you could say that's what the astronomical observations are, but I'm thinking more along the lines of an experimental apparatus. Something specifically designed to detect - and only detect - dark matter particles (if that's what they are), so when one flies by, it's unmistakable signature is observed on spacetime.

I suspect the response will be that spacetime isn't something we can see or build something to monitor in this way, or the effect of a single dark matter particle would be too small to observe on a section region of spacetime, but what the heck...

Is there a way we might be able to observe spacetime being tugged this way or that by a dark matter particle passing by? Or maybe some lasers or particles being disrupted due to a change in spacetime that can only be explained by dark matter being about.

To start with, what is called "dark" in cosmological maps, is two things, energy and mass. 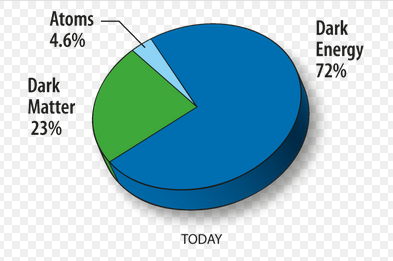 Estimated division of total energy in the universe into matter, dark matter and dark energy based on five years of WMAP data.

The luminous matter that our detectors can see from the copious light emitted is less than 5% of the mass and energy needed to describe the observations. Dark matter takes 23%, and the rest is dark energy. All these observations are second hand from seeing the way the luminous mass of stars, galaxies and clusters of galaxies is moving, and fitting the motion with a Newtonian model for "small sizes" like the rotational curves of galaxies, and General Relativity for the over all cosmological Big Bang model.

Your question on particles composing dark matter concerns less than 23% of the mass/energy in the universe. Dark energy is a different story, not concerning particles but just observation of accelerated motion of clusters of galaxies.

There are various models for dark matter: from small planets which would not radiate any light, to primordial micro black holes, and to the dominant weakly interacting particles, WIMPS, making a halo around galaxies and clusters of galaxies. Weakly interacting because they do not shed enough light to be detected by our instruments.

Yes, there are a number of experiments designed to measure WIMPS, and it depends on what model is used to model the particles. At the moment they give limits on the existence of such particles.

Now this concept of yours :

Something specifically designed to detect - and only detect - dark matter particles (if that's what they are), so when one flies by, it's unmistakable signature is observed on spacetime.

is fulfilled by these experiments, because space time is generated by the energy and masses in the region, so one can say that all measurements are effects on spacetime :). That is not the way we , experimentalists, look at it, because the space time measures/units of effects from particles would need huge negative exponentials. We choose to use the everyday energy and momentum measurements to declare a limit or announce a discovery.

If I understand correctly, you're asking if it's feasible to build an experiment that measures the gravitational force (which is what you mean when you say "its effect on spacetime", I think) of a dark matter particle as it passes the detector. We don't know the mass of the dark matter particle, but there are a number of well motivated guesses at what range it might be in. Best to pick a heavy one to maximize the effect, so let's go with a $100\,{\rm GeV}$ WIMP. Particle physicists like to talk about masses in units of energy for some reason; a quick conversion gives $1.7\times 10^{-25}\,{\rm kg}$, or $\sim100\times$ the mass of a proton. Let's say it passes quite close to the detector. At a distance of $1\,{\rm mm}$, it will exert a gravitational acceleration on the detector of about $10^{-29}\,{\rm m}\,{\rm s}^{-2}$. Ok, that's a small number, but how small?

A $1000\,{\rm kg}$ car on the other side of the world ($10\,000\,{\rm km}$) from your detector exerts a gravitational acceleration of $10^{-22}\,{\rm m}\,{\rm s}^{-2}$ on it. That's more than a million times the acceleration due to the dark matter particle. When that car moves, it will cause a change in acceleration on your detector. Granted, this will look different from the change you'd expect from a dark matter particle passing nearby; it will change more slowly. But it adds a bit of noise getting in the way of the signal you want to measure. You're basically going to have to control for all the mass in the entire world (a sparrow at a distance of $100\,{\rm km}$ dwarfs your signal too, by the way) and how it's moving then try and model that and remove the noise from all of it before getting at the desired signal. Not feasible. Putting your detector in space won't help, either. Passing dust grains or cosmic rays will provide plenty of noise there, too.

Not only does dark matter not interact with "ordinary" matter, but also because it does not emit photons (or some equivalent) then it does not clump together like ordinary matter does. So there are no dark matter equivalents of suns, planets, nebulae etc.

Not the answer you're looking for? Browse other questions tagged cosmology spacetime dark-matter or ask your own question.

7
Experimental foundations of the “otherwise galaxies would not hold together” argument for dark matter
2
Origin of cusps in simulated dark matter halos
36
What are the alternative theories of dark energy? ($w \neq -1$)
9
Why does nobody ever consider the possibility that the universe is not smooth?