Does energy conversion happen when an electromagnet attracts an object?

I am doing science with my 6th grade son, and there is a circuit with an electromagnet (as below)

When asked to describe the energy conversion when the switch is turned on, part of the answer provided by the teacher indicates that electric energy is converted into kinetic energy when the electromagnet attracts the hinge.

Ignoring the obvious complications in understanding how magnets work (I am sadly still confused about that), this statement seems wrong for the following reasons:

Clarifications will be very much appreciated, I tried to work through the above questions with my kid but ended up being very confused myself. 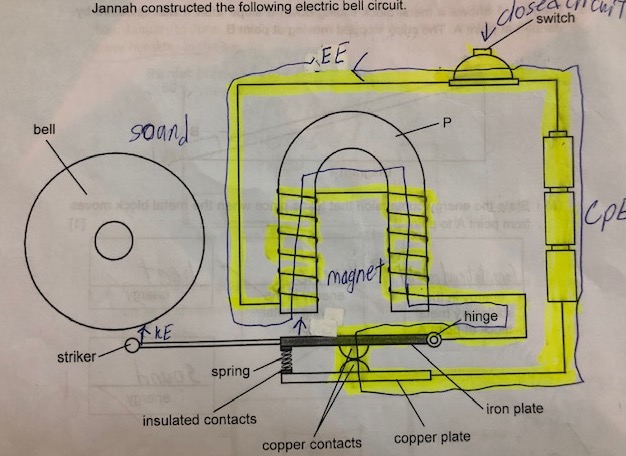 Any energy conversion seems to have been from the chemical potential energy in the battery to the current flow. The movement of the hinge seems to be an indirect effect rather than a direct conversion.

Indeed, but they are simply ignoring that conversion. The electricity is treated as stored so you're simply "releasing" it. If you replaced the battery with a mains wire and switch it would have the same outcome, so ultimately it's the electricity that's doing the work.

Is there is additional resistance added by the presence of the electromagnet? If not, there should be no energy loss, if yes, what's the mechanism of that loss?

Yes, the magnet definitely acts as a resistor, or more specifically, reluctance.

Magnetic fields are created when a current flows. In the case of a straight wire, the right-hand-rule tells us there is a field around the wire. For instance, if you hold your hand with the thumb pointing up representing the current in a vertical wire, the fingers of your closed fist represents the direction of the field.

When you bend the wire the into a ring, the field created at point A begins to overlap the field from point B. Lens' Law tells us these will interact in a way that resists the flow of electrons. From an electrical standpoint it looks like resistance. And yes, it definitely dissipates heat. The motion of the striker also effects this field.

Not the answer you're looking for? Browse other questions tagged electromagnetism electric-circuits energy-conservation or ask your own question.

2
Higher To Lower Electric Potential
5
What is happening to rotational kinetic energy when moment of inertia is changed?
9
What causes contact resistance?
3
$\vec{E}$-and $\vec{B}$-fields in RCL circuit
1
How do i interpret the following electric potential diagrams?
1
The sound energy when two or more objects collide
5
What changes in the electrons before and after a voltage drop?
0
Electric potential in a wire
0
Where do the charge in a series/circuits (?) come from?
2
Energy and Speed of Electrons in a Circuit