Is there a simple way to compute some physical constant from Feynman diagram statistics?

So from a starter fermion arc

the only possibility - at least the way I create these things, by adding pairs of vertices by splitting fermion arcs and linking the fresh vertices with boson arcs - is: 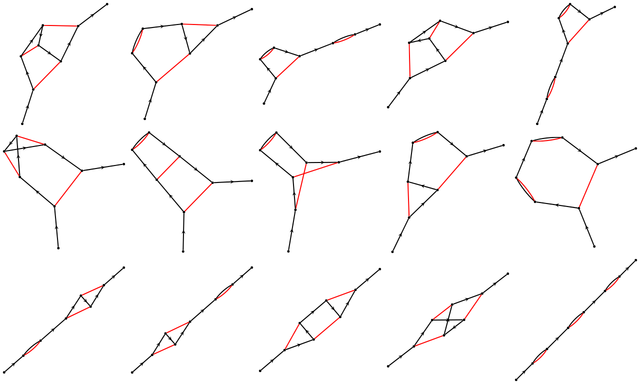 and then 105, and then 945 (for 10 interior vertices) and so on (I just killed it after a few hours runtime and it was working it's way through the many thousands of 12 interior vertex possibilities).

My question is: given all these diagrams, is there some simple procedure I can apply and have some fundamental dimensionless constant of the universe (or at least of QED) pop out the other end ?

Background: my interest in this stuff got started with the iconography of these diagrams and their visual aspects (e.g how to layout such things nicely, and how to plot them with some wiggly lines as per the usual convention for the photons will get some attention next), and the original driving idea was to do some nice big poster which gives some visual impression of how the number of possibilities explodes. But it'd be the icing on the cake for the poster to also be able to show that some physical property of the universe follows as a direct consequence of some statistics or whatever of the diagrams (capped with the "Nobody knows how it can be like that" Feynman quote no doubt).

Disclaimer: I know mathematics and computing but most of my knowledge of this area of physics is from reading "pop science" books and I'm well aware they grossly simplify things, so maybe I'm hoping for too much from the diagrams alone.

Update: following helpful input from Vibert below, I'm now generating the below for 2 and 4 vertex diagrams (a grey background indicates "one particle reducible" diagrams); these now include the expected virtual particle loops (missed in my first attempt above). Diagrams which are isomorphic by simple reversal of all the arrows are omitted in the interests of saving space.

Outcome: Well after digging into this a bit more it seems there's no getting away from Doing The Math, integrals and all. I was originally hoping there might be something as simple and understandable as "well there are N diagrams in this category, M diagrams in that category and so the correction to the 1st order approximation is (N-M)/(N+M), which is more accurate". But material on Lamb Shift corrections gives an idea of what's actually involved (e.g the contribution from the simplest diagrams is ~1058 MHz, most of it from one case), while the next order's contributions sum to on the order of 100kHz.

What you're showing are diagrams that contribute to the two-point function/propagator of the electron. Essentially these are so-called loop corrections to the electron self-energy, which plays an important role in the renormalisation of QED. If you organise the calculation properly, then these diagrams encode how the physical mass of the electron depends on its interaction with the photon.

There are some subtleties: first of all, you need only a subclass of these diagrams (called 1PI - look the exact meaning up in some textbook, such as Peskin-Schroeder). Next, you really need to calculate the corresponding integrals; the combinatorics alone doesn't tell you much. By hand, you can more or less calculate the diagram with one red line; for the rest, people use computer programs.

If you consider the result $f(\alpha)$ as a function of the coupling constant $\alpha$, it should mathematically be possible to show that $f$ has (formally) zero radius of convergence mainly by counting the number of diagrams, but that's not a very interesting result, physics-wise.

There is a nice set of lecture notes, by Cvitanovic http://chaosbook.org/FieldTheory/pdf.html, from which you could extract a bit more about the combinatorics of Feynman diagrams, it also has some pretty pictures. He was also among the people that computed higher order corrections (i.e. calculated Feynman diagrams with up to three loops as you showed them above).

The thing that you are talking about reminds me of something that I've heard from condense-matter people. You can have a look at that:

There is a peculiar method called "Diagrammatic Monte-Carlo". The authors of the method claim that the technique allows one to avoid the numerical sign problem. Though keep in mind that, as I understand, the attitude to that in the cond-mat community is rather skeptical.

4
Is there a way to compute (trivalent) Feynman integrals inductively from smaller diagrams?
2
Mølller scattering
1
Counting higher-order corrections in “ABC theory”
3
Tadpole diagram in QED
0
Higgs Feynman Diagrams
0
How do one find the first correction order of $\lambda$ for scattering cross section?
0
How do I know if the propagator in my Feynman diagram is a photon or a fermion?