Dynamically changing acceleration of object moving towards sun due to gravity

For a collection of sci-fi short stories set in the rather near future I need an approximation of the time it would take a space ship to travel from an Earth orbit to Ceres.

In a previous story of the collection I've simply stated the requirements, doing only a little calculation and research on whether my assumptions generally make sense or are completely off and illogic but now that I've set these values I not only have to make sure they generally make sense but also they fit together, but luckily everything is just an approximation so the physics won't get too complex.

So here's the defined data: the spaceship starts its journey on the moon Triton and flies a slingshot maneuver through the gravity of Neptune. After this point it has reached the peak velocity it may gain from burning its fuel and every additional acceleration experienced afterwards results from the gravitational force of the sun. Luckily, in the year the story is set in the sun, Earth, Ceres and Neptune line up kinda neatly (they really do, I have checked, Space Engine is amazing) so that eliminates a whole lot of difficult problems. Theoretically they might be able to use Saturn for a 2nd slingshot but the planet lacks behind and I'm not versed in interplanetary space navigation so let's just assume they don't. Thus the distance the ship has to cover is:

After checking with real spacecraft speeds and assuming technical advances but no wild breakthrough I proposed the travel takes about two years, thus:

Considering the fastest spacecraft these days was the New Horizons with $45\frac{km}{s}$ before the Jupiter slingshot - which only accelerated it by $4\frac{km}{s}$ that seems to be an adequate value. Let's assume this is the ship's final velocity before artificially decelerating when reaching Ceres. I know this will extend the travel time but that's much better than decreasing it when assuming it's the starting speed. Also I don't expect that much of a difference, but I do expect the ship from Earth flying to Ceres to be slowed down by a good amount - after all, New Horizons was slowed down to $19\frac{km}{s}$ when it reached Jupiter.

So what I need now is the actual speed the spaceship may reach with its engine and a formula on how much the 2nd ship, the one from Earth, will be slowed down over the time and distance to Ceres - which I assume would be the same formula to calculate the change in velocity of the ship from Neptune. And that is the part I have trouble wrapping my head around as it's been some years since using integral calculations the last time. So, if I want to calculate the actual maximum velocity of the spaceship from burning its fuel I have to subtract the gravitational acceleration. The problem is that the gravitational force increases exponentially the closer the ship gets to the sun. The formula to calculate the gravitational acceleration at a specific distance of the body exerting the force is the following:

In case of the gravitational acceleration exerted on Neptune and Ceres by the sun this is: 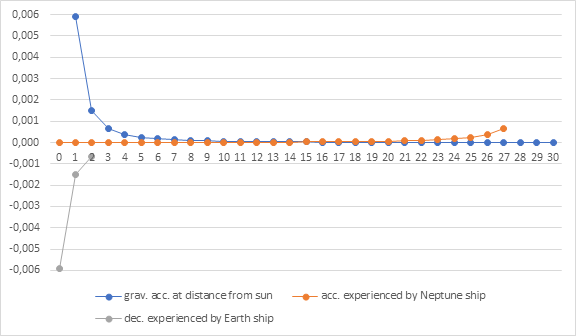 It doesn't contain any information about time and the distance travelled by the space ship, so I have no idea how to get a formula that I can derive for the calculation of the velocity in respect to the changing acceleration.

As an introduction to my recommentation let me tell a related story.

When the writer Andy Weir was doing research for the novel 'the Martian' he assumed that he would have to do all the orbital mechanics calculations by solving the equations. He struggled with that; things were looking hopeless. Then he had an opportunity to ask someone how NASA does that for all the space missions. Weir was surprised to learn that NASA calculates trajectories with numerical analysis.

That is, the engineers set up a numerical simulation, and then they let a computer crunch the numbers. So, starting with a known velocity and direction of motion they calculate where the spacecraft will end up and if that is not at the spot where they want to end up they plan a course correction.

I assume there is some trial and error in the planning stage. To plan a course correction, I imagine, the engineers first evaluate the result of a course correction that should be pretty close. The computer predicts where the spacecraft will end up, and depending on that outcome the plan for the course correction is adjusted. I imagine it will be something of an iterative process, homing in on the sweet spot.

So that is my recommendation to you: set up a simulation, and use an iterative process to home in on the trajectory that fits your requirements.

Or you may decide to use a general purpose simulation platform, one where you enter the equations yourself.

Not the answer you're looking for? Browse other questions tagged newtonian-gravity acceleration velocity or ask your own question.

1
Acceleration to lightspeed using gravity
1
Comparison of G force in space with G force on Earth
0
Will an object fall towards the sun if it not orbiting the sun?
1
Under relitivity, does apparent acceleration decrease towards the front of an accelerating object?