Could you use a laser beam as a modulated carrier wave for radio signal?

There have been successful experiments in modulating sound over a carrier ultrasound wave. Not so long ago, I've even seen an DIY implementation on Hackaday.

I also encountered and tested a program that would modulate FM wave over a high-frequency PWM signal.

I don't remember much of the background math but my layman observation is that if you could draw a sinusoidal wave over a signal, then for all purposes the wave is there.

My question is then if you could do the same thing with a completely normal laser beam. That is, change the beam intensity as to form a FM wave over the visible light wave.

This picture kinda illustrates what I mean, not to scale: 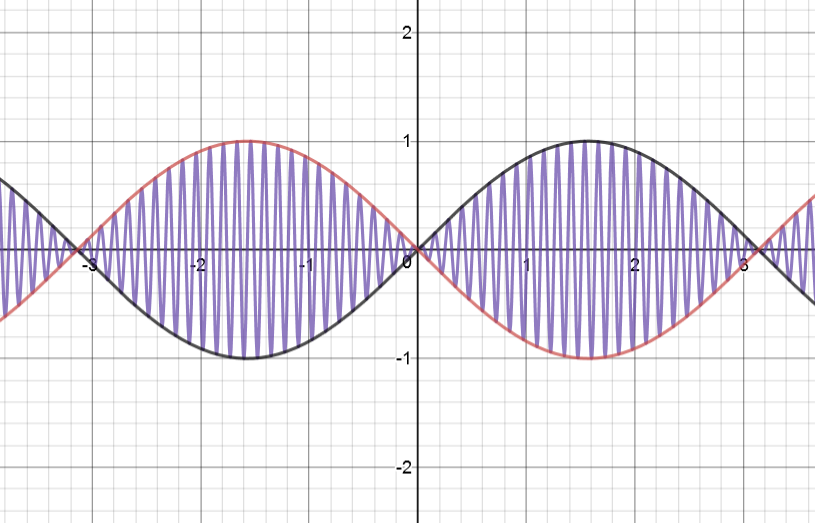 The purple line is the frequency of the laser beam (as I said, it's not to scale) and the red line is the intended signal transmission, which is driven by some circuit powering the laser.

The idea the is that the laser beam should demodulate into the FM signal on the target. But I can't really imagine that happening at all.

If this isn't possible, and I think so, why exactly does it work with ultrasound but not a laser?

It's definitely possible to modulate a laser beam to carry radio frequency signals, using any of several different methods. Amplitude modulation, frequency modulation, and phase modulation are all easy. An Acousto-Optic modulator can be used to modulate either amplitude or frequency at radio frequencies. Many decades ago I designed (and a friend built) a laser transmitter-receiver system that simply bounced a collimated laser beam off an aluminized Mylar film stretched across a small speaker cone. An audio signal fed to the speaker caused a "drumhead" deflection of the film, which distorted the reflected wavefront, causing slight deviations from collimation. At a distance, this resulted in amplitude modulation of the beam's brightness- easily detected using a photodiode.

The frequency of a laser is directly related to its cavity length, defined by the distance between its two mirrors. A piezoelectric crystal is easily used to drive one of the mirrors and thereby modulate the laser frequency.

The idea the is that the laser beam should demodulate into the FM signal on the target. But I can't really imagine that happening at all.

It is possible to do this, but is substantially more complicated and expensive for many use cases than using amplitude modulation (AM). To learn more, you can google the term coherent optical communication.

Using optical phase or frequency modulation does give a small advantage in the distance that can be spanned on a single fiber-optic link, so it is most often used in long distance links (particularly undersea links) where minimizing the number of amplifiers and repeaters (and the expense of accessing them for maintenance and repairs in the event of failure) is at a premium. It's also starting to be used in shorter links when maximizing the total data capacity of the fiber is required (i.e. when the the capacity target is measured in 100's of gigabits or terabits per second).

In order to send an FM signal over a fiber optic link for a short distance (less than 100 km, maybe), you might rather use subcarrier modulation. This means make a radio-frequency signal with your message signal frequency-modulated onto it, and then use that RF signal to amplitude-modulate the optical carrier. You would then use an ordinary optical power detector to recover the RF signal from the optical carrier, followed by a radio demodulation circuit to recover the message signal. This kind of modulation is well known and often used in optical CATV systems, for example.

Yes you can, and indeed this is done.

Note that this is AM (amplitude modulation) not FM (frequency modulation): you are modulating the amplitude of the carrier (laser here) not its frequency. I don't know if it's easy to modulate the frequency of a laser but I suspect not (edit: see the other answer by S McrGrew: it is in fact). Note also that probably all real applications will be digital: they'll rely on encoding a bit stream into the laser somehow which makes them much more robust to noise & so on.

22
How do you make a spherical radio wave?
22
What is the scientific explanation for radio waves bending around the Earth?
4
Sidebands, cavity tuning and detection in interferometric gravitational wave detectors
7
If turning a perfectly monochromatic laser on for a finite time gives a frequency spread, where did the other frequency photons come from?
0
Is there a beating note for a sideband modulated laser beam?
0
Why does amplitude modulated wave take the frequency of a carrier signal when passed through air?
0
Does laser beam (EM wave) affect magnet next to it?