How can a day be exactly 24 hours long? [closed]

You can't calculate the length of a mean solar day just by taking the mean of the shortest & longest apparent solar days. That would work if the apparent day lengths varied in a simple linear fashion, but that's not the case.

From Wikipedia's article on the Equation of Time,

The equation of time describes the discrepancy between two kinds of solar time. [...] The two times that differ are the apparent solar time, which directly tracks the diurnal motion of the Sun, and mean solar time, which tracks a theoretical mean Sun with uniform motion.

To correctly calculate the mean solar day length you need to integrate the apparent day lengths over the whole year. (And you need to decide exactly how to define the length of the year, which is a whole complicated story in its own right).

The average value of a distribution is not the average of its minimum and maximum. For example, the average value of (0,0,0,4) is 1, not 2. Earth's orbit eccentricity is not 0, nor the Moon's one, so your distribution of day duration is probably slightly asymetric, hence the 4 seconds discrepancy. Sum all day duration of a year, divide by the number of days, you will get a better value.

The original definition of an hour was 1/24th of a day, no matter how long the day was at the time. The durations you're quoting are only possible with the help of extremely modern definitions made possible by redefining the second (keeping the minute and hour fixed as 60 seconds, and 3600 seconds, respectively).

The length of the SI second depends on the location, and TAI is based on observations done by atomic clocks in various laboratories around the world ("UTC(k)") and corrected for the geopotential on the sea level. TT is a theoretical length of the SI second on the geoid, and as such is never known perfectly. Approximation of past TT is revised annualy by BIPM. In contrast, TAI and UTC are determined and kept fixed after about 1 month past the fact (published regularly in Circular-T by BIPM). Laboratory-specific UTC(k) time scales and the GPS time (based on the US Naval Observatory Master Clock) are known in real time. Other time scales include the geocentric time, barycentric time and the ephemeris time. The length of 1 s is slightly different between all of them, some of the differece is due to time passing differently based on location in the gravitation potential. For example, time passes faster in the solar system than on the Earth's surface by about 0.5 second a year.

Figure 1. Excess to 86400s of the duration of the days, combined GPS solution, 1995-1997. From https://www.iers.org/IERS/EN/Science/EarthRotation/LODgps.html 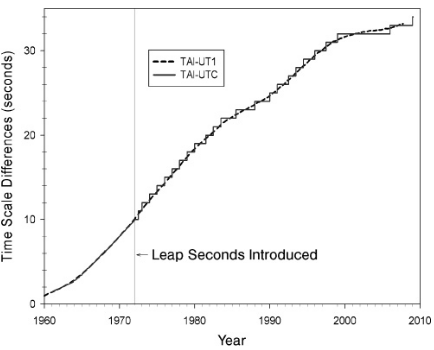 Not the answer you're looking for? Browse other questions tagged time astronomy earth solar-system metrology or ask your own question.

1
Current length of the solar day?