If white light were split through a prism, would it emit more wavelengths than are contained within the visible light spectrum?

If white light was refracted through a prism, creating the colors of the rainbow, would it also create wavelengths of light in the infrared and ultraviolet range, which fall in the non visibility factor of our eye's wavelength range, but because of the low energy quality of the light itself, it couldn't extend its energy level output of wavelengths past that of infrared? And if so, is that why gamma rays don't form out of that splitting of white light?

If white light was refracted through a prism, creating the colors of the rainbow, would it also create wavelengths of light in the infrared and ultraviolet range,

If your white light was, for example, sunlight, then it would have included IR and UV light, and those wavelengths would be split out by the prism just like the different wavelengths of visible light.

In fact, William Herschel's observation that a thermometer was warmed up when placed just beyond the end of the visible beam produced by a prism, just as it would have been if it were placed in the visible part of the prism's output, is what led to the discovery of IR light.

why gamma rays don't form out of that splitting of white light?

The prism only "splits up" or spreads out the light that goes into it. It doesn't create any wavelengths that weren't present at the input.

So if your (nominally) white light doesn't contain any gamma rays, or IR, or some particular wavelength of green, then that color won't be present in the output of the prism.

Furthermore, gamma rays likely don't interact with the molecules in the prism the same way that visible (and usually UV and IR) do so gamma rays won't show up in the prism output in the same place you'd expect them to by extrapolating from the deflection of the visible wavelengths. The reason for this is that the prism effect comes from some vibrational mode of the electrons or molecules in the prism reacting to the different frequencies of the electromagnetic waves that form the light beam, and as the frequency gets higher (and wavelength shorter), the electrons or molecules won't be able to move fast enough to respond in the same way they did for lower frequencies.

Light is refracted in a prism because the refractive index depends on wavelength. For a prism made of silica, the dependence is relatively small for the visible part of the spectrum (red curve near lambda=500nm). However it is still enough for a rainbow to form. Longer wavelengths (IR) will also be refracted, but the exact magnitude of the effect depends on how n changes with wavelength. 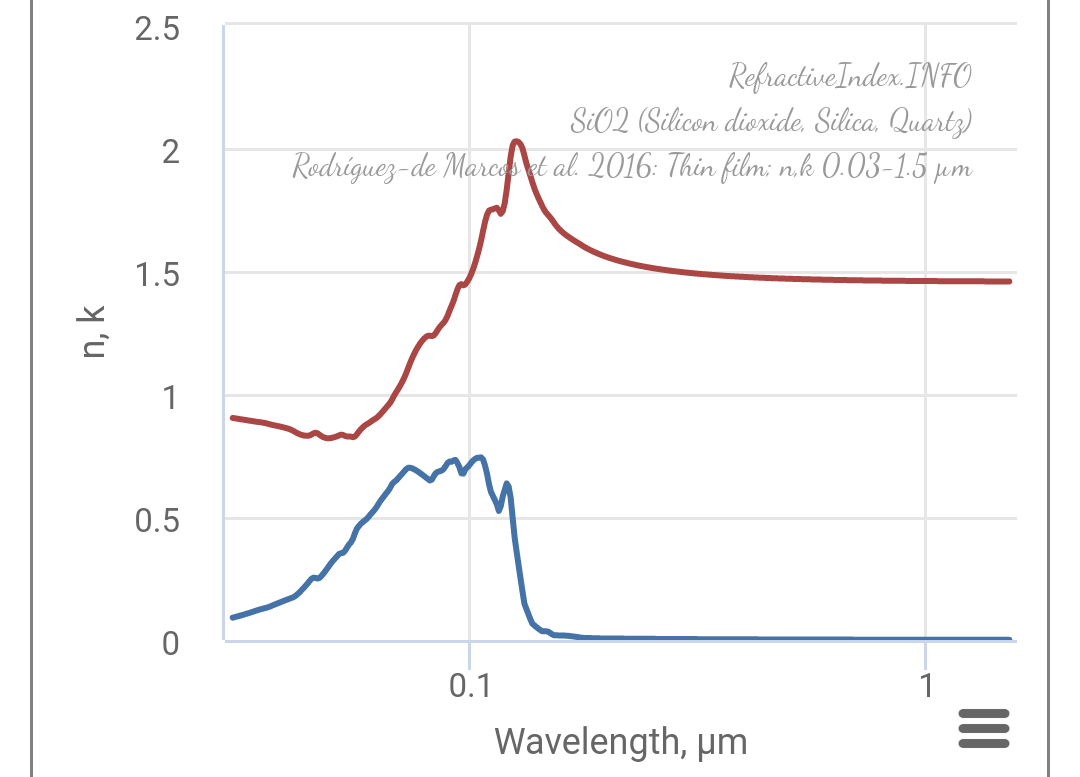 Higher energy photons will also be refracted, but in practice they will be hard to see. Light from natural sources (such as the sun) emit at many different wavelengths depending on their temperature. Unless the emitter is very hot, there will not be a lot of light at short (high energy) wavelengths. Moreover, many materials are highly absorbant to short wavelengths (see blue curve).

Wavelengths are not countable, so we have to reinterpret the question a bit.

The same distribution of wavelengths will exist after the prism as before.

Not the answer you're looking for? Browse other questions tagged visible-light wavelength or ask your own question.

4
What was the motivation behind suggesting the trichromatic theory of vision?
2
What gives substances their color?
3
Physics of color: why do visible colors absorb all colors except the color itself?
6
Why are thin soap bubbles colorless?
0
Wavelength-division multiplexing (WDM) and white light spectrum wavelengths differ
0
Light and transparency
0
Can an electromagnetic wave travel less than the speed of light and yet perceived by the eye as a light?
1
If I were mixing lasers to generate a white light source for an old film projector, is there a limit to the colors that can be projected off the film?