Inductor and Capacitor in Parallel

I've been staring at this for 10 minutes and I'm soooo confused. Hopefully, you guys can help! 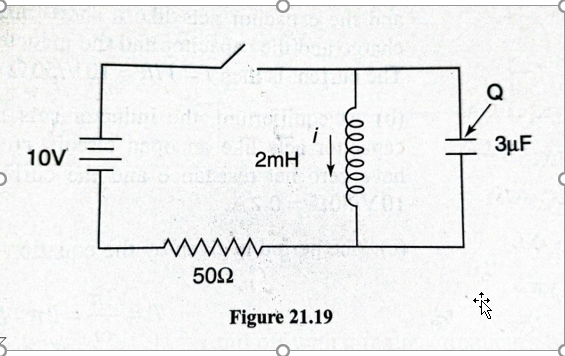 So, let's say we close the switch. From what I understand, the capacitor will charge up to $10V$ almost instantaneously, while no current will flow through the inductor. At the very beginning, there'll be $0.2A$ flowing through the resistor.

But what happens if we leave the switch closed for a long time?

However, the book then says that after an infinite amount of time, the capacitor will be at 10 volts.

That seems wrong to me...if the current through the inductor ever stops changing, the inductor would just behave like a shorted section of a circuit, right? Wouldn't the capacitor discharge through it?

Buuut, since the inductor and the capacitor are in parallel, wouldn't that automatically mean there MUST be no charge on the capacitor either?

Is my book wrong in saying after an infinite amount of time with the switch closed there will be a 10-volt difference across the capacitor?

This is an edit after reading some of your answers and comments - they've been great. I didn't elaborate enough on what my book specifically said in my original post, so this edit is just to address that. However, the fundamentals of the question remain the same.

The exact question is this:

After a very long amount of time, the switch is opened. What is the maximum current?

Then, their explanation is as follows:

Like I said above, that seems wrong to me because I don't think the initial capacitor voltage would be $10V$.

In fact, I don't think the voltage across the capacitor would EVER be $10V$.

Plugging in an initial current of $0.2A$, I get that the maximum voltage across the capacitor is actually: $5.16 V$.

This is correct. To find the DC steady state solution for this circuit, replace the inductor with a (ideal) wire and replace the capacitor with an open-circuit.

Why? In DC steady state (the solution as $t\rightarrow\infty$), all the circuit voltages and currents are constant.

Now, recall that the voltage across an (ideal) inductor is given by

For the (ideal) capacitor, the current through is given by

In this case, it follows that both the capacitor current and voltage are zero in DC steady state.

Is my book wrong in saying after an infinite amount of time with the switch closed there will be a 10-volt difference across the capacitor?

Yes, if your book states that the capacitor has non-zero voltage across at infinite time, it is wrong for the reason I give above.

From what I understand, the capacitor will charge up to 10V almost instantaneously, while no current will flow through the inductor. 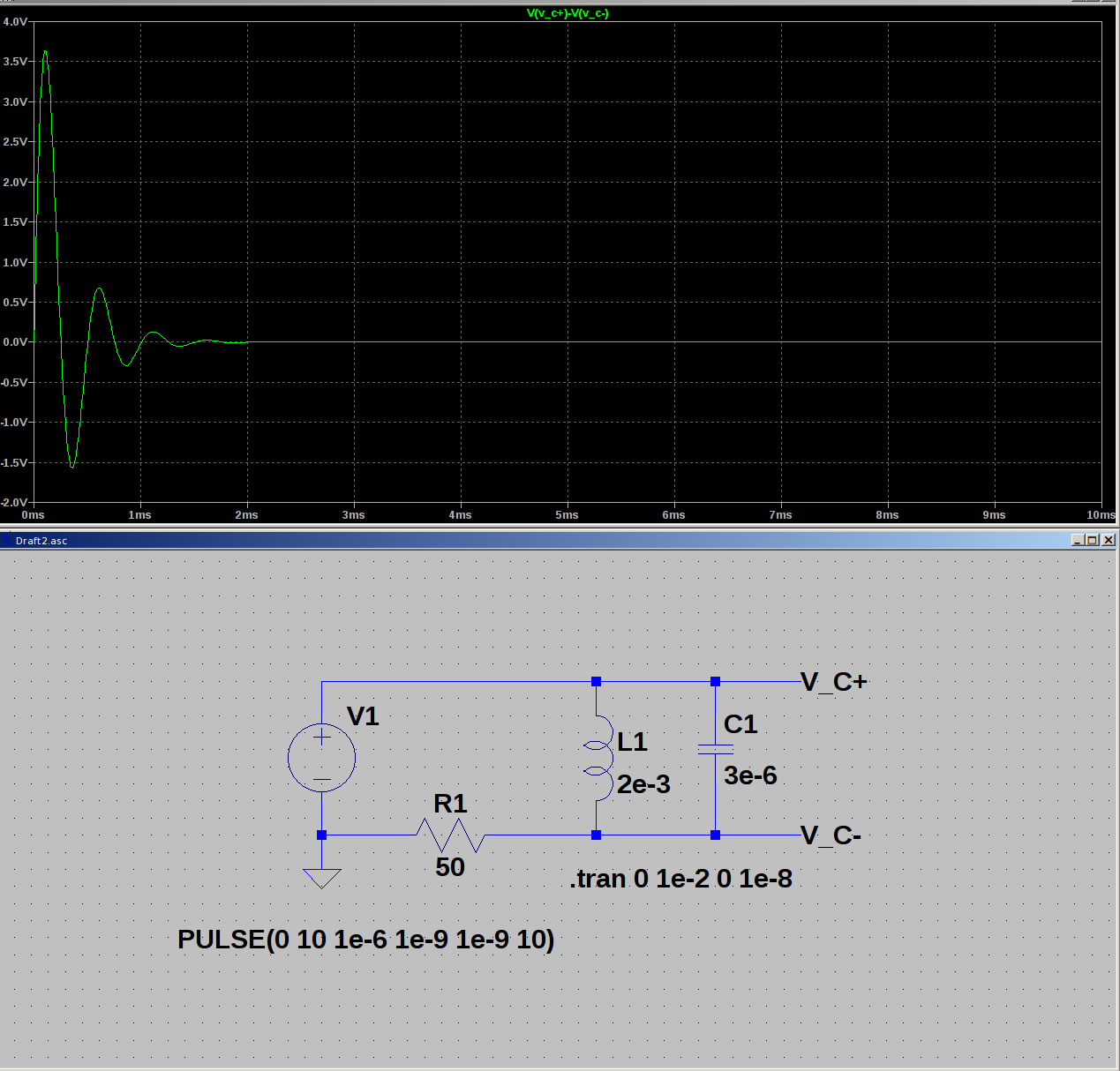 Good question, as the cap is charging the inductor back emf is decreasing, back emf is 0 at infinity time. Yes the cap will certainly have 10v as long as the switch is closed. The interesting part is what happens to the charge on the cap, I believe it eventually goes to zero because the bottom of the cap will be at 10v at an infinite time.

The basic rules for ideal capacitors and inductors are as follows:

You can’t change the voltage across an ideal capacitor instantaneously.

You can’t change the current through an ideal inductor instantaneously.

After a long time with the switch closed:

Alfred Centauri has shown you the equations for the basis of these rules.

So, when you say,”…the capacitor will charge up to 10V almost instantaneously” is incorrect. But you are correct that that the current through an ideal inductor cannot change instantaneously.

So it appears that the inductor and capacitor are initially in parallel resonance.

Now when the switch is closed for a long time inductor is now a short-circuit with 0.2 A flowing in it and the resistor, and there is no voltage across the capacitor.

So your book is correct about the current in the inductor and wrong about the voltage across the capacitor.

From my knowledge, when you close the switch, a Back-emf will be indced across the inductor which will be equal to 10 V. Now since the inductor and capacitor are connected in parallel , the Voltage across them will always be the same ( Back emf ) . Now you can apply Kirchoff's loop law in the loop containing the battery, resistor and inductor and conclude that the magnitude of back-emf decreases with time , and hence the charge on the capacitor. After a long time , the back emf across the inductor as well as the charge on the capacitor will be zero and both will behave like short-circuited paths and the current through the resistor will be 0.2A

One way to think about this is to regard the whole right hand half of the circuit diagram - both the parallel capacitor and inductor - as a single "component" (Indeed, this is just further application of the general idea of the "lumped element model" that we are using to do these kinds of simple analyses in being able to treat a circuit as composed of isolated components at all - and it's important to point out that this model has limits, however fortunately, we are well within those in this case), with its leads being the top segment and bottom segment after the resistor, in the diagram. Then you effectively have a circuit that looks like a voltage source, followed by a resistor, followed by this strange "component", in a series loop.

As a result, the total current through that "component" can never be more than $\frac{V}{R}$, or 0.2 A. Hence, looking at the sub-components of our "component" individually, i.e. the parallel inductor and capacitor, once current stops in the capacitor, the only option left is for the inductor will have to be taking that full 0.2 A as a simple conductor, as you mentioned, since current through it will no longer be changing. It will not be a "short" circuit because it is still behind that series resistor and so limited current.

With regard to your question as to whether the capacitor will discharge back through the inductor upon reaching maximum charge, the answer is no, and the reason for that is essentially the same as why a capacitor won't discharge back through a simple RC (no L) circuit: there's still a voltage drop, i.e. electric force, being applied from the voltage source and that will be holding it at maximum charge. For this case, remember that in a parallel connection, both components get the source voltage.

However, here's the interesting bit: if, on the other hand, you were to sever the wires connecting the inductor to the voltage source, then yes, indeed, the charge on the capacitor would now begin to flow through the inductor and it will discharge, as that holding force is no longer present. The inductor will then, as one may think, try to fight the resultant rising current, and it will do so on both the upswing and the downswing (as the capacitor approaches neutralization), meaning not only will it slow the capacitor's discharge, but it will at a certain point also try and "yank" charge back, and this will cause an oscillatory behavior: what you have now is a so-called "tank circuit". In theory, the charge will oscillate back and forth through the inductor forever, reversing the capacitor's polarity over and over again, however, in actuality, just as with many other conservative (i.e. not "creating energy from nothing" but rather simply keeping it in literal motion forever) "perpetual motion" schemes that seem to work in theory, the slight internal resistance in the wires due to being imperfect conductors will eventually dissipate all the energy into heat and the system will return to charge neutrality. Mathematically, the behavior of this circuit can be described as a damped harmonic oscillator, similar to a mass on a more realistic spring which is dissipating energy in internal friction due to bending the realistic material.

What you have is a filter. During the first part the cap will charge but unlike the inductor the cap is not an closed circuit Once it saturates there is no where for the emf to go. The coil provides a path for the current through the resistor so you will have current there. The interesting things happen when you apply AC power or open the switch. Then the EMF around the inductor collapses pushing current through the coil and the capacitor discharges, providing a temporary uninterupted power supply to the circuit. The effect is that, provided you reclose the switch fast enough, the circuit hardly recognizes that the switch was open.

If we assume that the variable voltage on the resistor acts to dampen any LC oscillations after the switch is closed (as indicated by the graph from MR. Centauri), then after a time, the voltage on both L and C will be zero and the L will have a current of .2 amps. If the switch is then opened, the resistor will be out of the circuit, and the energy in the inductor will oscillate between the inductor and the capacitor. You calculation for the maximum voltage under those conditions is correct.

Not the answer you're looking for? Browse other questions tagged homework-and-exercises electric-circuits electrical-resistance capacitance inductance or ask your own question.

3
Capacitors and Resistors - Series or Parallel?
1
Capacitor / inductor resonance
4
Current in inductor just after switch is closed
2
Phase Locking in Parallel RLC at Resonance Frequency
6
Inductor and Capacitor with a DC supply
0
Current when capacitor and resistor placed in parallel?
0
Why does the capacitor charge through a resistor?