I make my own Maple syrup and have to boil away lots water from the sap to make syrup. I have a propane burner and a wide roasting pan and a deep stew pot, both hold about the same amount of sap. My question is does the wide pan make the water boil away quicker? Intuitively, it feels like the more surface from the pan would allow more steam to escape. However, it seems that the wider pan with more surface area would have more heat transferred to ambient instead of into the sap 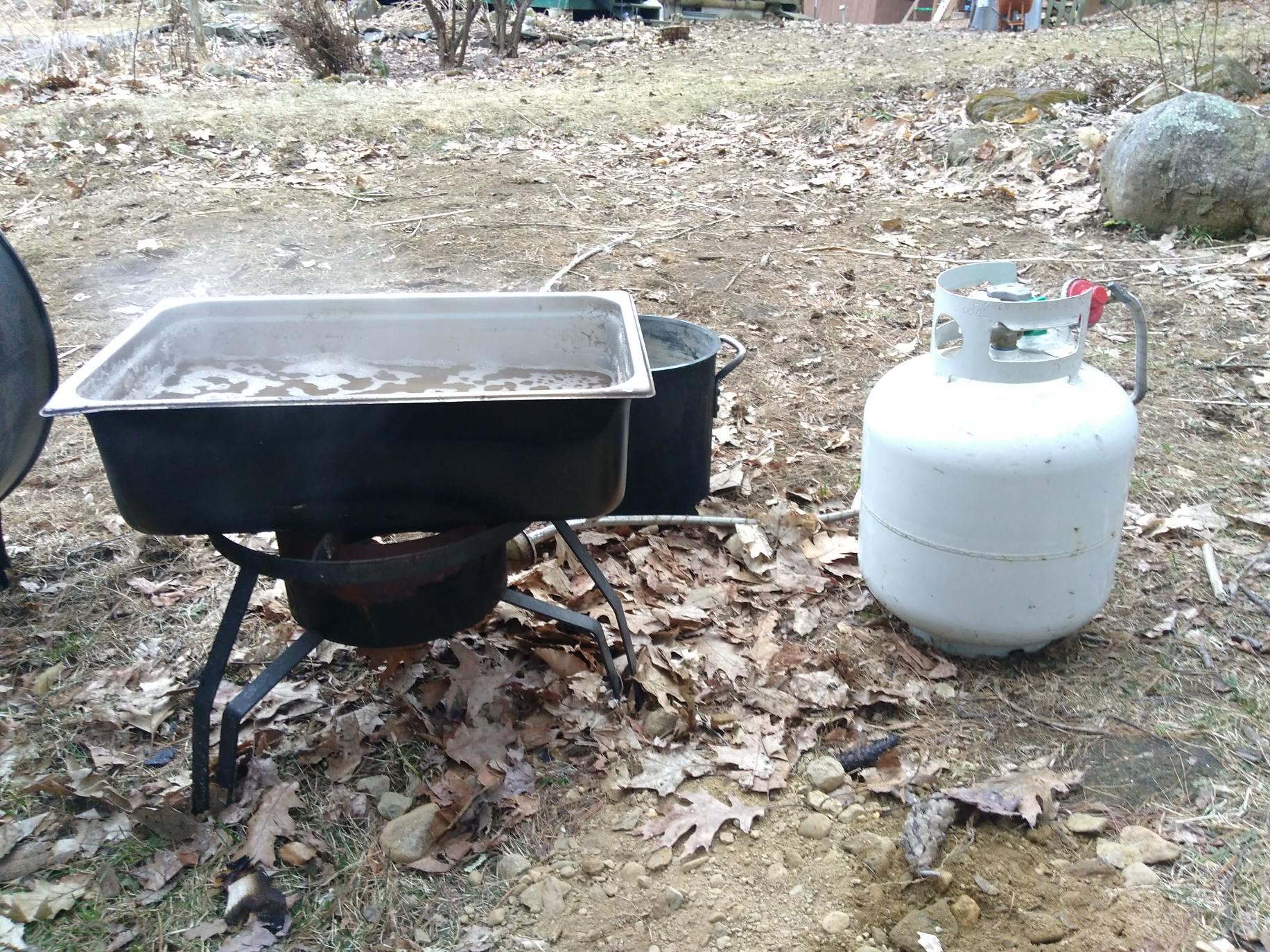 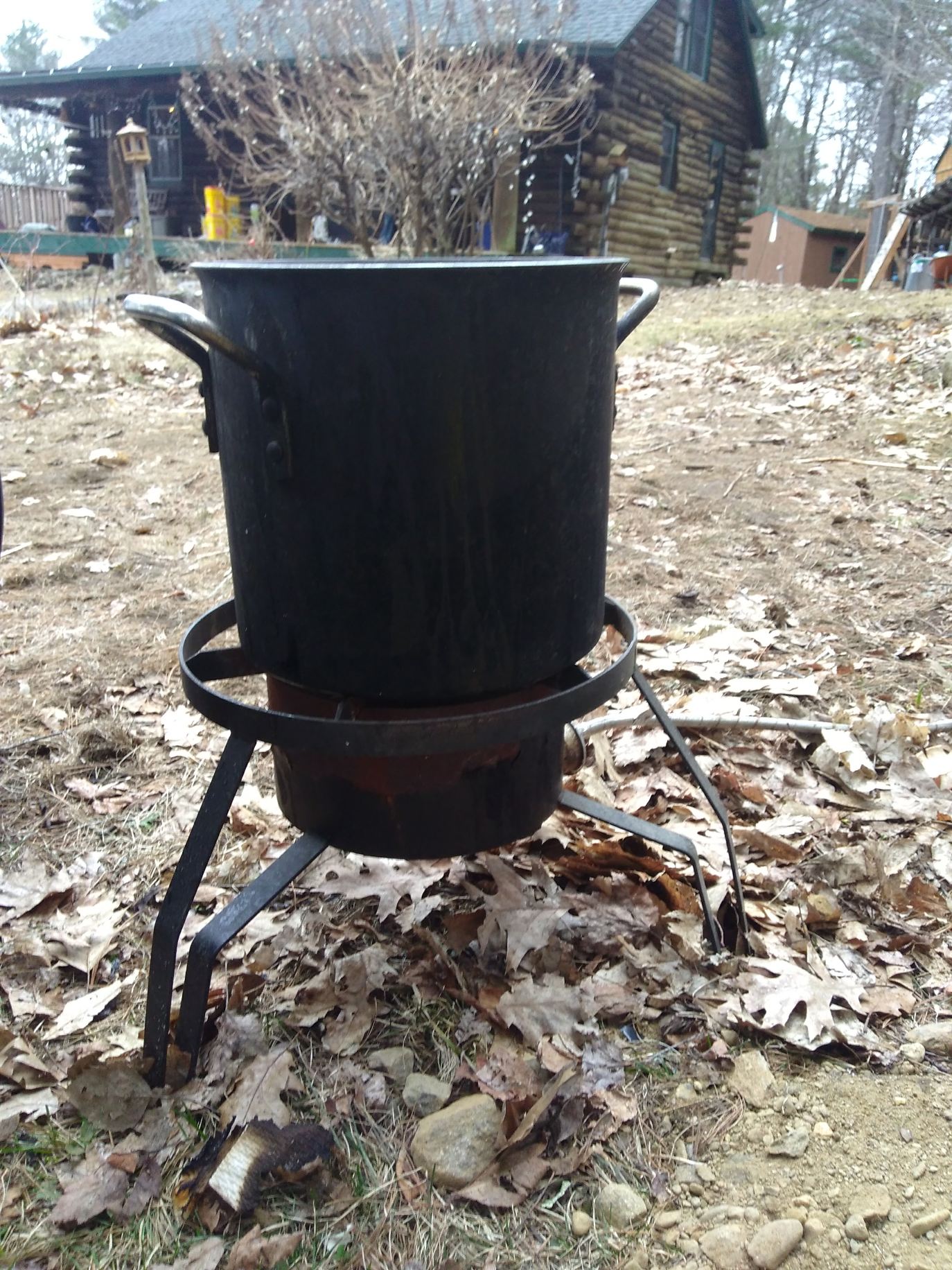 Here is an intuitive way to think about it:

A puddle on the ground will evaporate even if the water is not boiling. The same amount of liquid would take much longer to disappear if it were contained in a cup.

There is a nice microscopic reason for this. Imagine each water molecule in the center of the liquid as being "boxed in" by 26 neighbouring molecules (as if it were in the center of a 3x3 rubrik's cube). All these neighbours attract the central one and lock it in place. A molecule on the surface will have 9 empty sites above it. If it gets knocked around by its neighbours, sooner or later it will be kicked into one of the empty sites and evaporate.

You want to maximize the number of water molecules exposed to empty sites. With a sufficiently wide pan (imagine one that is so big that the sap is only 1 water molecule deep) you could evaporate the water almost instantly even without external heating. The external heating will only give the flat pan a further advantage. 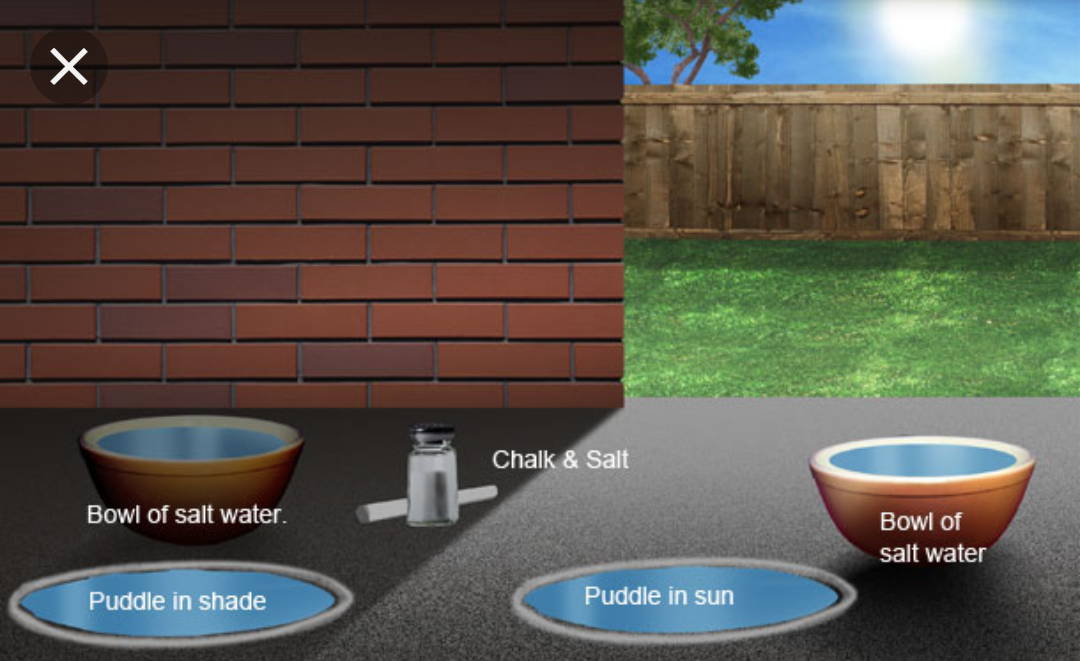 I wonder if the answer may depend on some details, as there are two (interrelated) processes: boiling and evaporation. Let us consider two extreme cases. In the first case, there is no heat supply from the burner. Obviously, the water will evaporate faster from the wide pan. In the second case, the heat supply rate is very high, so the process does not take much time, and you just need to transfer more heat to the liquid. Unless the deep pot's height is much greater than its diameter, the heat losses will be higher for the wide pan. On the other hand, the diameter of the deep pot should not be too small, otherwise part of the heat from the burner can miss it. So maybe you should just run an experiment for your typical conditions.

I can think of a few factors which could be important here:

Overall I see some reasons to expect that the wide container will be slightly better, but it seems that it would be much easier to actually test it yourself than to try and model these effects and their interactions.

Not the answer you're looking for? Browse other questions tagged thermodynamics evaporation or ask your own question.

7
Does the foam on top of boiling maple sap affect the rate of evaporation?
8
How does a maple syrup evaporator work?
28
Energy in bolognese reduction - lid on or off?
6
Acer saccharum (Sugar Maple) Sap & Freezing
0
Temperature change: boiling pasta in a lot of water or a little
3
Heat Temperature and my dinner
6
Temperature of steam rising off boiling water
1
Is more water lost when it boils in a larger pot?
0
How does boiling-point elevation due to a solute affect the steam/gas that is created when boiling?
1
Stirring the Pot: A Simple Question About Heat-Transfer