Can a single photon behave in a non-local way?

Most discussions of quantum non-locality center on entangled pairs of particles which are described by a single wave function and thus, in some way, are to be regarded as one quantum object such that a disturbance to one particle in the pair will cause an instantaneous change in the other.

I wonder if nonlocality can be extended to single particles. If we consider a photon, it might have an arbitrarily large wavelength. Radio waves in the tens-of-Hertz frequency range have wavelengths in the order of thousands of kms. Now if we assume that such a photon extends in space (in the direction of its propagation) such a huge distance as its wavelength, how should we think of its behaviour when some event occurs to it, such as absorption or reflection? Reasonably, the entire photon will change its state instantaneously even though the "front end" and "back end" of the photon may be very far apart. Is not that also a form of nonlocality?

I realise that this line of reasoning hinges on the idea that a photon can have a (more or less) defined extension in space, something that I am very unsure of.

Can a single photon behave in a non-local way?

Yes. This has been demonstrated in many experiments and is now done routinely. Here's a description of a demonstration used in a lecture setting:

The experiment uses the Mach-Zender interferometer (MZI) depicted here (this is from figure 1 in the cited paper): 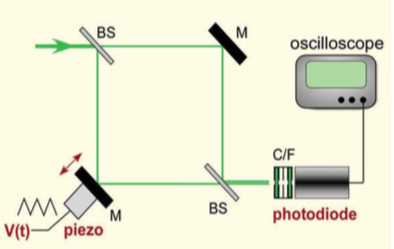 A photon enters the first beamsplitter (BS), after which it can follow either (or both!) of two paths to the next beamsplitter. The length of one of the two paths can be varied slightly using the "piezo." The detection rate at the output of the last beamsplitter depends on the difference in the two path-lengths, indicating that each photon must have taken both paths:

one may displace one of the MZI mirrors by a piezotransducer... controlled by a periodic linear voltage ramp... In this way the difference between the optical paths of the two arms of the interferometer undergoes a periodic linear change whose effect can be detected as a modulation of the light intensity recorded by a photodiode with a small entrance aperture. The interference pattern is represented via the sinusoidal variation of the photocurrent displayed by an oscilloscope.

This is essentially the same as a single-photon double-slit experiment, but with a macroscopic separation between the two paths (analogous to the "slits"):

the use of an MZI rather than a double-slit presents some methodological and didactical advantages for demonstrating quantum interference. Its spatially well-separated beams facilitate light manipulations in the two paths.

The paper also describes a variation of the experiment, in which the interference is verified by manipulating polarizations rather than path-lengths. In that context, the next excerpt says how the demonstration ensures that no more than one photon is in the interferometer at any given time (with rare exceptions):

For the single-photon experiments..., we insert strongly attenuating filters... The photomultiplier pulses are sent to an oscilloscope and to a loudspeaker so that single-photon events can be both seen and heard. ... When one of the paths of the MZI is then blocked by insertion of a large cardboard, the click rate increases in a dramatic way, thereby demonstrating that indeed each photon interferes with itself...

For the classic double-slit experiment with photons, see

If we consider a photon, it might have an arbitrarily large wavelength. Radio waves in the tens-of-Hertz frequency range have wavelengths in the order of thousands of kms. Now if we assume that such a photon extends in space (in the direction of its propagation) such a huge distance as its wavelength, how should we think of its behaviour when some event occurs to it, such as absorption or reflection? Reasonably, the entire photon will change its state instantaneously even though the "front end" and "back end" of the photon may be very far apart.

Absorption and reflection are two very different cases. When it's not being detected, as when undergoing ideal lossless reflection, a single photon behaves just like an ordinary classical wave, as illustrated mathematically in this post:

Relation between radio waves and photons generated by a classical current

The act of detecting (e.g. absorbing) the photon is where the behavior differs: detecting the photon causes it to effectively become localized. More accurately, according to quantum theory, detecting the photon causes it to become irreversibly entangled with its surroundings with respect to location, which is quantum theory's way of telling us that we might as well apply Born's rule and discard all but one of the terms in that special superposition. This picture is consistent with the experiments described above.

2
Can a photon exiting from a gravity well ever reach a frequency of zero / wavelength of $\infty$?
23
Are fermions intrinsically non-local?
19
What exactly is meant by the wavelength of a photon?
8
Don't these experiments suggest that locality has to be abandoned in the quantum realm?
4
Does a photon's wavelength (and energy) change when reflecting off a mirror?
2
Can photon frequency and photon number be measured simultaneously?
0
What is the complete set of parameters that describes a photon in free 3D space?
3
Experimental suggestions for size and shape of single optical photon (wavepacket)?
1
Why can't a single photon pass through a slit if it is perpendicularly (relative to the slit) polarized?