I may be missing some crucial observation but I'm getting stumped on this KVL proof for phasor notation.

So to prove KVL in phasor notation I'd like to start off with what we know, KVL in a real physical circuit.

So first I stated by normal KVL around a loop with time varying voltage v1,v2,v3,...,vn is zero.

Then I converted it to the sum of the real part of the complexified voltage with the same angular frequency but different phase angles.

I factored out the rotating complex vector and noticed that for all of t this term can never be zero so we can focus our attention to the remanding term.

The remanding terms are by definition in phasor notation so I substituted the appropriate variable to show that it is a phasor. 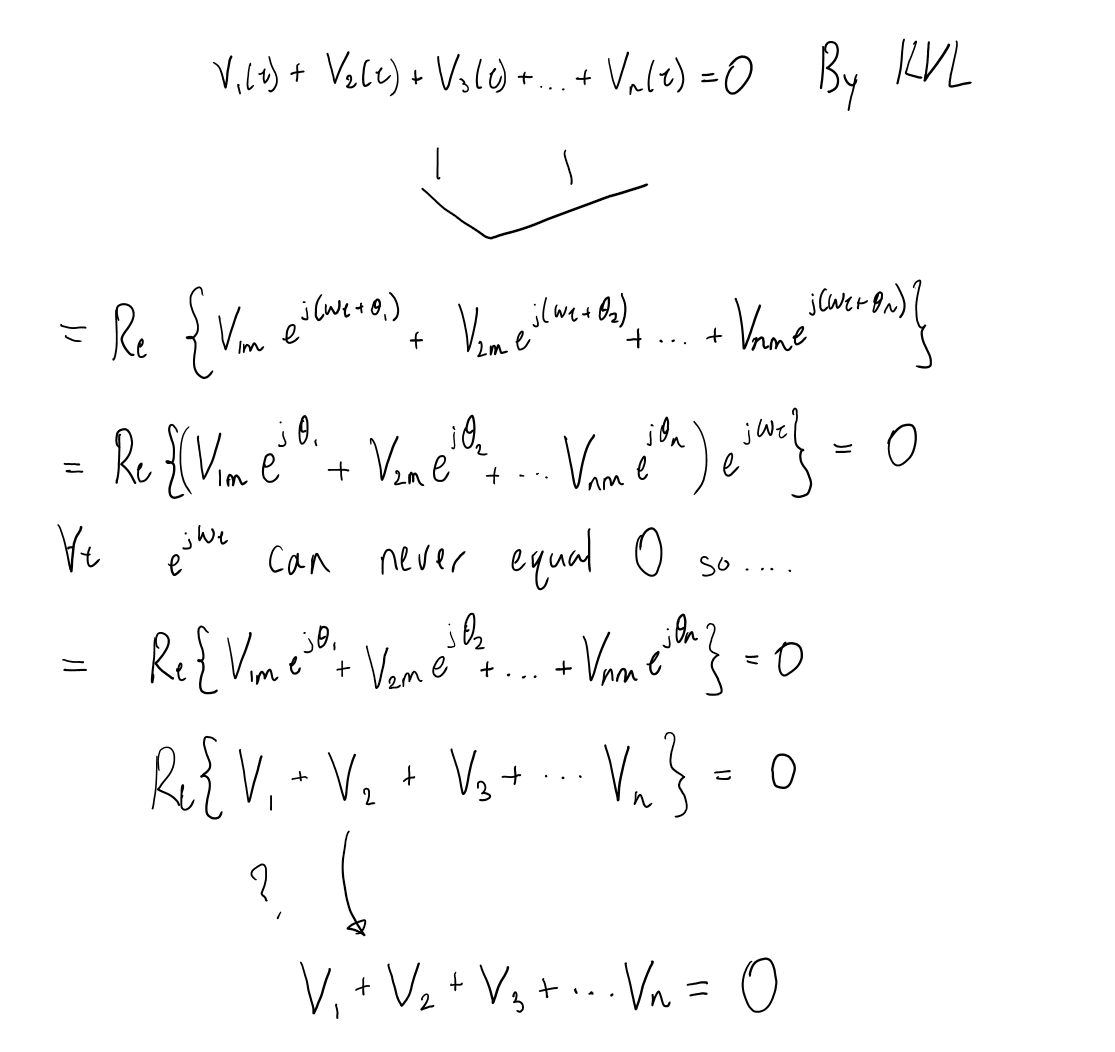 Now I don't understand why they removed the real part operator since we can have phasors that add up to having a real part that is zero but have an imaginary component that may be non zero. The real operator will discard the imaginary part satisfying our equality. (The sum of the phasor is purely imaginary so the real part is zero which satisfies our equation).

If anyone can explain what I'm missing I would very much appreciate it.

Graphically when I visualized the phasor as vectors in the complex plane I can see that the phasor vectors just has to add up to have the real component to be zero. Again the net phasor vector must be vertical/have only imaginary component.

Now I don't understand why they removed the real part operator since we can have phasors that add up to having a real part that is zero but have an imaginary component that may be non zero.

I don't believe that's correct. Consider a sinusoidal current source connected to two series connected impedances and assume AC steady state. If the source current is given by

and the impedances are

Now, consider instead the case that

and then KVL yields

and see that this encodes both of the two real cases above in which KVL holds, i.e., KVL holds for both the real and imaginary parts of the phasor voltages.

5
Traditional Kirchoff voltage law in AC circuit?
2
Kirchhoff's laws in phasor domain
0
Complex Impedance Question
13
What is the intuition behind Kramers-Kronig relations?
3
Sinusoidal currents in AC circuits
2
What's the meaning of a complex momentum in classical mechanics?
0
Why we take complex current into effect why not just the real part and similarily power formula why we use complex conjugate of current?