How do we know that gluons have no electric charge?

In particular, there seems no reason that the 6 non-diagonal gluons can't carry +-1 electric charge if we establish a cyclic quasiordering of colors and if we assume the number of gluons with positive charge are equal to those with negative charge.

Just as the total color charge of a baryon remains the same although quarks are constantly emitting and absorbing color charge via gluons, why not the same for electric charge or, in other words, isospin?

It is a brute experimental fact, already apparent within the first year or two of the discovery of the structure of nucleons, in the late 60s, at SLAC. Deeply-inelastically scattering electrons off nucleons, one could probe the charge content of the proton and the neutron, and, through Feynman's parton model, understand its kinematics.

By 1971, Feynman had convinced anybody beyond a shadow of a doubt that about 50% of the momentum of nucleons is carried by chargeless constituents, that is, neutral partons, which we now identify with vector gluons. Feynman himself held off too long in avoiding identification of the constituents with precise quarks--let alone today's QCD gluons.

In the intervening half century, DIS experiments involving electrons and also neutrinos firmed up the picture, and one now has a remarkable profile of the distribution functions of nucleon constituents. 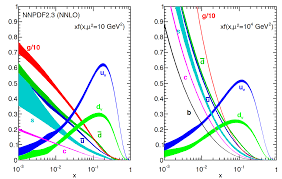 You might cook up notional models involving fantastical particles and charged vector bosons, but DIS experiments have excluded an awful lot of them to pretty good precision--apologies I do not have the PDG numbers at my fingertips.

Not the answer you're looking for? Browse other questions tagged standard-model quantum-chromodynamics quarks gluons or ask your own question.

11
Non-existence of gluon singlets: Any recent theoretical progress?
8
What is the role of the color-anticolor gluons?
5
Group theoretical reason that Gluons carry color-charge and anti-colorcharge
0
A few questions on quarks, gluons and the strong force
2
Color confinement and integer electric charge?
1
Goldstone bosons, quark and gluon masses counting in color-flavor locking QCD
22
Why are gluons believed to be massless?
3
Quark-Gluon color relationship in pure QCD
1
"Color charge" of the adjoint fermion?
4
When does a particle have an antiparticle?