Inserting an arbitrary phase in the equation for driven damped oscillations

In Classical Mechanics by Taylor, we find the solution to the differential equation of a damped oscillator with a sinusoidal driving force: $$\ddot{x} + 2\beta\dot{x} + \omega_0^2x = f_0\cos\left(\omega t\right).$$ My intuition tells me that there's a good reason for not considering the more general case, $$\ddot{x} + 2\beta\dot{x} + \omega_0^2x = f_0\cos\left(\omega t - \delta\right),$$ where the sinusoidal force has an arbitrary phase $\delta$ inserted. Something to do with redefining $t = 0$, but I don't know how to articulate it because I don't fully understand it. I'd appreciate it if someone could explain clearly why considering an arbitrary phase is superfluous or tell me that I'm wrong to think that the phase is superfluous.

If you make a change of variables, lets say $\omega t'=\omega t - \delta$ you get the same equation without the phase, and you don't lose generality. 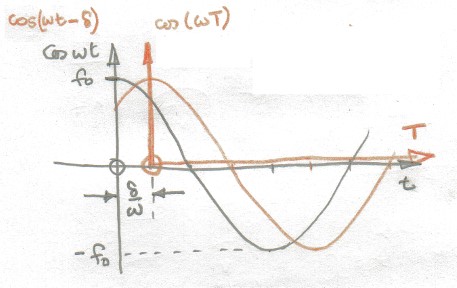 The physical reason that this is possible is that there's time translation symmetry in the original differential equation. In other words, shifting the drive by any amount in time shifts the solution by the same amount.