Net force acting on a box in this diagram

The 27-kg slider block is moving to the left with a speed of 5 m/s when it is acted upon by the forces $F_1$ and $F_2$. Neglect friction and the mass of the pulleys and cords.

But for the right portion of the box diagram where $F_1$ is acting on the object. Why is it $4F_1$ exactly? I am just trying to intuitively make sense out of the equation as opposed to just counting ropes. This may be a real simple question but please help me out.

Edit: I am not asking for a hw solution (I have access to the solution manual), I am simply asking for a deeper explanation on how tensions act as forces in this diagram to solidify my understanding.

In general, a block and tackle system allows you to move heavy weight (represented by a Force $F$) by increasing the distance $s$ that you have to cover. The work $W = F \cdot s$ always stays the same.

Check the example 1 from Wikipedia below: 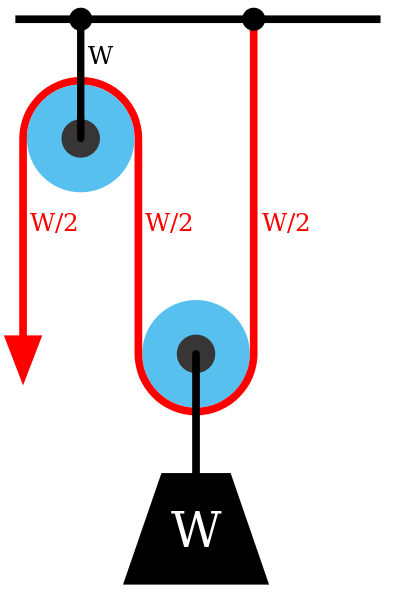 If you pull the string on the left, you move the weight up. Due to the pulley configuration however, the weight will move half the distance of what you pulled. The necessary force is also 0.5 times compared to simply lifting the weight.

Now check the example 2 from Wikipedia: 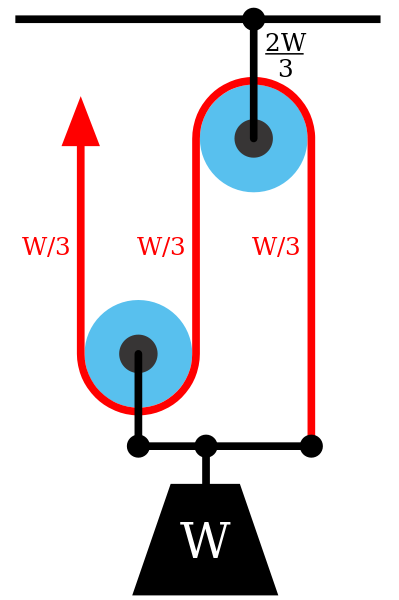 You have the same amount of ropes and the same amount of pulleys. However, they are attached in a different way: The weight is fixed at two points of the pulley system. If you do the maths, you will find that you only have to exert one third of the force and pull 3 times the distance compared to simply lifting the weight.

In simple mechanics problems like this, where the mass of the rope and the pulleys and friction on the pulleys can be neglected, then you can assume there is the same tension $T$ throughout the whole length of the rope.

126
With Newton's third law, why are things capable of moving?
1
How is Magnetic force on a current carrying conductor $Blb$
1
Forces acting on a double pulley
1
How can we account for a friction force changing sign in a conservation of energy equation?
0
Confusion about two-force members
0
Free body diagram in sliding blocks situations?
0
Net torque on an object when when all the forces pass through a common point
1
Finding net torque on an object when all forces pass through a common point by finding the net force first