Force and center of mass acceleration 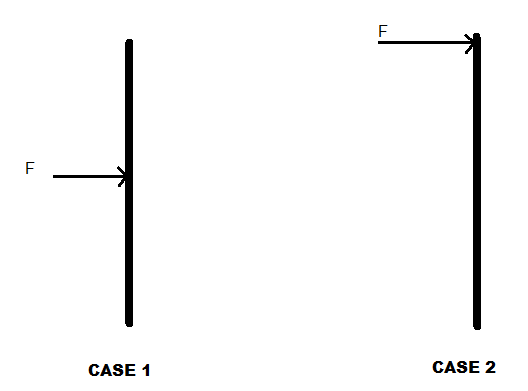 I have a rod with mass $m$. Above are two ways I can apply a perpendicular force to the rod. Since the mass of the rod is uniform, its center of mass is in the center of the rod.

Case 1: It is obvious that the acceleration of the center of mass is equal to $F/m$.

I found some questions like Force applied off center on an object, What happens when a force is not applied on the centre of the mass? and What does it mean for a force to "go through the center of mass"? but I could not find an intuitive explanation about the reason for this.

When the force is pressing the rod at the end, it causes rotation of the rod.

The rod locally acts like if it were a point-like object with the mass smaller then the mass of the rod: $m_{eff}=F/a_{end}$.

The same force $F$ causes a faster motion of the rod end, compared to the central force case, so the power $P=F.dx/dt$ is higher.

The center of mass accelerates slower then the rod end, by $a=F/m$, the same way as in the central case.

The key point is to honour all 3 fundamental conservation laws for energy, momentum and angular momentum.

Important thing to remember is, even a linearly moving object has nonzero angular momentum, if it is along a line not passing the coordinate system origin.

Can anyone explain to me in an intuitive way why that is?

It's not easy to say what you would consider intuitive and what not. I've made my guess and give an answer with no equations and with some statements I believe you could find intuitive. You'll have to pay a price, however. I'll make reference to several figures I have no time to draw and leave for you to reconstruct.

You agree that in case 1 the rod will simply accelerate with no rotation, and its com will have acceleration $F_1/m$. Your question is about what will happen in case 2.

addition of two opposite forces applied in the same place has no effect.

2) Consider the system of three forces as composed of force $F_1$ alone plus the couple formed by $F_2$ and $F_3$. I make a further assumption:

the effect on rod of several forces is the geometrical (kinematical) composition of the separate effects of each one.

3) Consider another force $F_4$ equal to $F_3$ but applied to the lower extreme of rod. I'm going to prove the following:

two forces euqal in magnitude and direction, applied in different points, have the same effect as a force of double magnitude applied in the midpoint.

This is a non trivial result: we have shown that

translating a couple to a different position (leaving unaltered all parameters: magnitude and direction of forces and relative position of application points) leaves its effect unaltered.

4) Summarizig: $(F_2,F_3)$ and $(F_1,F_4)$ are equivalent. Then applying both at the same time will have twice the effect of each couple alone. But applying both is the same as applying one couple of double arm: $(F_2,F_4)$. What will its effect be? I can appeal to symmetry to state

a couple of forces symmetrically placed wrt to com causes no motion of it, but only an angular rotation around it.

Then we may conclude that the same happens if only one of couples $(F_2,F_3)$ and $(F_1,F_4)$ exists. Both keep com undisturbed causing an angular acceleration of rod around it. A not intuitive result!

5) And now we are at the end. We have seen that $F_2$ is equivalent to $F_1$ plus couple $(F_2,F_3)$. The former causes an acceleration of com, equal to $F_1/m$. The latter (the couple) has no effect on com but causes angular acceleration around it. Then this is the effect of $F_2$ alone, we were looking for.

Not the answer you're looking for? Browse other questions tagged newtonian-mechanics forces classical-mechanics mass acceleration or ask your own question.

5
Force applied off center on an object
1
Will there be translation + rotational motion?
2
What happens when a force is not applied on the centre of the mass?
-1
What does it mean for a force to “go through the center of mass”?

1
What point of application of force ensures more acceleration in a rod?
4
Acceleration of Center of Mass in Rotational Motion
0
Defining origin when calculating center of mass
4
Would a force not cause acceleration $a=\frac{F}{m}$ if part of it is used to cause rotation?
0
Acceleration of The Centre of Mass of A Rod
1
Is the angular acceleration of a rigid body independent of the reference point?