Imagine I have two current-carrying wires with the current going in the same direction. The magnetic field looks like the sketch below on the left:

Now imagine I squish the wires very close together but not touching. Then, I can draw an amperian loop between both wires, which does not enclose either wire, where the integral $\oint \vec{B}\cdot\vec{dL} \neq 0, \rightarrow I_{encl}\neq 0$ , because the 'vertical' bit is elongated while the 'horizantal' bit is foreshortened, so my amperian loop looks like an oval, with lots of overlap with B fields circulating with the loop and less overlap with B fields anti-circulating with the loop.

That means there is an extra current which appears between the two wires!

It has to be hand waving but hopefully you will see that your concentration on just the top and bottom of your oval Amperian loop has missed out the contributions due to the "middle" part of the loop.

I have reproduced your left-hand diagram, included two extra magnetic field lines and added an Amperian loop $ABCDA$ which is shown in green. 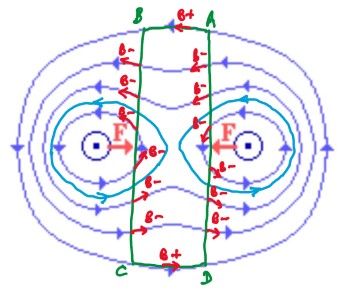 I have added labels in red to show the local direction of the magnetic field $B$ where there are positive $(+)$ and negative $(-)$ contributions to the line integral $\int \vec B \cdot d\vec L$ when moving anticlockwise around the loop.
I have confidence that if I could do such an integration over the whole loop the result would be zero and that Ampere's law is still valid in such a situation!

4
Vector potential
1
In terms of the Ampere-Maxwell law, why is $\vec {E}=0$ in a wire of a capacitor circuit?
3
Ampère's law applied on a "short" current-carrying wire
6
Current geometry and Ampere's law
1
Trying to visually understand Ampere's Law
1
Magnetic Field Energy Increase while magnetic field does work on a current carrying loop - Where does the energy come from?
0
Why are small planar current loops of sufficiently small size interesting? (magnetic moments)
9
I don't understand Ampere's circuital law
3
Using Faraday's law twice
3
Why isn’t magnetic field at the centre of a circular current-carrying loop zero?