For the case of a stationary loop, and a changing magnetic field producing a non-conservative electric field $E_{nc}$:

If the induced emf (${\Large{\varepsilon}}$) is due to both the change in magnetic field strength, and spatial change(due the magnetic field source's motion) an equation to model the sum of two effects is:

They seem to be the same mathematically, however, two different causes of effect. 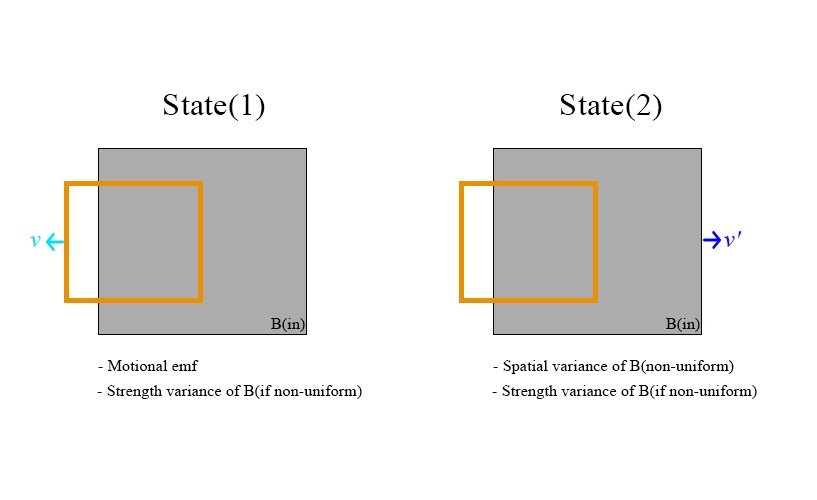 Okay, now I understand your question.

The answer is simple: of course both situations yield the same result, and the same formula.

Then you say that they are different phenomena. Well, I say they are not. Because what matters here is relative motion; that is, the movement of the field with respect to the loop. It is not about "absolute motion with respect to a certain fixed point", but rather, it is about relative displacement between two elements.

Let's go to the simple case: suppose that $\vec{B}$ is uniform on its region and it doesn't change in time. Then, the only contribution is due to the change in $S$.

The formula $\Phi_B=B\cdot S$ can only be applied in some easy geometries like these. The general formula is $\Phi_B=\iint \vec{B}\cdot d\vec{S}$, but, as we are considering that $B$ is constant, and the angle between both vectors is constant (and also $0º$), we can say that $\Phi_B=B\cdot S$.

But $S$ is the surface of the loop exposed to the magnetic field.

And this is another example of the relativity principle. Explained easily: imagine you're travelling by train, on a perfectly straight way, and with extremely accurately constant velocity. Now you look through the window. You deduce you're moving, because the landscape is variating.

However, how do you know that you're moving forward? It could be the landscape moving backwards! Of course you know the train moves, because you've been taught so. But if no one had told you... if you had been born in the train... you couldn't tell.

This is the same. The loop doesn't know if the loop itself is moving, or if the whole rest of the universe (magnetic field included) is moving backwards.

Fortunately, the loop doesn't care. The physical laws are the same in both considerations.

What's more, you can go further. The loop is moving with respect to you. However, if you moved with the loop, you'd be seeing the magnetic field moving and not the loop.

Well, in fact it is, you just obtained it.

PS: calling it "motional emf" is not very useful, in my view. It's just "emf".

Assuming you have a loop, with the area $S = W \cdot L$, like in an dc motor, and $L$ keeps constant, then the term

where $v$ is the velocity.