Suppose we have a ball of volume V and a block of the same volume V whith same density. We submerge the ball into some kind of liquid so that $\frac{1}{2}V$ is submerged into the liquid. We do the same thing with the block. Now $\frac{1}{2}V$ of both block and ball is submerged into the liquid. At this moment we can say that the buoyant force on both objects is the same. If we now push both the ball and the block by little bit into the liquid by the same volume, the force acting on the bottom of the ball would increase (because it is now a little deeper in the liquid) and so will the force acting on the bottom of the block. If we now look at the geometry of the objects, wouldn't there be additional force on the ball pushing it downward because of the curvature of the ball which wouldn't appear on the block? Can we still say the buoyant force is the same on both objects? I added a picture and highlighted the area where I think the force would act in red. 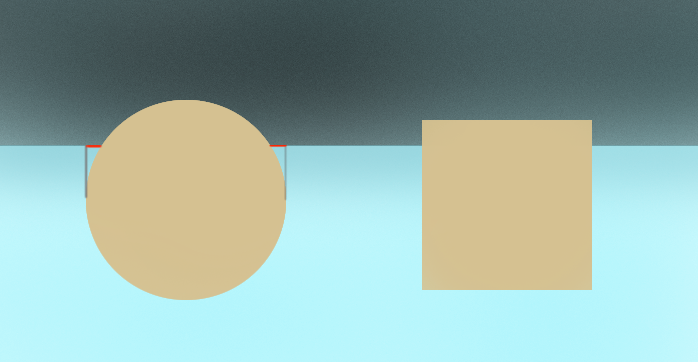 We can prove this by using Archimedes Principle, which states that the force of buoyancy is equal to the weight of fluid displaced by an object. Here, both the sphere and cube displace the same amount of liquid and hence will have same force of buoyancy acting on it.

This diagram might help you understand what is going on? 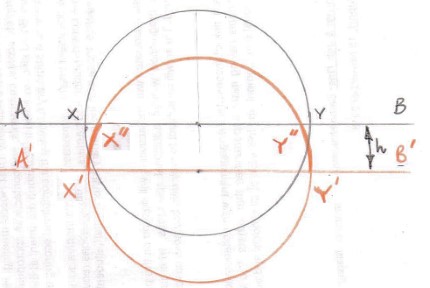 The pressure on all parts of the sphere below $XY$ increases by $h\rho g$ when in the new position $X'Y'$ and those parts all contribute to an increase in the net force upwards.

The section of the sphere $X''Y''Y'X'$ which was originally in the air is now in the liquid with the change in pressure on that surface ranging from $0$ along $X''Y''$ to $h\rho g$ along $X'Y'$ and the surface area which has become immersed is much less than the surface area already in the liquid.
This newly submerged part of the sphere thus contributed a net downward force which is less than the increase in the upward force contributed by the permanently submerged part of the sphere.

Not the answer you're looking for? Browse other questions tagged forces pressure fluid-statics buoyancy or ask your own question.

6
What is the basic reason behind buoyancy?
16
Why do we need to apply more force to push a submerged object deeper?
1
Changes in force required to push buoyant object under liquid/water
0
Wouldn't buoyant force be the same for the two bodies?
1
A basic question of positive buoyancy,
1
Change of buoyant force as object moves deeper
0
Problem Regarding Buoyancy