Assume the Earth to be a uniform sphere of mass M and radius R. Also let the Earth be stationary initially. Assume further that there is all other stellar bodies are very far away so as to have no influence in this problem.

My attempt at the solution:

Since the Earth-ball system is isolated, its energy would be conserved. Let the initial speed of the ball be $v_0$ and the final speed be $v_f$. We'll have the following equation:

Next, we know that when the ball will finally be in circular orbit, the gravitational force will be providing the necessary centripetal acceleration for it to maintain circular motion, which gives us the following equation:

Besides, since gravity is a central force, the angular momentum of the ball about the center of the Earth will remain conserved, which yields the following equation:

That completes setting up three equations for three variables $- v_0, v_f, \theta $. Solving them, we would obtain the following values for each:

However, it is observed that for $\theta$, the argument of $\sin^{-1}$ is always greater than or equal to one, being one only if $h$ is zero. The proof may be carried out by initially assuming that the argument of $\sin^{-1}$ is less than or equal to one for $h$ greater than or equal to $0$, and solving the inequality will yield that $h$ must be less than or equal to zero. So the only acceptable solution is for $h$ to be zero. This just winds up being the case of throwing the ball with sufficient speed tangentially on the surface of Earth so that it keeps orbiting on the Earth's surface itself. Thus, there is no possible way to just throw a ball so that it ends up in a circular orbit of certain desired radius.

The problem is that I don't see any physical intuition for why this should be true; either that or I am doing something wrong. Any guidance or help would be greatly appreciated!

This problem has one solution. h=0. Throw the ball horizontally at orbital velocity for your altitude.

(Incidentally, every ball you throw enters an elliptical orbit like this, but it typically intersects the ground before it gets interesting)

Since all orbits must pass through the thrower, there is only one circular orbit which can be attained, which is the orbit at the height of the thrower. There are several elliptical ones which will leave the atmosphere before coming around to smack you in the back of the head (ignoring air resistance).

If there is no air resistance, the orbit will always pass through the initial point, so the ball cannot have a circular orbit at a height $h\neq 0$.

Great question! :) First of all, your analysis is perfectly correct, or, in other words, you have already proved that an object cannot be thrown from the surface of the earth so as for it to perform the motion in a circular orbit around the earth in a radius larger (or smaller) than the radius of the earth. Also, unlike what you seem to think, it wouldn't be possible to make the argument of the arcsin appropriate with an $h<R$. The expression that goes into the argument of the arcsin is always greater than one except for at $h=R$. This is illustrated in the graph below. 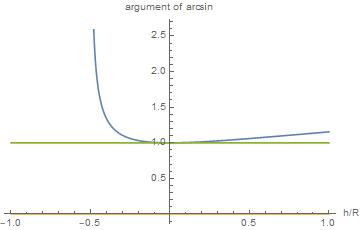 The way to absorb this result might be along these lines (as expressed in other answers as well): Given an initial position and velocity, the path of a projectile is already determined under a central gravitational influence. Practically, this path might be interrupted when the path intersects with the surface of the earth, but as long as the object is in a free-fall, it remains on this specific path. Now, there are only a few options for this path: it can either be an ellipse, a circle, a parabola, or a hyperbola. The latter two categories don't apply to bound states. So, for a bound state, the path of a projectile can only be an ellipse or a circle. Thus, if you start out as a projectile whose path (by the virtue of the initial conditions that you start out with) is an ellipse then at no point in future can it suddenly become a circle--it will remain ellipse. Thus, if you want to perform a circular motion around the earth then you need to start out with initial conditions that match the circular trajectory which very much includes the initial point that you start out with. In other words, you can only perform a circular motion in a circular orbit that passes through the point from which your motion starts--and this is precisely what you proved.

Not the answer you're looking for? Browse other questions tagged newtonian-mechanics classical-mechanics gravity conservation-laws or ask your own question.

0
Throwing something into orbit

4
Calculating the period of a quasi-circular orbit
3
Calculating projectile range from known maximum height and time traveled
0
Turning point of ball, when throwing it into the atmosphere
3
If a stationary ball of neutrinos were released at the equator, what orbit would it take?
2
Conservation of energy with friction on a pool ball
1
What happens to the momentum of earth-ball system when a ball is thrown upwards?
1
Deviations from purely circular orbit for an object in a Yukawa potential