Understanding the potential difference of a wire

I'm trying to understand the fundamentals of potential difference in circuits.

My understandings (from textbook and stackExchange):

First off, are any of my understandings incorrect?
Secondly, what is the $\Delta V$ from one end of the wire to the middle if not zero? $\frac{\Delta V_{battery}}{2}$?
Finally, if both the third and fourth bullets are true, how?

First of all I agree with the answer given by @The Photon. I would just like to expand upon the last two bullets.

As @The Photon said, yes but it is not necessarily the same as before you connected the battery. The reason why is a real battery always has internal. When current flows there is a voltage drop across this resistance which reduce the voltage at the terminals

The diagrams below show a battery inside the dotted rectangle. The internal resistance of the battery is shown as $r_b$. The voltage generated within the battery is sometimes referred to as its emf (electromotive force). It is an old term and isn’t really a force but is simply the voltage that the battery produces at its terminals when no current is delivered to the load, i.e., with the switch open, as shown in the top diagram. This is referred to as the open circuit, or no load terminal voltage of the battery. This is the maximum terminal voltage the battery can have and decreases with usage over time.

The ΔV across any two points on a wire is zero or close to zero, even if there is current flowing through it?

Correct as @The Photon said. But it can never actually be zero since wires will always have some resistance which depends on the resistivity of the wire material, the size (cross sectional area) of the wire, and its length.

For example, let’s say we have a AA battery with an emf of 1.5 volts and an internal resistance of 0.2 Ohm. A one-foot piece of 12 AWG copper wire is connected across the terminals. Such a wire would have a very low resistance of about 0.0025 Ohm. The instantaneous current flow will be

If instead we connected a one foot piece of 24 AWG copper wire which has a resistance of 0.0257 Ohm, then applying the equations will give a voltage across the wire of) of 0.17 volts which is 11.3% of the battery emf. 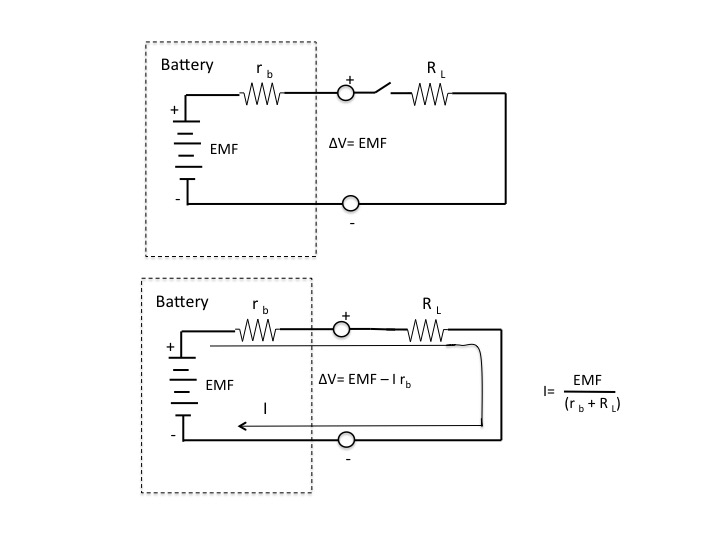 Potential difference is created by a separation of charges.

A battery separates charges and creates a potential difference between its terminals.

Yes, but it's not necessarily the same $\Delta V$ that there was before you connected the battery.

The ΔV across any two points on a wire is zero or close to zero, even if there is current flowing through it?

Correct. Ohm's law applies: $V=IR$, and the value of $R$ is very small for most of the materials that we use to make wires.

Yes, but again the potential difference produced by the battery with the wire connected is not the same as what it produces with no wire connected.

if both the third and fourth bullets are true, how?

Not the answer you're looking for? Browse other questions tagged electricity electric-circuits voltage or ask your own question.