I am trying to understand what bulk modulus is, but it is quite hard for me to understand it. I get that it is the resistance of material to compression from all directions, but what actually happens when a material surpasses its limits in terms of bulk modulus? From what I read in the wiki article about bulk modulus,

"A material with a bulk modulus of 35 GPa loses one percent of its volume when subjected to an external pressure of 0.35 GPa".

So what will happen to a material like steel with bulk modulus of 160 GPa when it reaches pressure of 160 GPa and above?

Hydrostatic pressure, as part of the definition of the bulk modulus $K$ (in conjunction with the relative decrease in volume) is an interesting flavor of loading because it doesn't seem to cause materials to fail—at least not in the familiar ways.

Uniform pressure alone can certainly induce a phase change (from a gas to condensed matter, for example, or one solid crystal structure to another). However, uniform compressive stress isn't reported to activate the familiar ductile or brittle mechanisms of failure. That is, hydrostatic stress doesn't cause uniform materials to come apart from plastic flow or crack propagation.

(As an example, consider that submarine hulls don’t fail because any specific material element is subjected to hydrostatic pressure. A depth of 2000 m—well beyond the working depth of submarines—would cause a cubic centimeter of steel to compress by only 0.5 μm on a side. Ultimately, submarines driven past their critical depth fail because their hull material isn’t subjected to hydrostatic pressure: the pressure on the outside is much larger than the pressure on the inside, and both are far less than the in-hull longitudinal and hoop stresses. These differences produce a deviatoric stress state that induces failure.)

But when working with the bulk modulus, we run into problems if we integrate the common definition,

while assuming constant $V$ to obtain, as you describe,

For pressure values comparable to or larger than $K$, surely we can't have the volumetric compression approach or exceed the original volume $V_0$ of the material, right? A object's volume can't go to zero or less than zero. First, a more accurate integration, to accommodate large changes in $V$, gives

More importantly, let's consider how the material property $K$ might change with increasing compression. Here, it's useful to look at the origin of the elastic moduli, which can be associated with the curvature of the pair potential between molecules (the classic example being the Lennard-Jones potential): 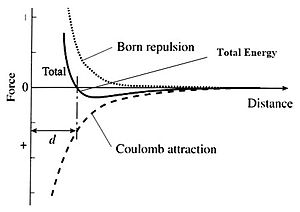 This schematic represents the equilibrium intermolecular distance (at constant pressure!) in condensed matter, which corresponds to an energy minimum, a happy medium between electrostatic attraction and the repulsive forces required to maintain the exclusion principle. A lower dip and higher curvature at the minimum is associated with a higher stiffness (and also a higher melting temperature, as it happens).

For fairly low amounts of hydrostatic pressure (at the bottom of the ocean, for example), the position and curvature of the pair potential doesn't change by much. However, with increasing pressure, the curve shifts to the left, which increases the asymmetry and requires the curvature to increase. This increase translates to an increasing bulk modulus—a reminder that $K$ should be thought of in this context as $K(P)$, a function of the pressure.

This area of research is active both theoretically and experimentally. Shown below, for example, is the relative volume and bulk modulus of cobalt oxide as predicted by molecular dynamics simulation and experimental measurement:

For this material, a phase change occurs at a pressure of several GPa. Within each phase, however, the bulk modulus smoothly and monotonically increases with increasing applied pressure. Note also how the relative change in volume continually decreases.

Interestingly, such pressures don't seem to cause any permanent damage in general. Following simple compression of the bonds and release, the material re-expands to its original dimensions. For this reason, material failure criteria generally predict a "zone of safety" around configurations of hydrostatic stress. For the von Mises criterion, for example, this zone appears as a cylinder around $-\sigma_1=-\sigma_2=-\sigma_3=P$: 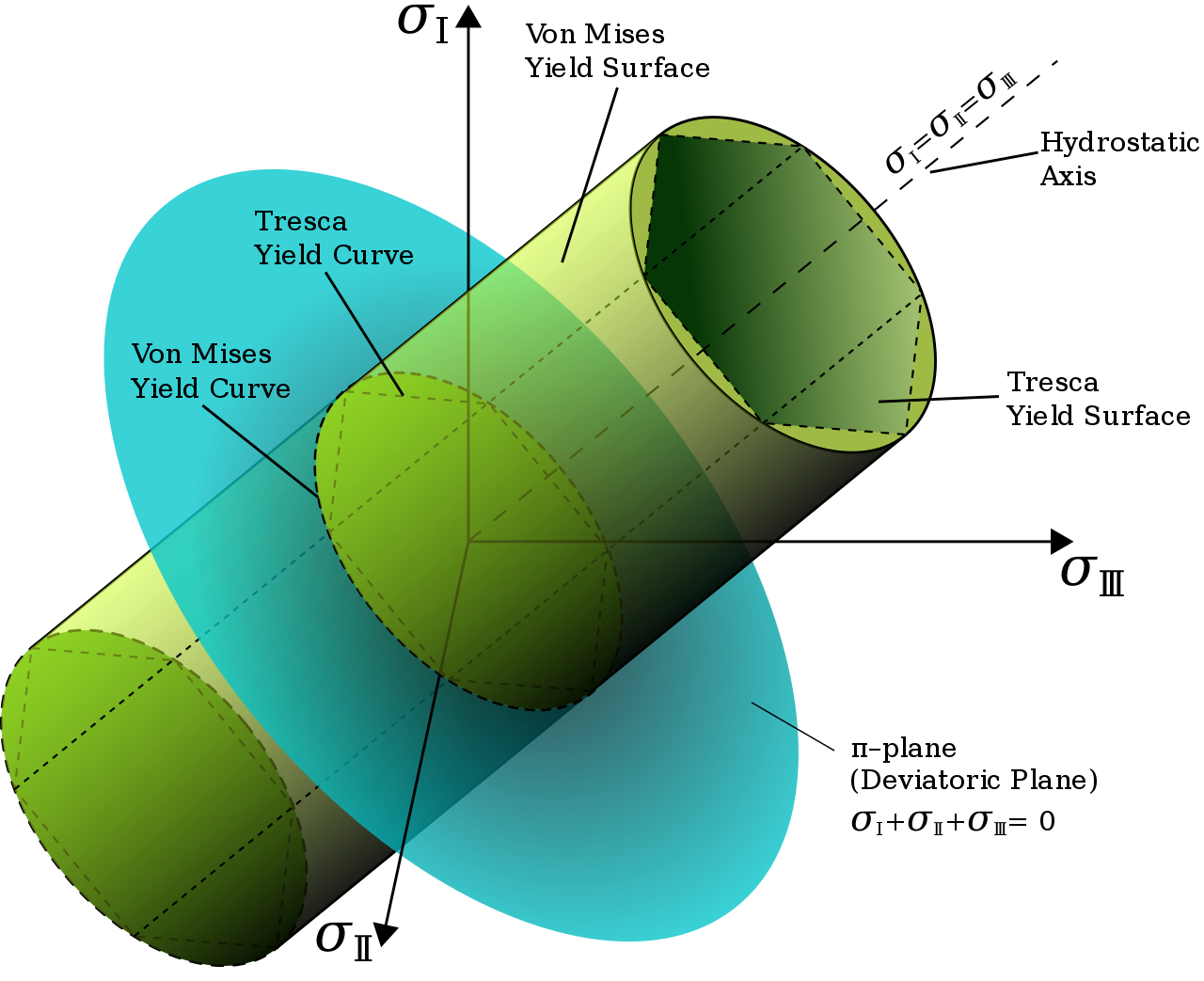 Just to give a sense of the longstanding consensus behind this result, note that a great pioneer in high-pressure materials testing, P.W. Bridgman, wrote in 1912:

The first criterion, as originally stated [namely, that a suitably high stress of any type leads to failure], evidently cannot hold without modification, for it demands that a solid body when subjected to uniform hydrostatic pressure all over should break when the pressure rises too high. It is inconceivable in this case how the body can break, and the existence of the heavenly bodies with enormous internal pressures is conclusive proof to the contrary...But it can be stated unqualifiedly from the present work [involving pressures on the order of 3 GPa] that, on the contrary, substances tend to become more rigid under high pressures... The first criterion is usually modified, therefore, so as to predict rupture when the tension alone, instead of either tension or compression, exceeds anywhere a critical value. [my emphasis]

A look at subsequent literature reports (e.g., Bridgman, P. W. "The effect of hydrostatic pressure on the fracture of brittle substances." Journal of Applied Physics 18.2 (1947): 246-258; Lewandowski, John J., and P. Lowhaphandu. "Effects of hydrostatic pressure on mechanical behaviour and deformation processing of materials." International Materials Reviews 43.4 (1998): 145-187; Wilson, Christopher D. "A critical reexamination of classical metal plasticity." Journal of Applied Mechanics 69.1 (2002): 63-68) confirms that researchers have found that it's always necessary to superpose tensile, compressive, or torsional loading on top of a hydrostatic stress state to achieve failure.

(As another side note, as explored in a subset of this high-pressure research, very high pressures are predicted to turn all materials into metals, often explained using a band diagram as affected by the interatomic spacing: 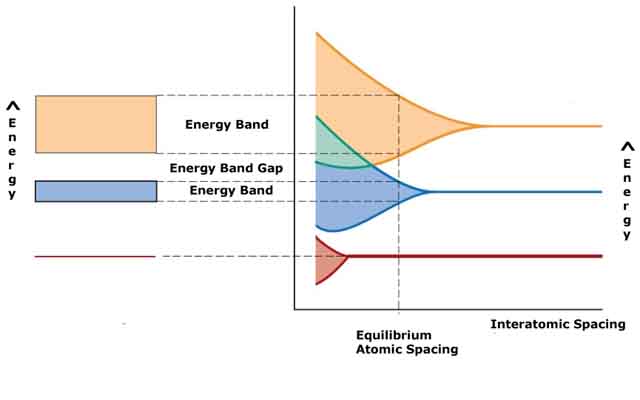 Here, Pauli exclusion forces the energy levels of even the most closely held inner electrons to spread into bands at sufficiently high compression, resulting in band overlap, electron delocalization, and consequently electrical conduction. And extraordinarily high pressures ultimately cause normal matter to break down (as in neutron star formation) or to form a black hole, of course.)

As far as we know, we can avoid material damage (barring the onset of phase changes or material degeneracy or black hole formation) by applying hydrostatic pressure, even as the bulk modulus increases. That is, for familiar conditions on Earth, there is no material "limit" in terms of the bulk modulus—we just encounter increasing resistance.

As an example: the bulk modulus of an ideal gas is just its pressure (because $pV$ is constant at constant temperature). So the pressure goes up when the gas is compressed.

This also happens with liquids and solids. But the compressibility is much lower, the bulk modulus higher. And compression is not linear: the modulus usually increases much more steeply than in a gas when substances are compressed.

Not the answer you're looking for? Browse other questions tagged pressure material-science or ask your own question.

3
Acoustic Metamaterials: Negative Bulk Modulus?
3
What do tensile strength values mean and why are they reported in units of pressure?
0
Bulk modulus of supercrtical air
4
Far future: how long will engraved stainless steel tablets last? And why?