When two equal and opposite forces act on a body at rest or in motion we say it is rest or in its state of motion. But when a body kept on a table starts moving uniformly due to a force applied, it overcomes force of friction.Does it really overcome the force of friction or is just equal to it. ie for force F = ū.N if it's so then why would it start to move,why not stationary as the two forces balanced?

The frictional force acting on the object when at rest is $\le \mu R$ where $\mu$ is the coefficient of friction between the two surfaces and R is the normal or contact force experienced by the object. Note that $\le$ means that friction is not always equal to $\mu R$ rather this is the maximum value that friction can take. Friction will oppose the applied force up until the applied force becomes greater that $\mu R$ at which point it will be unable to increase and there will be a resultant force causing the object to accelerate (start moving). 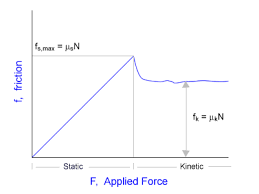 TLDR; Yes the applied force must be greater than $\mu R$ for the object to move.

On the other hand, if you reduce your force so as to equal the kinetic friction force, the net force will be zero and now the object will continue at constant velocity, the velocity it had just before you reduced your force.

The diagram in @Cal answer below shows how the friction force drops from static to kinetic. It is based on a diagram on the Hyperphysics web site.

It overcomes the force of static friction. Which is why it starts moving.

Soon after that, it is set equal to the kinetic friction. Which is why is isn't accelerating. Remember that motion doesn't require force. Only changes in motion do. An object "moving uniformly due to a force applied" has a net force of zero.

It's just that the scenario "when a body kept on a table starts moving uniformly due to a force applied, it overcomes force of friction" is a bit nastier than the simple sentence would lead us to believe. It makes us think of an object which (i) immediately starts moving, and (ii) keeps a constant speed. Well, it would have to accelerate first. So the event that most closely resembles the scenario expressed in the sentence, but yet physically sound, is the one @harshit54 alluded to: The force would have to be somewhat larger than the maximum static friction to initiate motion. Then the object will accelerate to the speed in question (during which time the force may be reduced, since the force of friction will reduce due to typical kinetic friction coefficients being smaller, but that's not crucial, I think). Then once the speed is at that value, the force would need to equal the force of kinetic friction from then on.

0
If two bodies move opposite to each other when brought in contact, what is the direction of force of friction?
1
Kinetic friction with no force on an object
0
Friction, Dynamics question
0
If we don't apply force to a body and the friction is zero will the body move?
2
Can the work by static friction on an object be negative?
1
Why does Friction not accelerate the body in this case?
2
Doubt about friction force