Tidal force on far side

I have a question about tidal forces on the far side of a body experiencing gravitational attraction from another body.

Note that I did not mention the direction of the force at that second point. It seems that the centers of mass being all on one side of that point, the force should point towards the center of $A$ on the line $AB$. However, the tidal bulge on this "far side" suggests that some force (?) is pulling on matter away from the center $A$.

How can we explain this tidal bulge on the far side? - I am specifically interested in a clear derivation using classical mechanics.

It has to do with the fact that the entire earth is in an accelerating reference from due to the attraction from the moon.

Imagine 3 points on a line out from the moon. $N$ is the oceans near the moon, $C$ is the center of the earth, and $F$ is the far oceans. The attraction falls off with distance so the forces $F_N > F_C > F_F$ as you know. Also, all the forces are directed towards the body $A$ as you know.

Since the oceans are not rigidly attached to the earth, these points all can move independently to some degree. Due to the high force, $N$ will get pulled towards $A$ by a large amount. $C$ will get pulled a little. While $F$ will barely get pulled at all. What's important is that due to the different amounts they move, the distances between the three points have increased. $N$ and $C$ are farther apart than they were before, and $C$ and $F$ are farther apart too.

The easiest way to understand this is to represent the moon's gravitational field in the vicinity of the earth as a "multipole expansion". The field lines of the moon converge radially towards the moon. You can represent this as the superposition of a constant field (parallel field lines) and a distortional component called the "quadropole field". The constant field has no effect on the tides, which are completely caused by the quadrupole field. I explain it in this blogpost: 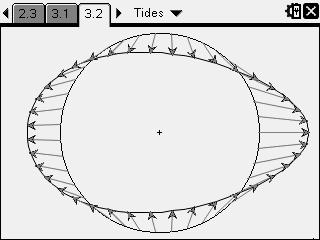 The attracting body is on the right (not shown). The arrows represent the acceleration vectors at each point on a spherical surface. These tidal accelerations cause two bulges with a ring of low tide separating them. The tidal bulges are not symmetric. It is assumed that the body and the ocean are of the same density. Due to the difficulty of calculating the effects of self gravitation this diagram is only an approximation, it is also exaggerated for effect.

The case of a spherical rigid body covered with an ocean of negligible density is more amenable to calculation. The surface of the ocean is simply the equipotential surface of two point masses. In the limit of a zero density ocean, these diagrams are exact.

When the two masses are being held apart at fixed difference: 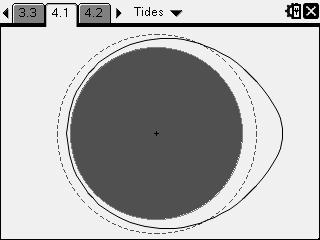 This dashed circle is the undisturbed spherical ocean level. The solid line is the ocean level (equipotential surface) in the proximity of the attracting mass.

When the two bodies are in free fall: 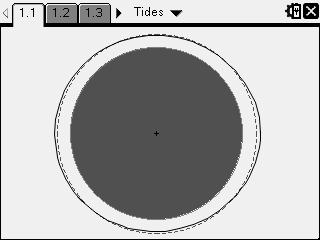 To reproduce this graph:

Guess an initial value for the potential of the distorted surface $U$. Use a solver to calculate the surface height $y$ in terms of $x$ $(y=f(x,U))$. Then integrate this equation to find the volume enclosed by the equipotential surface ($ \pi \int_{x_\mathrm{min}}^{x_\mathrm{max}} f(x,U)^2 dx $. Adjust value of the potential and iterate until the distorted volume is equal to the original volume. Finally, convert the function $y=f(x,U)$ to polar coordinates ($ r = g(\theta,U) )$ and graph.

Not the answer you're looking for? Browse other questions tagged newtonian-mechanics gravity astronomy forces tidal-effect or ask your own question.

4
Curvature of spacetime in only required to explain tidal forces?
6
Tidal force when planets and smaller objects collide
0
Is the fraction of radioactive isotopes on the near side of the moon higher than on the far side?
2
How are tidal gravity and curvature related?
7
Relative size of the 2 tidal bulges
3
Why does a tidal bulge result in a net torque on the Moon?
1
Definition of “tidal forces”
0
Standard explanation of tidal forces
0
Tidal forces between Moon and Earth