What is energy band gap?

There's actually a complete theory regarding the study of the energy band game using quantum mechanics in semiconductors. However, I'll give you a brief introduction and some resources from where you can work on.

As you know, the components responsible of electric current in a material are the electrons, which are located in specific bands of the atoms. In a very simplified manner, the electrons that are closer to the nucleus cannot participate in the conduction of electricity as they're bound to their atoms, while the electrons far away are free to "roam" between one atom to another, creating a sort of "electron sea" that allows them to bind the atoms together yet travel through the material. The first electrons are said to belong to the valence band, while the farther electrons belong to the conduction band.

But why is that some materials require more energy to start conducting electricity than others? This is explained through what we call the energy band gap, that is, the difference between the top level of the valence band and the bottom level of the conduction band. As you can see in the image, if the bands overlap, the electrons will easily jump to the valence band, and thus we're speaking about a conductor. If the gap between the bands is too broad, the electrons won't be able to jump to the conduction band (unless a very high voltage is applied) and we talk about an insulator. The intermediate case is called a semiconductor, and it has very important applications in electronics as we can actually "control" whether it will behave as a conductor or as a insulator, depending on the voltage we apply to it. 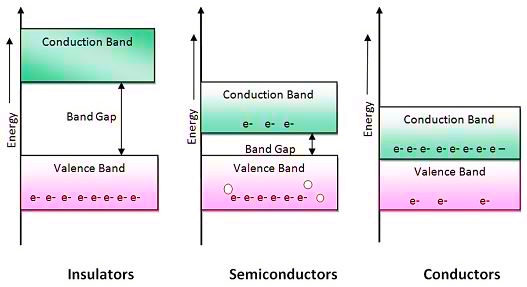 If you have taken courses on QM and EM then I recommend you to check the following links to read more about the mathematics involving semiconductors and energy band gap theory:

Not the answer you're looking for? Browse other questions tagged energy electrons electrical-engineering graphene or ask your own question.

2
Is there a relation between the mass gap in quantum field theory and the band gap in condensed matter?
1
Photon interactions with photovoltaic cells
1
Band structure effects on heat capacity
0
Band gap vs QM energy level gap between electron orbitals
0
What are precisley energy band extremes?
1
Effective mass as a consequence of energy band structure
1
Can electrons transition within energy bands, or must they transition from one band to another?