What causes the back of a bike to lift when the front brake is applied?

What causes the back of a bike to lift when the front brake is applied? (Like in an endo.)

Also, if I were to replicate this effect with a wood block with wheels that crashes against a wall (only the wheels touch the wall) would it work?

If we disregard wind resistance, there are three points where external forces apply to the combined bike/rider body: The front and rear wheel contact points with the road, and the combined center of mass. If these forces generate a torque that is not zero, the rear wheel will lift off while braking (or the front wheel lift off during hard acceleration).

Some time ago, I have hacked together an interactive web page showing the forces to a braking/accelerating trike/bike on different slopes. Playing with that page might help you understand (requires SVG+CSS+Javascript).

Applying the brakes makes the wheel stop turning in relation to the bicycle's frame but not in relation to the road. The bike's center of mass (especially with a rider pressing against the handle bars) is higher than the hub of the front wheel.

Since the center of mass is higher on the bike - when it goes forward the bike pivots around the point where the front wheel sticks to the road.

Imagine attaching a string to the middle of the wooden block and pulling it forward, while having the front wheel stuck to the ground.

There is simplified "cheat" method for thinking about this.

The hard way is to draw a free-body diagram of the bicycle, in which all the forces acting on it are made plain: the force of gravity acting through its center of mass, the force of friction from braking, and so on.

The cheat method is to visualize the bicycle in an accelerating frame of reference, and then to pretend that the acceleration is just a form of gravity. Under Newtonian physics, acceleration is not distinguishable from gravity.

For instance if you are standing on a train which accelerates, then you simply tilt forward, as if you were standing on a slope. It feels exactly as if gravity has increased and slanted.

So the reason the rear wheel lifts is because, since you are decelerating, it is as if you are cycling down a steep slope (on a planet where gravity is a little big greater than that of Earth, but that is irrelevant). If you're on a slope facing downhill, your bike is tilted forward, so that its center of gravity is shifted so that it is more above the front wheel, rather than the rear.

If the tilt is sufficiently pronounced, your center of gravity will move ahead of the front wheel, and at that point, the rear wheel will lift. 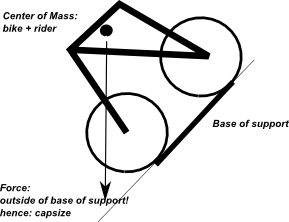 While that force still acts through the base of support, the rear wheel will not lift. However, there is also the question of how much support comes from the rear versus the front wheel. Even before the rear wheel lifts, "weight transfer" takes place to the front wheel. The bike and rider are supported more by the front than the rear wheel, because the imaginary force acting through the center of mass intersects the imaginary support base closer to the front wheel than to the rear wheel. This weight distribution toward the front limits the effectiveness of brakes on the rear wheel, since brakes can only work to the extent that the wheel can develop friction against the road. Also, it means that you can never brake so hard using the rear brake alone that the bike will tilt. As soon as it is close to the verge of tilting, the braking power is lost: an example of stabilizing negative feedback.

My naive argument would be based on energy conservation. I won't write any equations. This is for you to do.

The bike + rider has both rotational and translational kinetic energy in addition to the potential energy of the system. When you apply the brakes, the translational KE is converted to both rotational KE and PE which manifests as work done against gravity. You lift up, pivoting about a point, which accounts for a change in rotational motion due to an external torque (friction).

A very interesting real world experiment which I do every day (I bike to work) is to stand up if I wish to brake efficiently (in my case it is only marginally efficient, but I do feel the difference). The translational KE is converted to PE and hence the brakes don't have to work as hard to stop my motion. The heavier the person, the more effective the technique.

So, if you are a fat bastard, this may be a useful way to stop quickly.

Not the answer you're looking for? Browse other questions tagged rotational-dynamics newtonian-mechanics or ask your own question.

39
Why do bikes hardly ever skid while braking with the front wheel?

17
Does leaning (banking) help cause turning on a bicycle?
1
If a cart hits a wall, does the weight of it affect how it moves, when the center of gravity is constant?
3
How does a wheelie work?
2
Does stopping the same bike and rider at the same velocity with the front brake require less energy than the back brake?
4
Does having the engine pushing at the rear of a steep railway have any mechanical advantage over an engine pulling from the front?
39
Why do bikes hardly ever skid while braking with the front wheel?
2
What makes a skier turn when weight is applied on the front-inner side of the outer ski?
1
How (and why) is energy due to friction independent of speed?