When will a cubical shaped diamond in outer space transform in a spherical shaped one?

Suppose we were able to build up a diamond (it could also be another material, but the structure of a diamond is very solid, literally) with the form of a cube in outer space. Will the diamond remain cubical if we make it bigger and bigger? I suppose the diamond’s mass will become big enough at a certain point to transform its cubical shape into a spherical shape, and if so how can one calculate the length of the cube's edges when this happens?

EDIT
Maybe it's easier to ask, as Anders Sandberg commented, to ask if, and when, if so, a spherical diamant will start to contract if we increase the mass of the diamant symmetrically and (almost) continuously. Will the increase in mass of the diamant (or some other solid) cause a gravitational force at the surface which will overcome the force of the solid pushing outward, and, if so, at which radius will this occur? Or will the spherical diamant grow without limit?

Note that this does not mean nothing happens before. Diamond has a bulk modulus of 443 GPa, which means that at 100 GPa core pressure you would get a volume contraction of about 22%. So the crystal lattice would have to accommodate some strain, and I have no doubt there would be some risk of of cracking.

After reaching $P_{max}$ other forces will come into play, in particular electron degeneracy pressure. Basically one can model the further evolution of the diamond ball as a carbon white dwarf star at zero temperature. One of the interesting things with such degenerate objects is that they become smaller with increasing mass, so it is a reasonable bet that $r_{max}$ represents the peak size of the diamond object.

What about the cubical case? It is possible to get closed-form expressions of gravity in and around a cube. They are not particularly simple, and integrating them again to get the central pressure looks like it will give very messy algebra (or maybe I am just too lazy). Doing a numerical integration in Matlab along a line towards a face, towards a corner and towards an edge midpoint (plus comparing with the spherical case of the same volume) gives the following forces and pressures for a $2\times2\times 2$ meter cube: 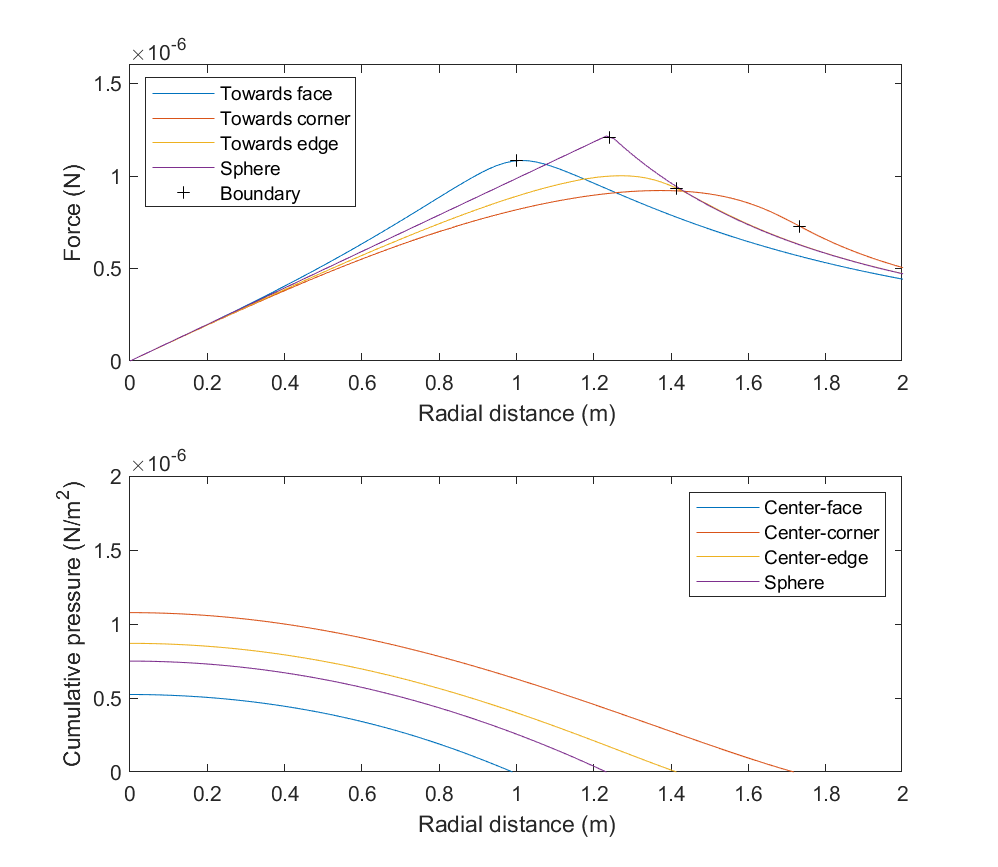 The sphere case gives a slightly smaller force but it extends further than the center-side distance, while giving more force than the corner directions that extend even further. Approximating the cube with a sphere does not give a too off answer.

We can see that the cube corners experience less force inwards than the faces, but they are significantly taller. The height wins: the pressure will be about twice bigger in their direction, and the alignment with the crystal lattice will really matter.

(EDIT: I redid my calculations, this time hopefully getting all coordinate lengths right.)

Not the answer you're looking for? Browse other questions tagged gravity solid-state-physics or ask your own question.