What exactly is delta-14C and why are there periodic plateaus in the delta-14C curve?

I downloaded the IntCal13, IntCal09, and IntCal04 datasets (parent site), and when I plotted the last 24k years was surprised to see a plateau or even reversal appear every ~5300 years. Apparently we are near the end of one of these periods now: 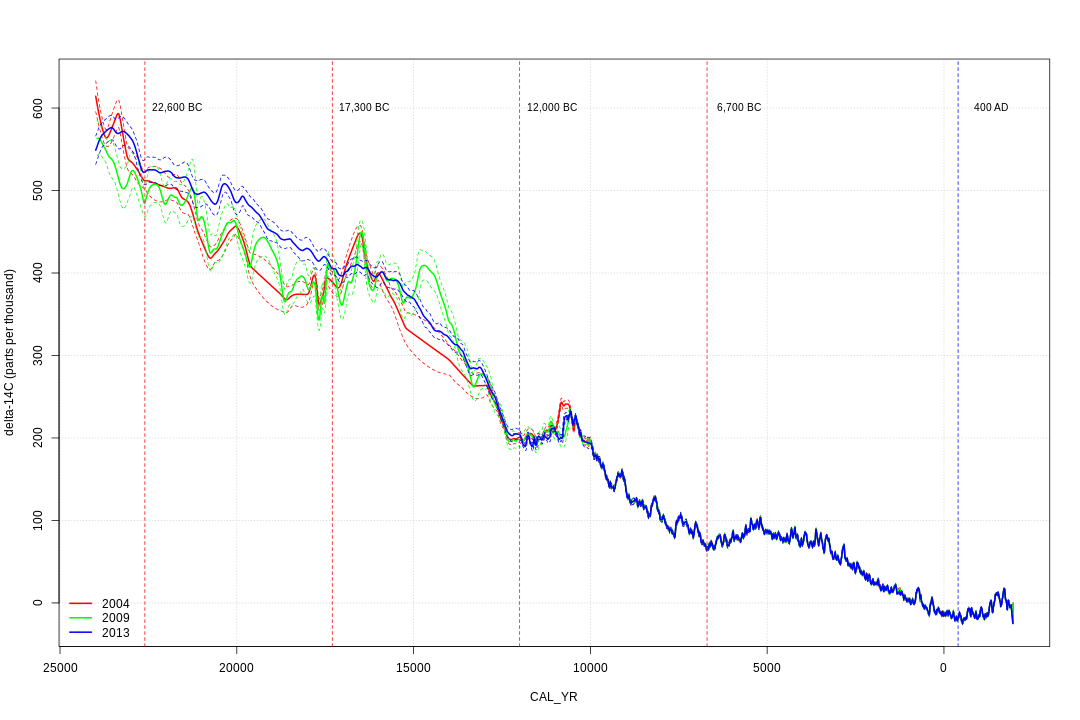 I came back to this as a reference and found that unfortunately radiocarbon.org seems to be down. There is a new site here, but the data is all still hosted at the radiocarbon.org domain...

Delta 14C is just the difference in carbon-14 from modern carbon-14 levels one finds in plants that died at some date in the past. Delta 13C is the same for carbon-13. The difference is that carbon-13 is stable and carbon-14 is not.

Carbon 14 has a half life of about 6000 years. This accounts for the steep slope in the graph, compared to that for carbon 13, which is stable and so has a nearly flat graph. Be-10 has a half life of about a million years so its slope is much gentler. Here's an article about Be-10 from ice cores: https://agupubs.onlinelibrary.wiley.com/doi/epdf/10.1029/97JC01282

Not the answer you're looking for? Browse other questions tagged sun radioactivity geophysics cosmic-rays or ask your own question.

2
Earth's magnetic field, could the poles be reversing?
5
Why are continents wider at the north and tapering towards the south?
1
Why are temperatures generally hotter in the Middle East than in Europe?
21
Are there Higgs bosons in the Sun?
35
If the gravity at the center of the Earth is zero, why are heavy elements like iron there?
49
Are there tides in the atmosphere?
1
Why are there more trapped protons during solar minima?