The Poisson ratio is, of course, the lateral expansion (contraction) associated with axial compression (elongation), expressed as the negative ratio of strains: $\nu=-\epsilon_y/\epsilon_x$.

Intuitively, when a beam bends with positive curvature, the top (bottom) side is in a state of compression (tension), which can be expected to distort the cross section because (for a material with a positive Poisson ratio) the top and bottom regions laterally expand and contract, respectively, known as anticlastic curvature: 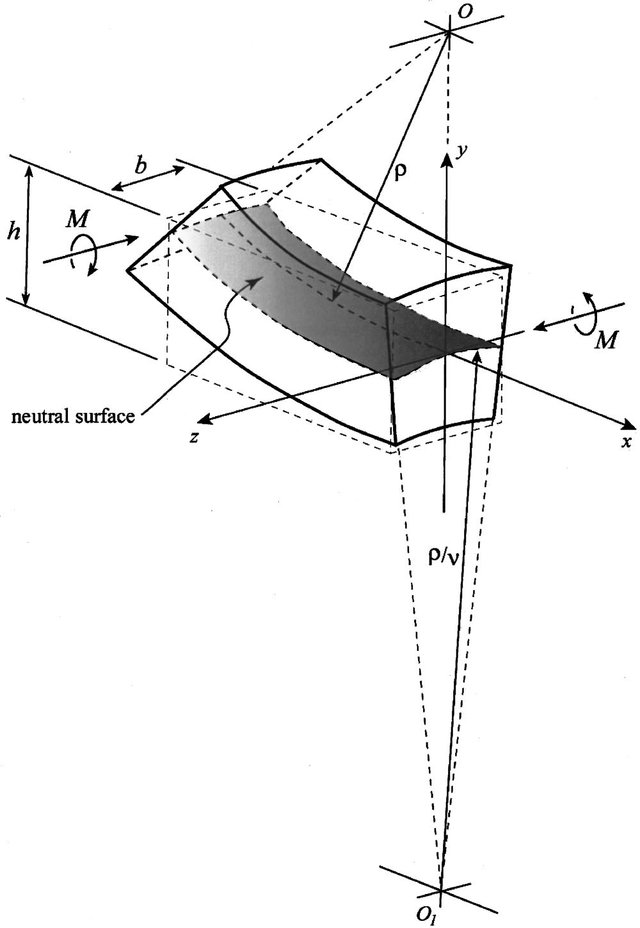 The Euler-Bernoulli equations assume that the beam is narrow enough that these strains are unconstrained. In other words, any lateral deformation of the beam encounters negligible resistance and therefore doesn't affect the deflection. The key constitutive equation that's being applied is $\sigma=E\epsilon$, or simple Hooke's Law, which doesn't feature Poisson's ratio.

In contrast, if you were to try to deflect a cantilevered plate, you'd find that the stiffness is higher than can be accounted for by just scaling up the beam width. The reason is that these Poisson-ratio-mediated lateral deformations are now constrained to be zero because there's plate material in the way. Another way of saying this is that the internal stress state along the length of the beam has transitioned from plane stress to plane strain. In isotropic materials, the appropriate 3D constitutive law is generalized Hooke's Law, which incorporates Poisson's ratio.

It's not surprising that the Poisson ratio has some influence on your numerical results, since you're working with a real beam whose cross section will be distorted somewhat; in addition, the composite lamina may tend to distort to different extents, which would produce an additional stress field in the cross section. The constitutive equation is now $\boldsymbol{\sigma}=\boldsymbol{C\epsilon}$, where the parameters are tensors and $\boldsymbol{C}$ is the stiffness tensor, which definitely incorporates Poisson's ratio (actually three — $\nu_{xy}$, $\nu_{xz}$, and $\nu_{yz}$ — because of the anisotropy).

So I'd recommend applying at least an approximately correct Poisson ratio for your materials to improve the simulation accuracy. A Poisson ratio of zero should bring you closer to the Euler-Bernoulli solution.

Poisson’s ratio, ν, is defined as

It is applied when analyzing the lateral strain on members subjected to axial forces (compression and tension). None of the beams in the diagrams of your link involve axial loading (loads applied to the ends of the beams along the axis of the beam). Nor do they deal with strain resulting from shear forces and bending moments. Therefore the Poisson ratio would not apply.

I ‘m not sure if this will help you, but the modulus of elasticity, $E$, is related to Poisson’s ratio, ν, by the following equation where $G$ is the shear modulus

One of the assumptions of Euler-Bernouli theory is that the cross sectional plane remains rigid. Consider a cantilever beam (slender) with rectangular cross section. The above assumption implies that breadth and height can NOT change even though there is extension in the longitudinal direction (unrealistic but that is the implication of the assumption). Thus poison ratio does not come into the picture. Section5 5.2 of the text book Structural analysis by O.A.Bauchau and J.I.Craig has good illustration of the implications of Euler-Bernouli assumptions.

Not the answer you're looking for? Browse other questions tagged classical-mechanics solid-mechanics structural-beam or ask your own question.

3
Large deflection of cantilever beam
3
Limits of Poisson's ratio in isotropic solid
2
Why is deflection at the boundary 0 for the given statically indeterminate beam problem?
16
Similarity between Schrodinger and Euler-Bernoulli equations - any possible physical meaning?
0
3D beam deflection
1
What is the stress distibution in a cantilever non-slender beam?
0
Cantilever Beam Deflection with load in middle of beam
0
How is this basic equation of a Timoshenko beam derived?