Could a trajectory around a large mass ever deflect by more than 180 degrees due to general relativistic effects?

Possible mechanisms that could be an answer to the question What natural mechanisms could lead to the unlikely case of the same rogue asteroid or planet passing through our solar system twice? include sequential hyperbolic orbits around two stars.

Suppose instead a small body impervious to disintegration by tidal forces or radiation were to pass very close to a very massive object, perhaps a black hole a bit beyond the Schwarzschild radius at closest approach due to general relativistic effects, then continue on into space.

Asymptotically, could the final direction differ by greater than 180 degrees, such that its outgoing trajectory intersects its incoming trajectory at some finite distance?

The extent of my exposure to GR is this approximate equation (described with citations in this answer) commonly used to approximate GR effects within the solar system, but I think this question needs to be addressed at higher level and beyond a low-order approximation.

should be added to the Newtonian term:

For a test particle there is no limit on how many "laps" a hyperbolic orbit can make before it returns to infinity. However, once you start accounting for the objects own mass, there will be a practical limit to the number of laps it can make due to losing energy and angular momentum. The critical case was examined in this paper by Gundlach, Akcay, Barack, and Nagar. In the limit that the scattered object is still very light compared to the black hole, they find a maximum of about $.41 m_1/m_2$ where $m_1$ the mass of the black hole, and $m_2$ is the mass of the small object.

So, yes a scattering angle of 180 degrees is well within the realm of possibility.

The approximation you mentioned is the post-Newtonian expansion at the first, 1PN level. As you can see it introduces two velocity-dependent components and one repulsive inverse r-cube component. If you try to apply it in the strong field limit you get very strange results, as seen in this answer. The post-Newtonian expansion is available also at the 3PN-level. At the 3-PN level more velocity-dependent terms are introduced as well as a attractive inverse $r^4$ term and one repulsive inverse $r^5$ term. I have not checked out those orbits yet. However, at the 1PN level you can not really reproduce the expected strong field orbits. If you use this (not officially sanctioned) expression for the relativistic acceleration instead:

you can reproduce orbits as seen below. The green circle is the Schwarzschild radius and the red circle is at the "innermost stable circular radius" located at a radial distance of three Schwarzschild radiuses. If you look closely you can see that in the upper left plot the planet completes two revolutions between consecutive aphelions. In the upper right it completes three revolutions between aphelions and in the lower left it completes four. The mimimum radial distance I got with the lower left simulation was at a little bit more then 2.98 Schwarzschild radiuses. If you want to reproduce the results you can start with Mercury at aphelion and then scale up the relativistic effects by increasing the initial velocity with a certain factor and decrease the initial radial distance with the same factor squared. In the plots I used factors of 1668, 1682.167, 1682,452 and 1682.45768. Depending on step size etc. you might get to use slightly different values to get the same symmetry. 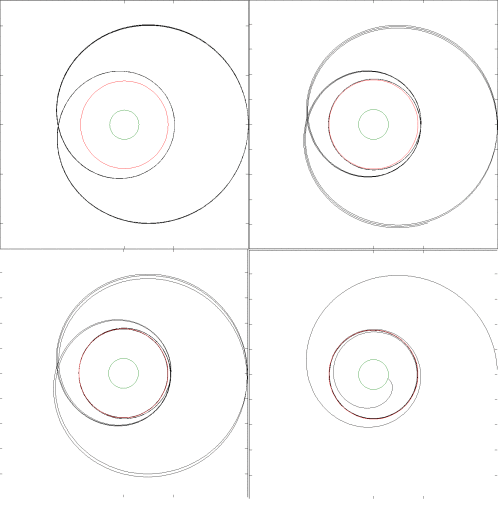 Not the answer you're looking for? Browse other questions tagged general-relativity orbital-motion or ask your own question.