Measuring the Momentum of a Quantum System using Position Measurements

A basic way to measure the momentum of a charged particle is to know that (classically) it follows a circular trajectory in a uniform magnetic field perpendicular to the plane of its trajectory, with a radius $R$ given by $$R=\frac{p}{eB}$$ in the nonrelativistic regimes, where p is the momentum of the particle, e its charge, and B the magnetic field strength.

Reading in my quantum mechanics textbooks, the basic idea thus to measure momentum is by sending a stream of particles through a slit as shown in the figure below, which guarantees (classically) that the momentum is essentially in the $+\hat{z}$ direction. Beyond is a region of uniform magnetic field, followed by a set of detectors. If the intensity of the source is very weak, flashes will appear on the detectors one by one; and using the expression for $R$ we can associate with each flash a value of momentum in the $+\hat{z}$ direction depending on the position of the flash, $p = ReB$. 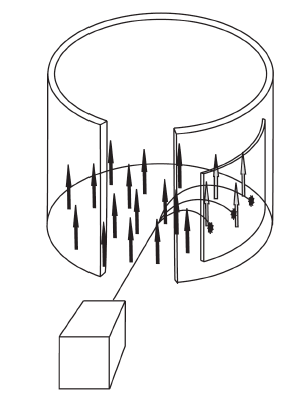 My confusion however comes in that in order to measure the momentum, we have measured the position of the particle as well! If we can see the point at which the detector flashed, we have certainly determined the position. Thus again, we know the position, and we also know the momentum. This seems to violate Heisenberg's Uncertainty principle! What am I missing here?

The problem is that the equation you wrote cannot be correct at a fundamental level. In fact the equation is not compatible with the canonical commutation relation

In other words $\mathbf{p}$ cannot be a function of $\mathbf{x}$ otherwise the variables would commute.

Not surprisingly Eq. (1) is at the basis of Heisenberg's uncertainty principle.

Not the answer you're looking for? Browse other questions tagged quantum-mechanics heisenberg-uncertainty-principle quantum-measurement or ask your own question.

3
Is it possible to know the exact values of momentum and velocity of a particle simultaneously?
1
Weird Behaviour of the act of measurement to a quantum system
11
Shouldn't the Uncertainty Principle be intuitively obvious, at least when talking about the position and momentum of an object?
59
Is the uncertainty principle a property of elementary particles or a result of our measurement tools?
2
Does every interaction of quantum objects introduce backaction?
2
Non-locality in non-relativistic Quantum Mechanic
2
Why do $\hat{X}$ and $\hat{P}$ have to correspond to position and momentum?
7
Is the trajectory of a quantum particle a well defined concept and how does this depend on the interpretation of quantum mechanics?
0
Problem understanding Heisenberg's uncertainty principle