Why is there so much iron?

We all know where iron comes from. However, as I am reading up on supernovas, I started to wonder why there is as much iron as there is in the universe.

Do Type I supernovas happen so frequently that iron is this common? Or am I missing something?

The solar abundance of iron is a little bit more than a thousandth by mass. If we assume that all the baryonic mass in the disc of the Galaxy (a few $10^{10}$ solar masses) is polluted in the same way, then more than 10 million solar masses of iron must have been produced and distributed by stars.

Given the age of the Galaxy of 10 billion years, this requires a type Ia supernova rate of one every 200-500 years.

The rate of type Ia supernovae in our Galaxy is not observationally measured, though there have likely been several in the last 1000 years. The rate above seems entirely plausible and was probably higher in the past. 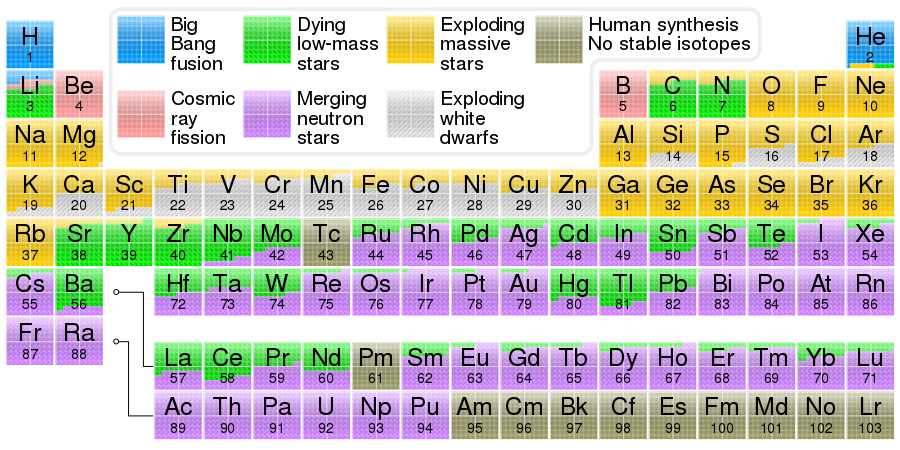 (One of many amazing images by Cmglee )
Periodic table showing the cosmogenic origin of each element. Elements from carbon up to sulfur may be made in small stars by the alpha process. Elements beyond iron are made in large stars with slow neutron capture (s-process), followed by expulsion to space in gas ejections (see planetary nebulae). Elements heavier than iron may be made in neutron star mergers or supernovae after the r-process, involving a dense burst of neutrons and rapid capture by the element.

Iron is at the minimum point for energy release from fusion. For all atomic numbers less than that of iron, there is a net release of energy as additional protons and neutrons are added. Beyond iron, it's the reverse; energy must be input to fuse protons and neutrons into larger nuclei, which is why larger nuclei are only formed in supernova-type events and larger nuclei release energy on fission. As long as there are conditions to drive these processes, the tendency will be to build smaller nuclei up to iron and split larger nuclei down toward iron.

The nucleosynthesis in the inner of the stars generates energy: The huge amounts of energy form Helium from hydrogen. The star then start generating carbon from helium and so an. This finishes with iron. To generate with larger atomic numbers the star needs more energy. Most of them are generated in supernovae, where there is a lot more energy.

Not the answer you're looking for? Browse other questions tagged astrophysics astronomy supernova or ask your own question.

41
What is the origin of elements heavier than iron?
19
What happens to the neighboring star of a type Ia supernova?
9
New Type of Type Ia supernova. Implications to Dark Energy measurement?
0
Possible intergalactic celestial objects
1
Type II supernovae explosions
16
Can nuclear fusion alone account for the energy output from type 1a supernova?
8
What is the theoretical lower mass limit for a white dwarf?
3
Is the remnant of the Solar System's "parent" star still drifting in outer space?
1
Understanding the Chandrasekhar limit for white dwarfs and its relation with supernovas
2
Neutron star forms after merging of white dwarfs?