Query about the Michelson interferometer 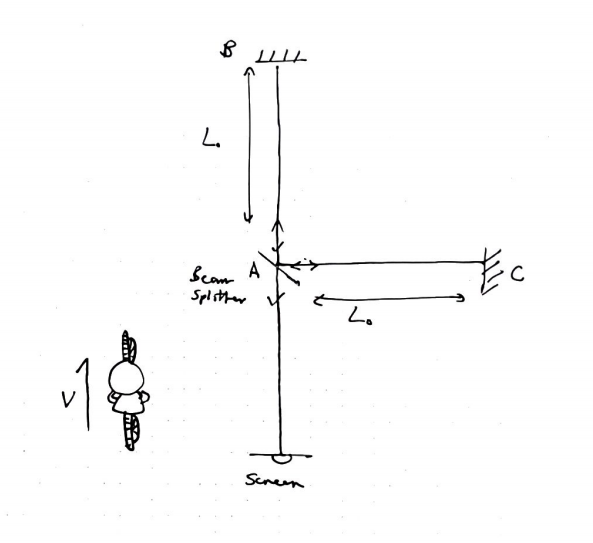 Say I am cycling past a Michelson interferometer set up. Someone at rest with the experiment will see both beams travelling a distance $L_0$ and hence conclude that $T_{AB}=T_{AC}=\frac{2L_0}{c}$.

However, according to me, the beam AB will not be travelling $L_0$, but a contracted distance $\frac{L_0}{\gamma}$, hence $T_{AB}=\frac{2L_0}{\gamma c}$. As AC is perpendicular to me and hence there is no relative motion along that axis, I don't observe AC to have any length contraction. However, I do still observe the whole light clock effect or time dilation. According to the observer at rest with the set up, the light beam travels along a horizontal line. According to me however, it travels diagonally, and the overall path $ACA$ describes a triangle. Hence, I see that $T_{AC}=\frac{2L_0 \gamma}{c}$.

This seems to imply I will observe interference while the observer at rest with the set up will not.

Browse other questions tagged special-relativity interference time-dilation or ask your own question.

21
Time dilation clock experiment: what would happen if the clock were flipped 90 degrees?
14
Help Me Gain an Intuitive Understanding of Lorentz Contraction
10
Does special relativity imply that time dilation is affected by an orientation of clocks?

19
Limitations on how far one can travel in the universe
0
Help getting my head around frames of reference in special relativity
2
Confusion about proper time in special relativity
3
Why are the proper time and the proper length not defined in the same frame of reference?
1
Feynman Lectures on Physics, Michelson Morley question about angle of light
0
Constructive interference and maximums of interference
2
Special Relativity: Length Contraction Confusion
1
Difference between two derivations of length contraction?
2
Derivation of Lorentz Contraction WITHOUT light roundtrip
0
Time difference evaluation in a Michelson-Morley apparatus with arbitrary orientation